Trying On Our Big Sailor Panties

We've spent so much of our mental energy in just getting to the Bahamas, we hadn’t really given much thought to where we would go once we had made the crossing.  Our time on Bimini gave us a chance to relax and regroup.

Back in the States, moving around was a matter of deciding where we wanted to go and just going there.  Here it’s a whole new world, gone are the protected waters of the ICW...  This is where it gets real.  We have to really PLOT our course and plan what we will do each day.  And if we thought the weather was our master before… well, it’s really in control now.

Bruce and I had thrown together a sort of plan with the goal of eventually getting to New Providence to receive guests.  The morning of our departure arrived and the weather report said our plan was caca!  The west winds we thought we would have were gone... replaced winds out of the NNW which would make our planned stop at Morgan’s Bluff on Andros Island a rolly nightmare.  So very quickly we took another look at the charts and possible reachable anchorages and revised our plan.

During dinner last night, we had a conversation about possible routes with another cruiser.   He questioned our choice to go north around the top of Bimini.  Well it’s “what everybody does” we said… But when we took another look at the charts, we realized that there was a southern route that looked just fine.  Plus we wouldn’t have to motor into the forecast north winds…

Moments before we left the dock, we had a visit from Stephan, a temporary resident at Brown’s.  He has been very friendly and helpful to everyone on the docks, but he became very agitated upon hearing our planned route.  He said that he had 5 ft draft and had drug bottom endlessly going around the south of Bimini on his way here.  Furthermore, he said that we should NOT sleep on the Banks as it’s dangerous and unpredictable.  He had lost all of his ground tackle and nearly died trying it as the waves suddenly came out of nowhere.  So as we shoved off I was having my doubts about our plan…

We left the slip at nearly low tide and turned towards the gap.  There was a bit of swell as we favored the red side.  There was one skinny spot (but we never bumped) just as we approached the second to last channel marker then the depths opened up and we turned south against all dire warnings from Stephan.  At some point, each Skipper must separate the hysterical bla bla from rational fact, put on his/her Big-Sailor-Panties and trust your own ability to gather knowledge and plot your course.  So that is just what we did... 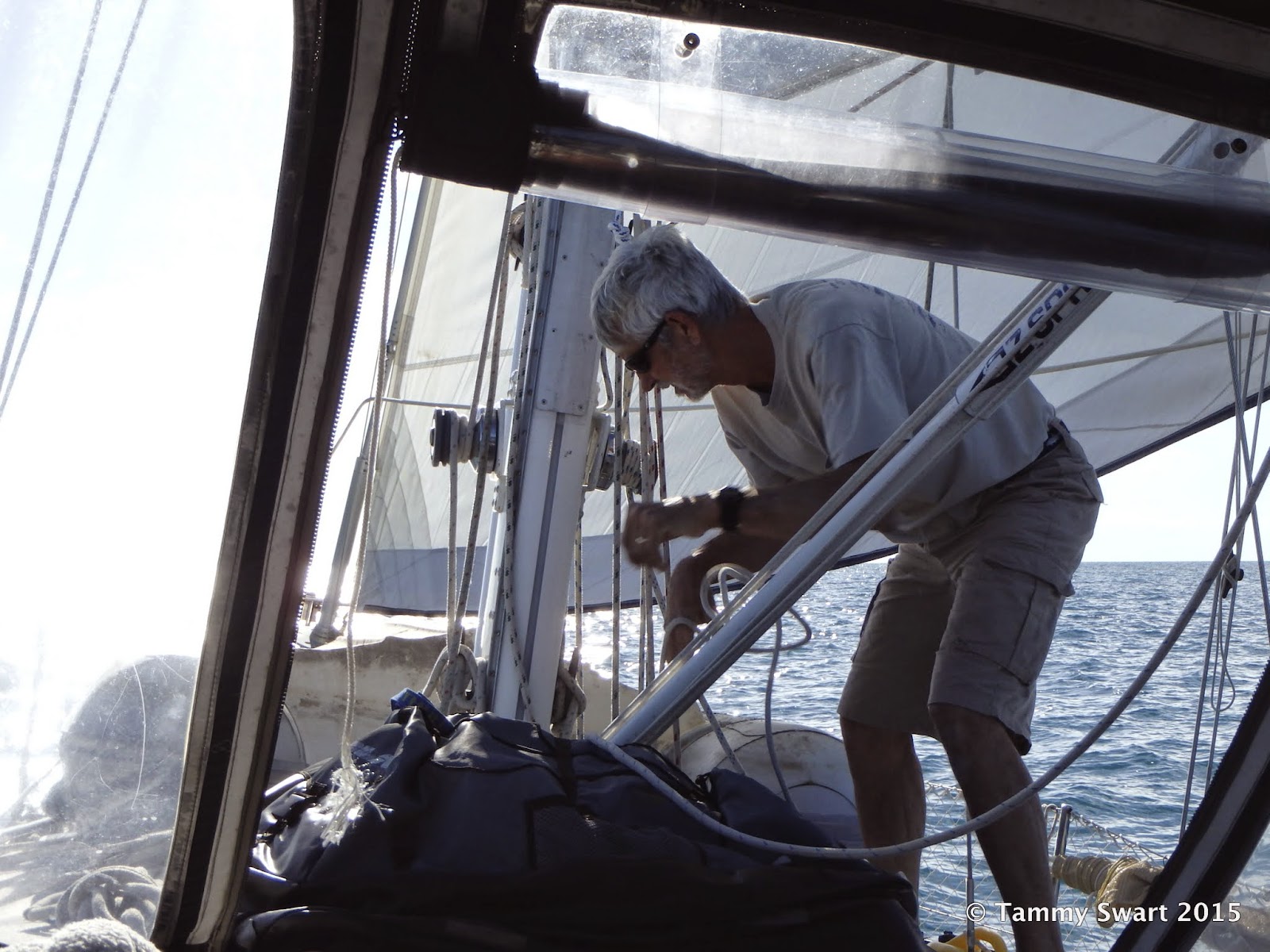 Bruce raised sails and we switched the engine off!  We were SAILING!  We glided along past small islets, watching the rising sun sparkle on the deep blue water.  We found the passage just past Triangle Rocks and nervously turned SE.  For a while we picked our way but soon realized that the depths were good, averaging at least three feet above what was charted, even though it should be low tide.  (I haven’t quite got the feel for the tides here yet) 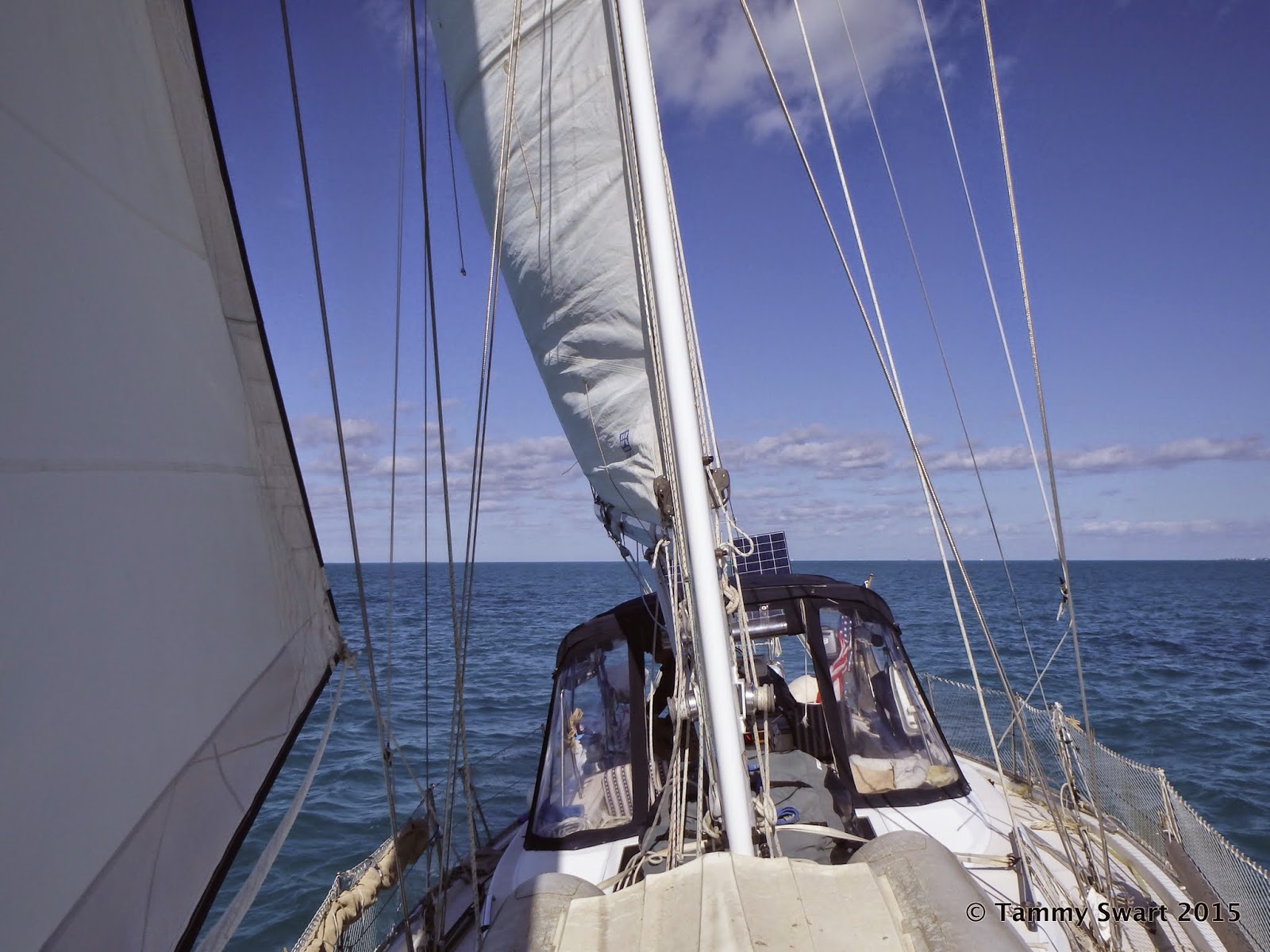 We followed our route and spent the day tweaking sails and gawking at the beauty around us.  Our cheeks are red with pinching as we are still just not quite sure that this is really US... HERE... sailing around in the Bahamas... FINALLY!!!

The winds were on the light side, probably 8 to 10 knots out of the NW and north.  We were doing maybe 4.5 knots but we didn't really care... our plan was to stop somewhere on the banks whenever it got dark, hopefully we would at least make Mackey Shoals...

The cats became confused when the engine shut down... There was no noise and the boat is relatively calm and level... yet we're still moving!  What a concept! 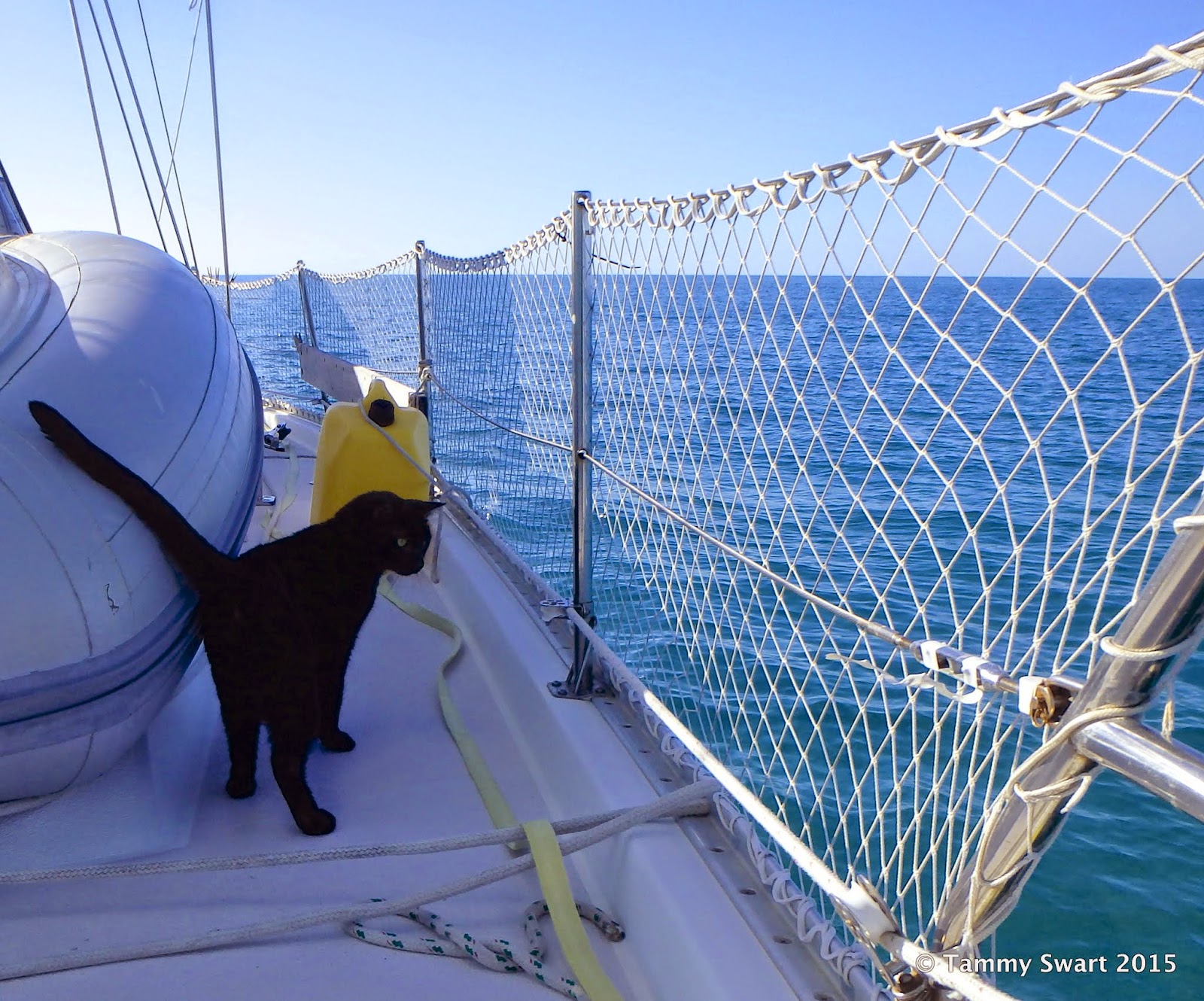 They came out on deck and hung out in the cockpit with us the whole time.  Life resumed a normalcy... but it was nothing like our old normal.

I can't tell you how glad we are that this was not traumatic for the cats.  We have made so many decisions about when and where to go, based upon how it would affect our international feline passengers.

By mid-day, the winds became so light our speed dropped below four knots.  We had to fall off course just to remain in motion so we decided to start the engine and motorsail for a while. 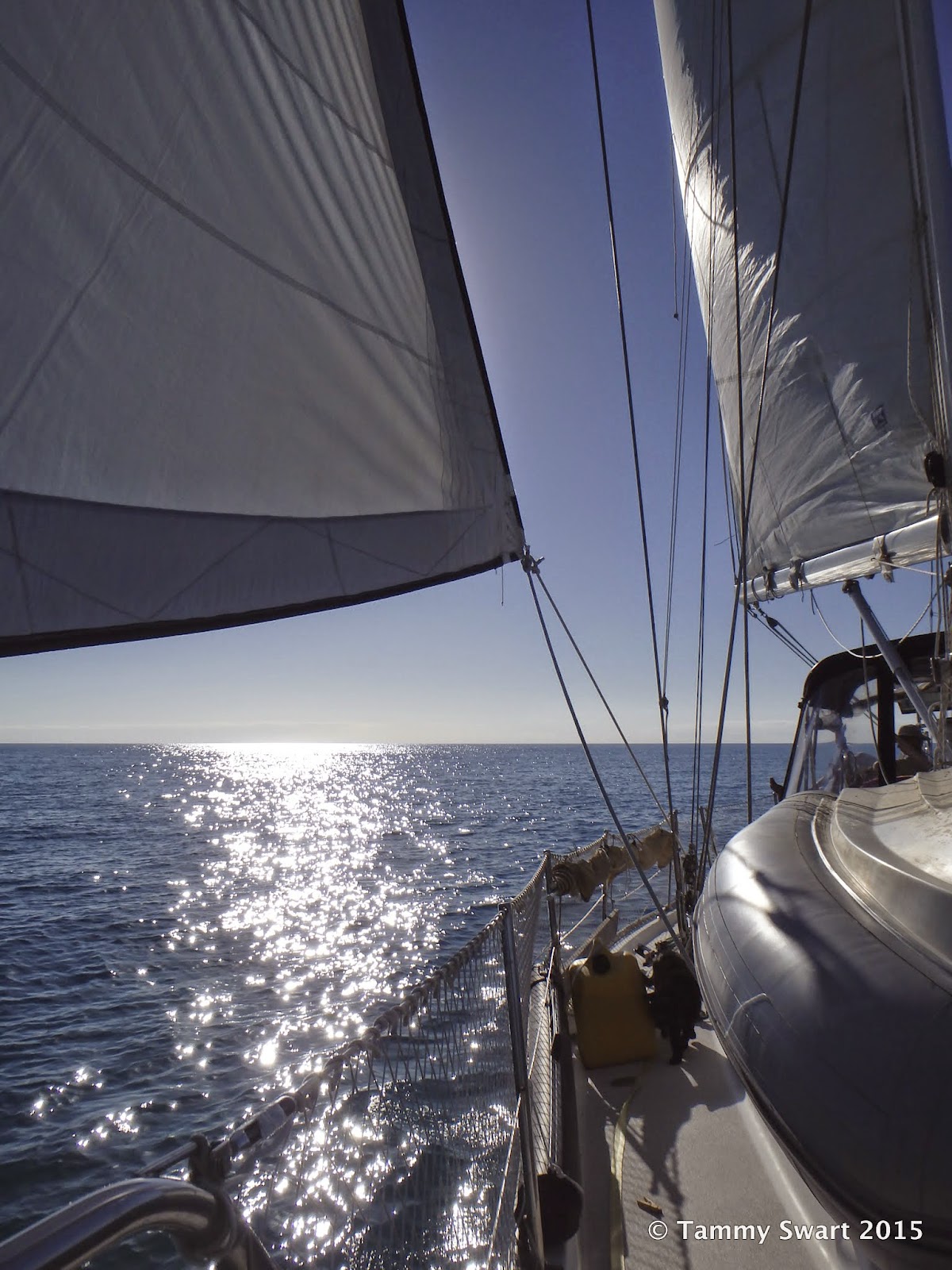 We reached our intended anchorage spot at the south end of Mackey Shoals at around 3 pm but decided there was no reason not to keep going as far as we could get.  We turned off the engine again and raised sails and settled in to just enjoy the afternoon.  We're sailing and it feels so good. 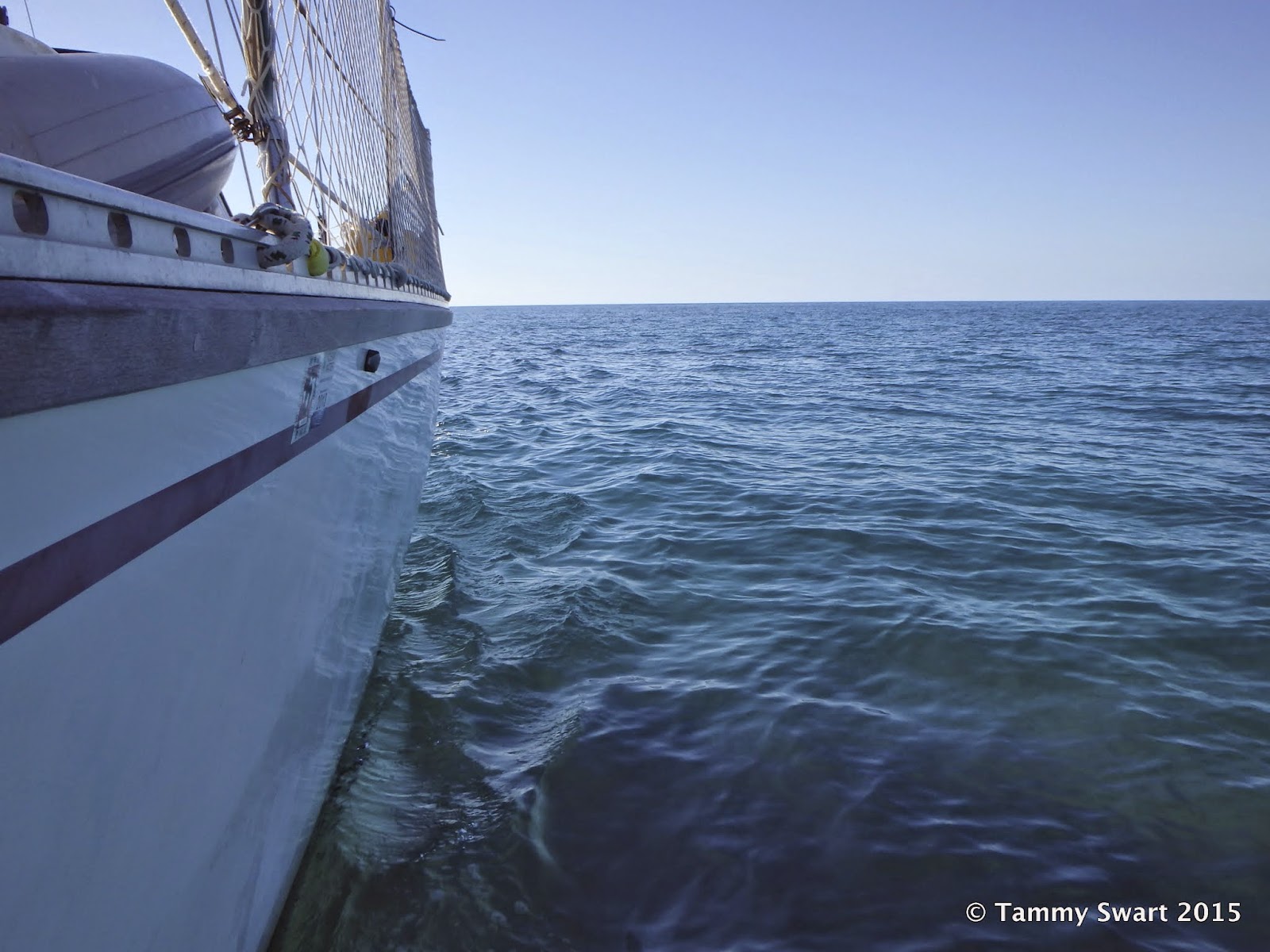 We didn't care if our speed fell below four knots, we just hung out on deck and watched the sun get lower and lower in the sky. 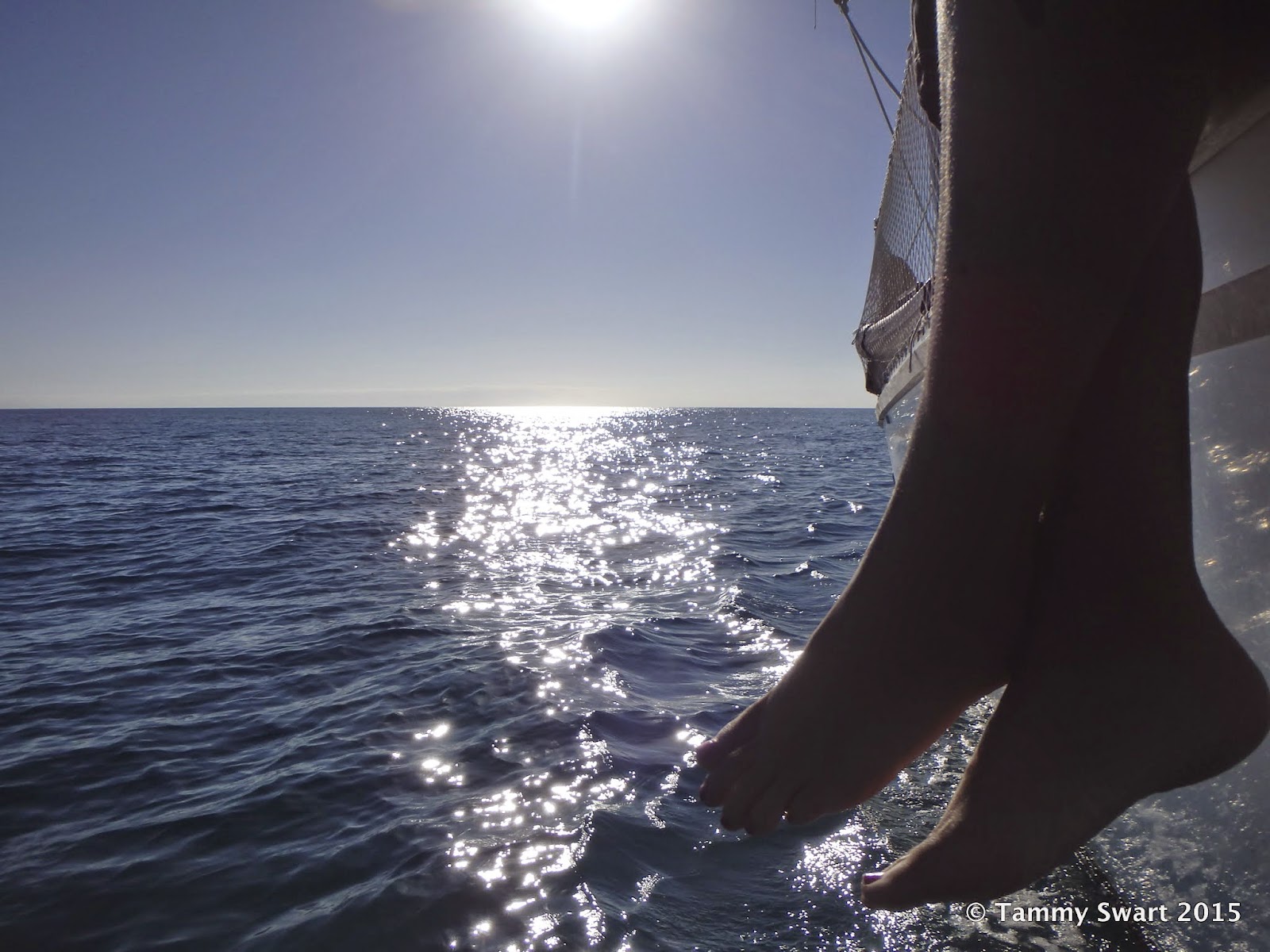 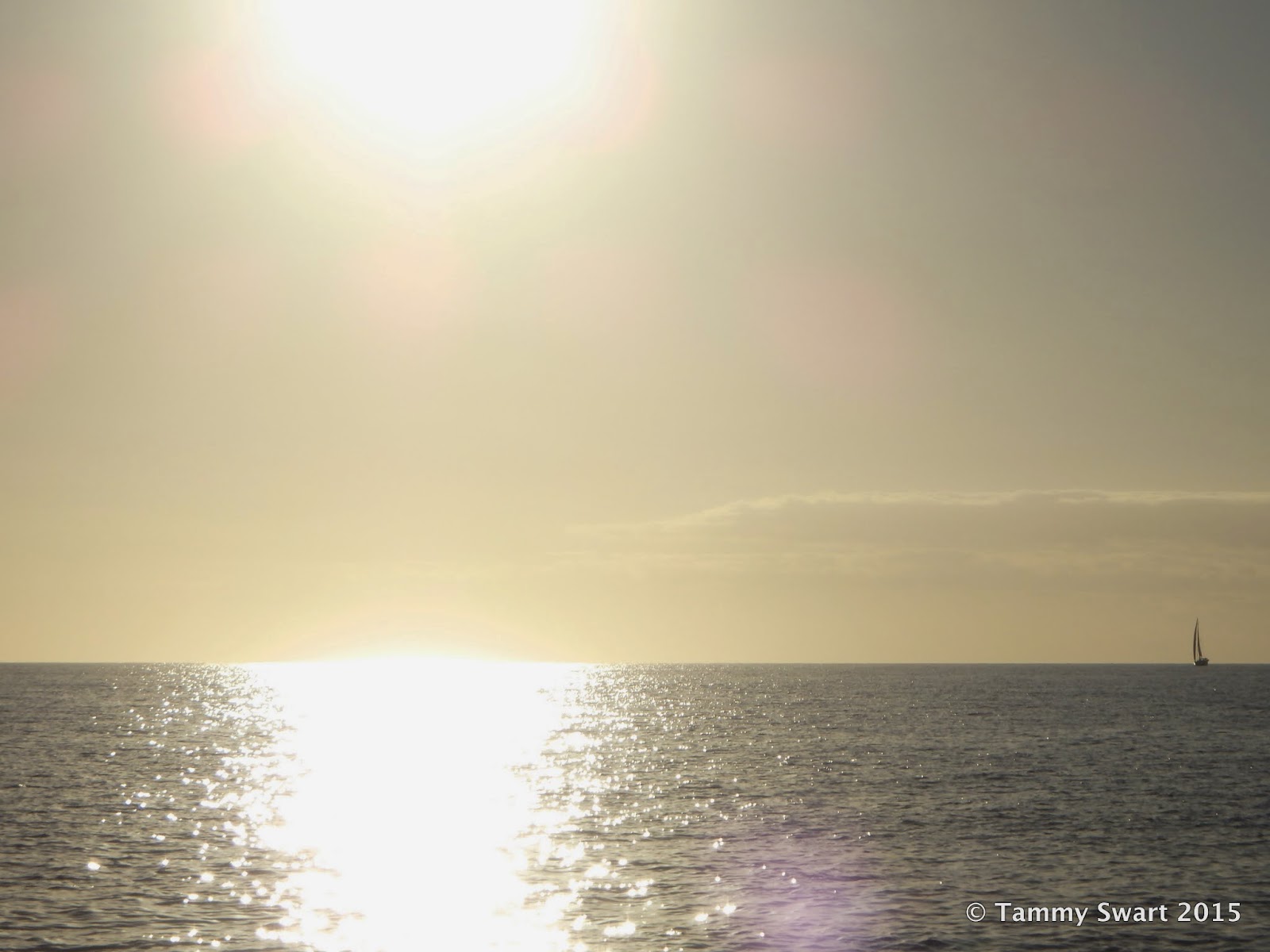 Bruce and I had many abstract conversations while drifting along...  As we sat together snuggling on the foredeck, I remembered our first date.  It was February 23, 2000.  Bruce invited me to go sailing on his CS33, Artemesia.  We sat there on that deck, much as we sat here now, some 15 years ago...

Only then it was different... we were uncertain of one another.  We were just starting out with no idea where it would go...  How amazing it is that THIS is where that blink of an eye in time would eventually lead.  We thought back on all the things that had filled that 15 year gap between then and now... It all seemed to be building up to this one moment.

We drifted more and more slowly until finally we dropped sails and anchored the boat for the night.  It didn't really matter if we were set or not... there was nobody else around within sight and the forecast was benign.  The water was nearly flat with just a gentle roll and the winds were dropping.

We enjoyed the sunset and a simple dinner, eagerly awaiting a green flash that didn't come.


Then we watched the colors of the night creep up on our little cosmos.  It was stunningly peaceful and profoundly simple.  The pictures do not do the depth of these colors justice..

The moon rose in the night.  It was completely dark but for the moon and stars.  Nothing for miles around to generate light.

We slept soundly until about 2 am.  The winds came up suddenly, nothing bad, just enough to generate a stiff chop.  We dozed the rest of the night after checking things out on deck... 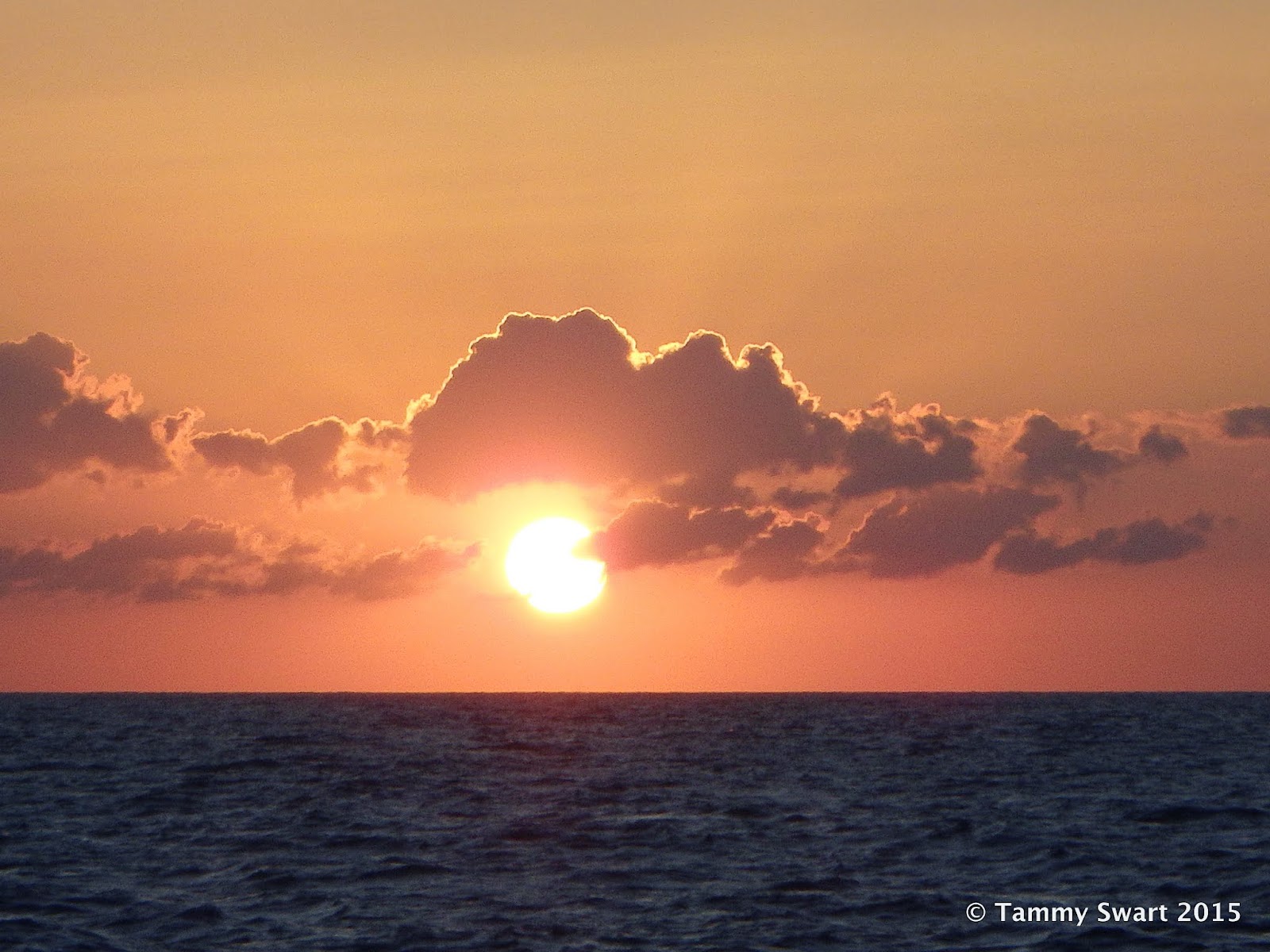 We awoke before dawn and enjoyed another sunrise...  No need to rush off.  We had breakfast and got ourselves ready for a nice sail.  If these winds will hold we'll be setting anchor again by mid-afternoon. 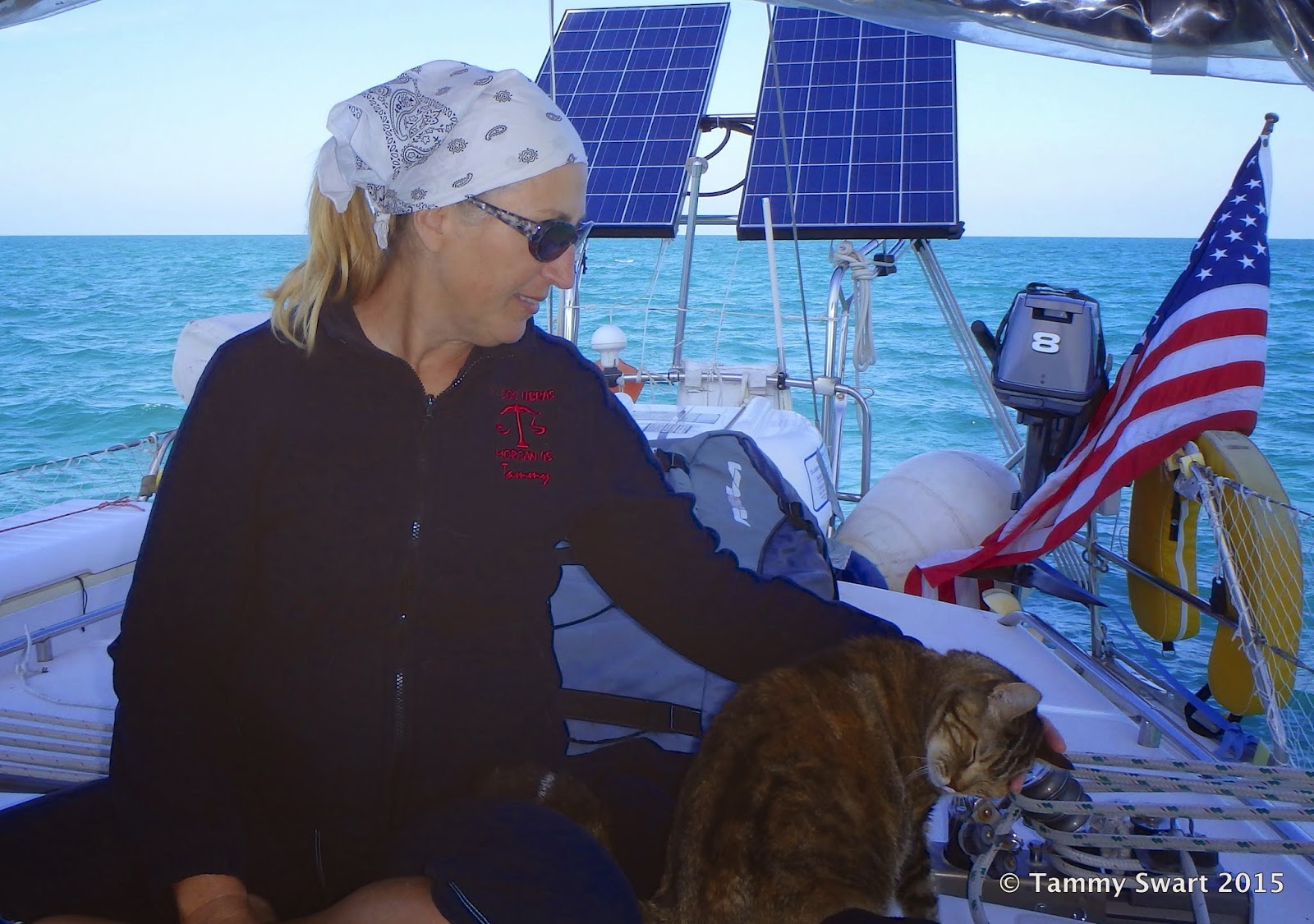 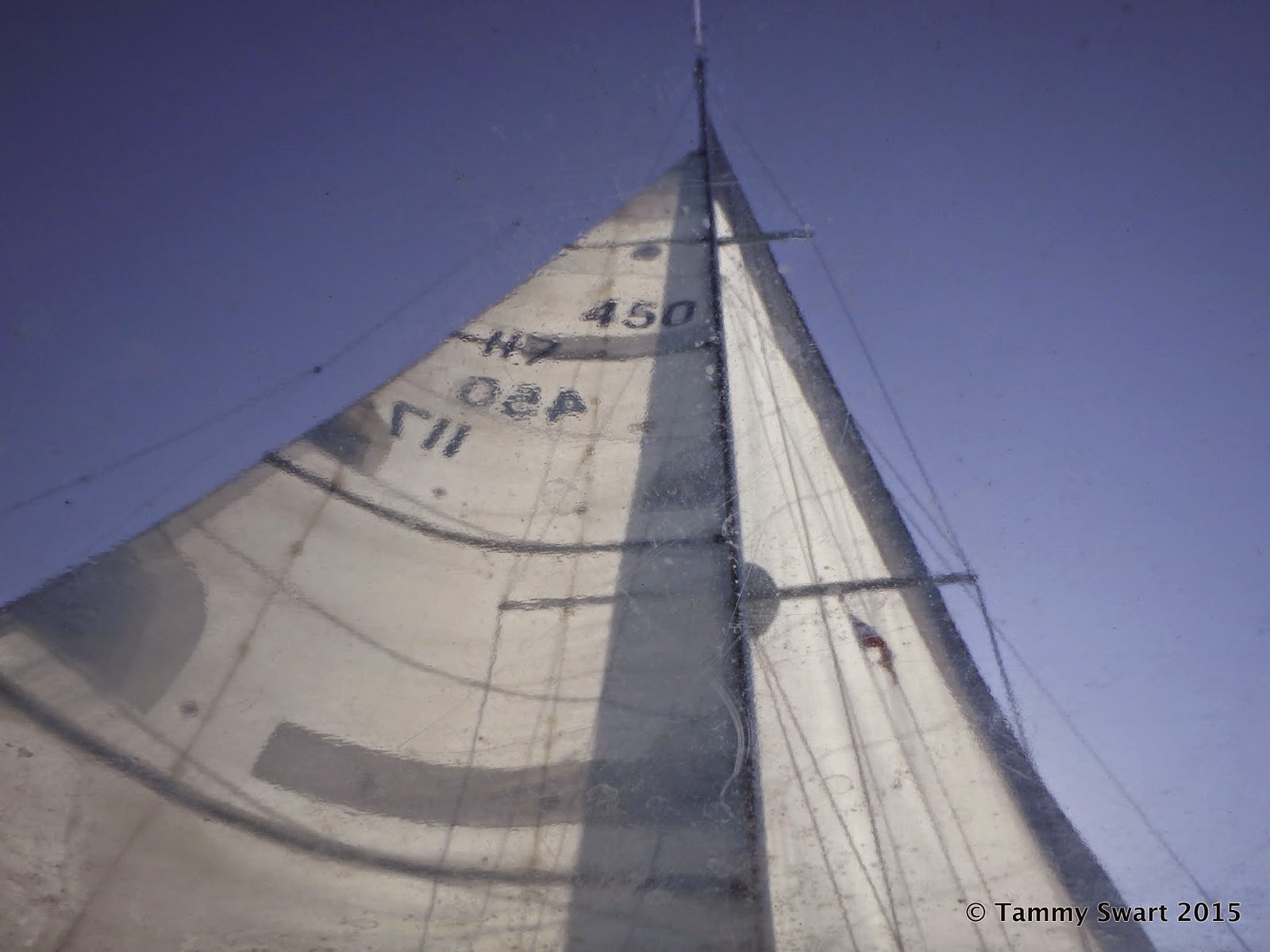 We set sail and took off... for a while.  By mid morning the winds had moderated and we were doing around 5 knots wing on wing.  Bruce and I spent the day tweaking sails and gybing back and forth.  It seemed that conditions were changing and changing again but we were enjoying the refresher course.  It's been a LONG TIME since we got to use these babies! 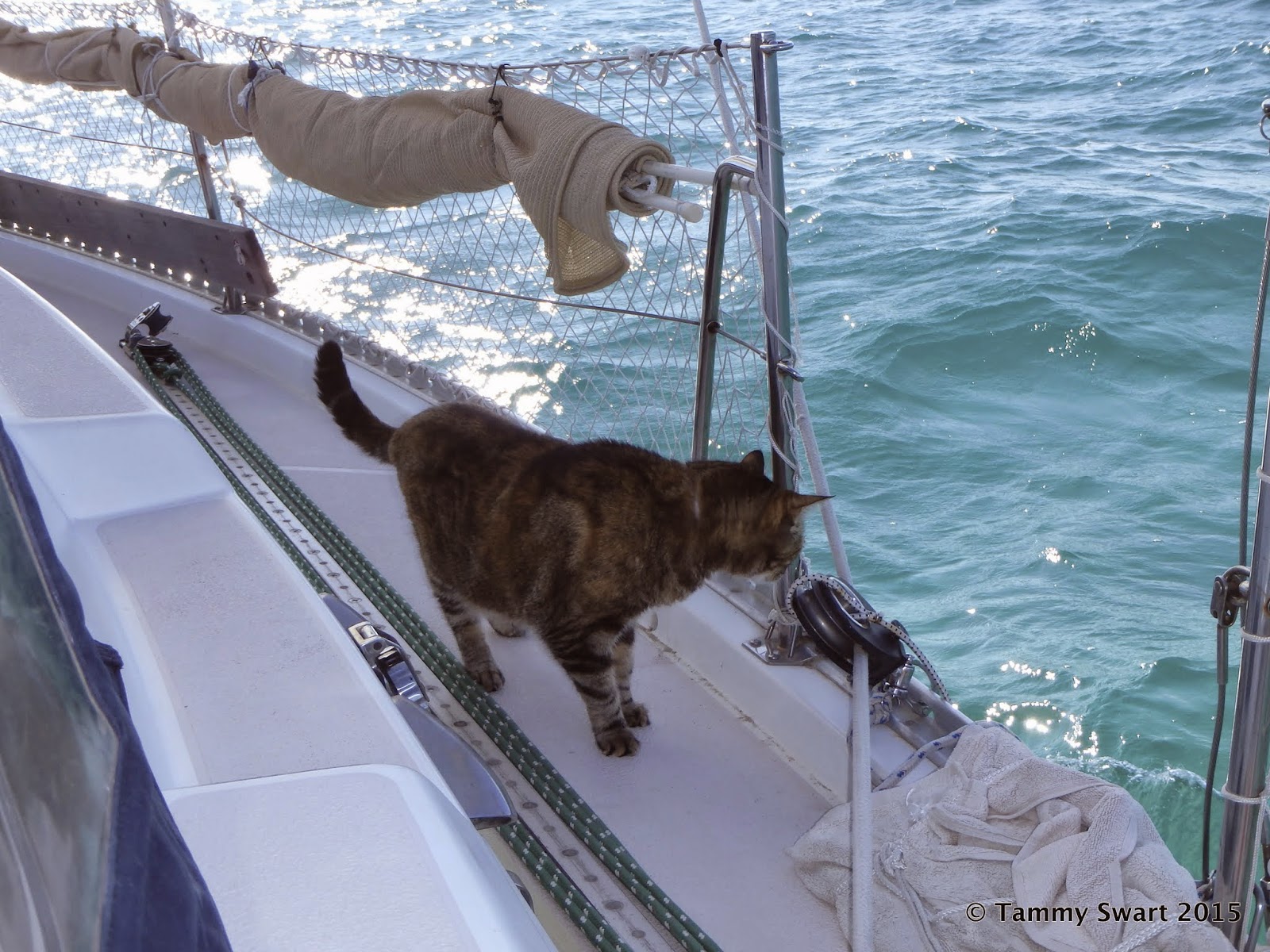 The sail configuration and calming seas had us moving along flat and happy...  I have to wonder what's going on in the tiny little minds of our kitties... They seem to just take it all in stride. 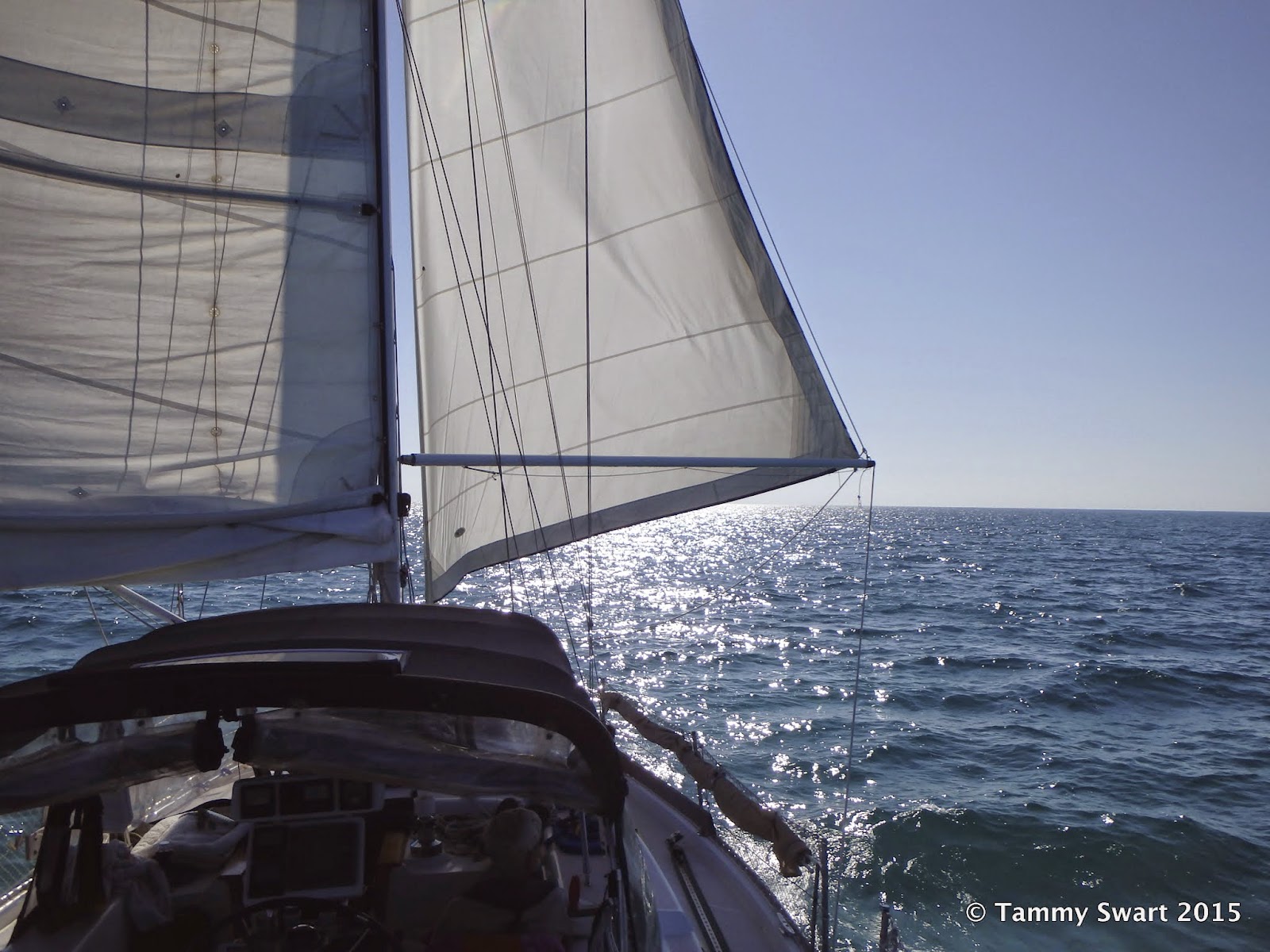 Our challenge for the day was to exit the Grand Bank and  pass through the entrance to the Northwest Channel.  There was mention of a missing marker and the possibility of rough seas if the wind and current were in opposition.  I haven't really found much to tell me about the currents here in the Bahamas so we were hoping for the best. 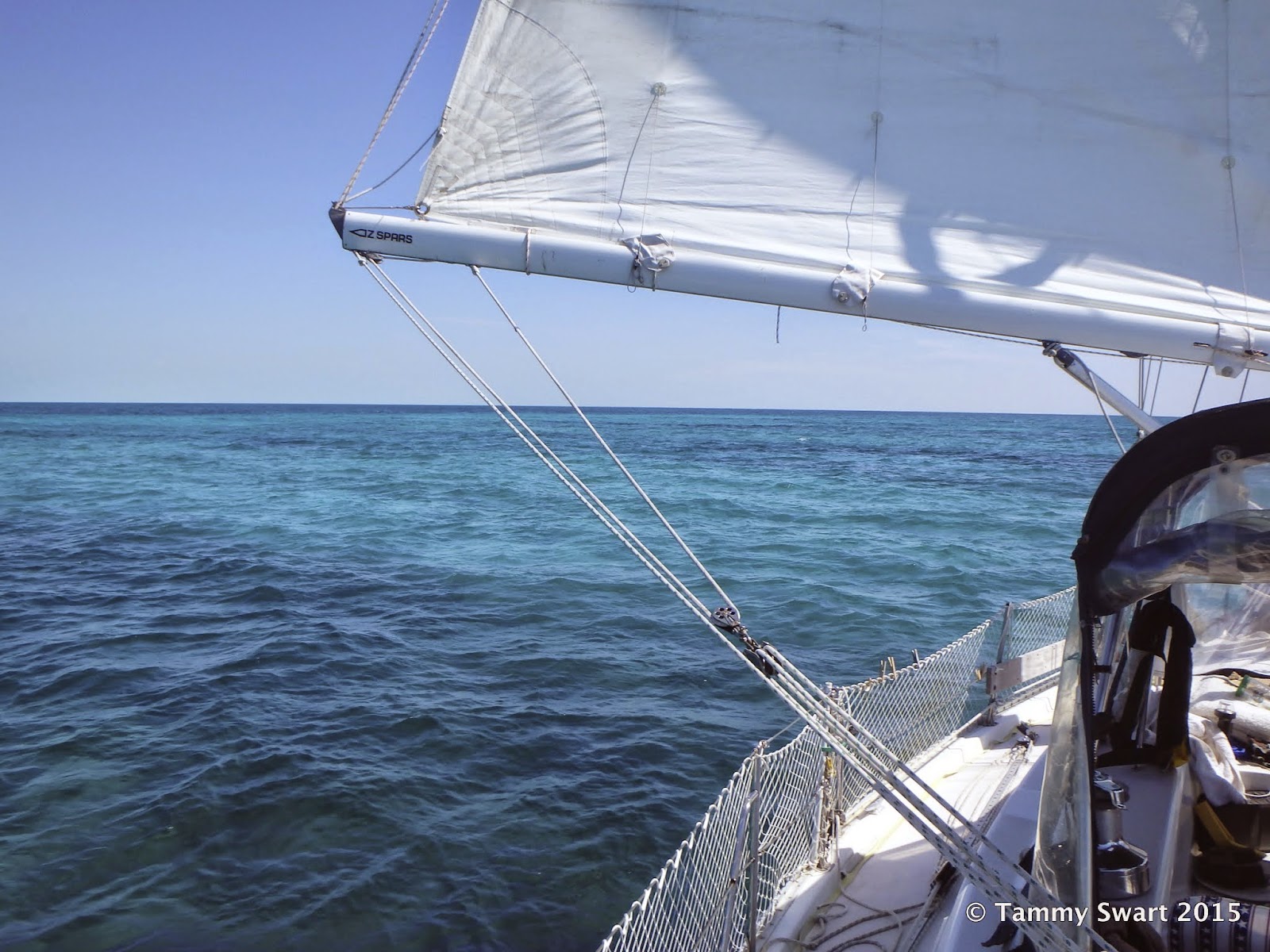 Our exit turned out to be a non-event. We never saw shallow water and there was no extra chop... we were suddenly in waters that were thousands of feet deep.

They went from glowing emerald green to the deepest of true blues.

We continued on in the deep water with no thought of what lie below us.  All our time was spent keeping the boat going, trimming sails and watching the wind indicator. 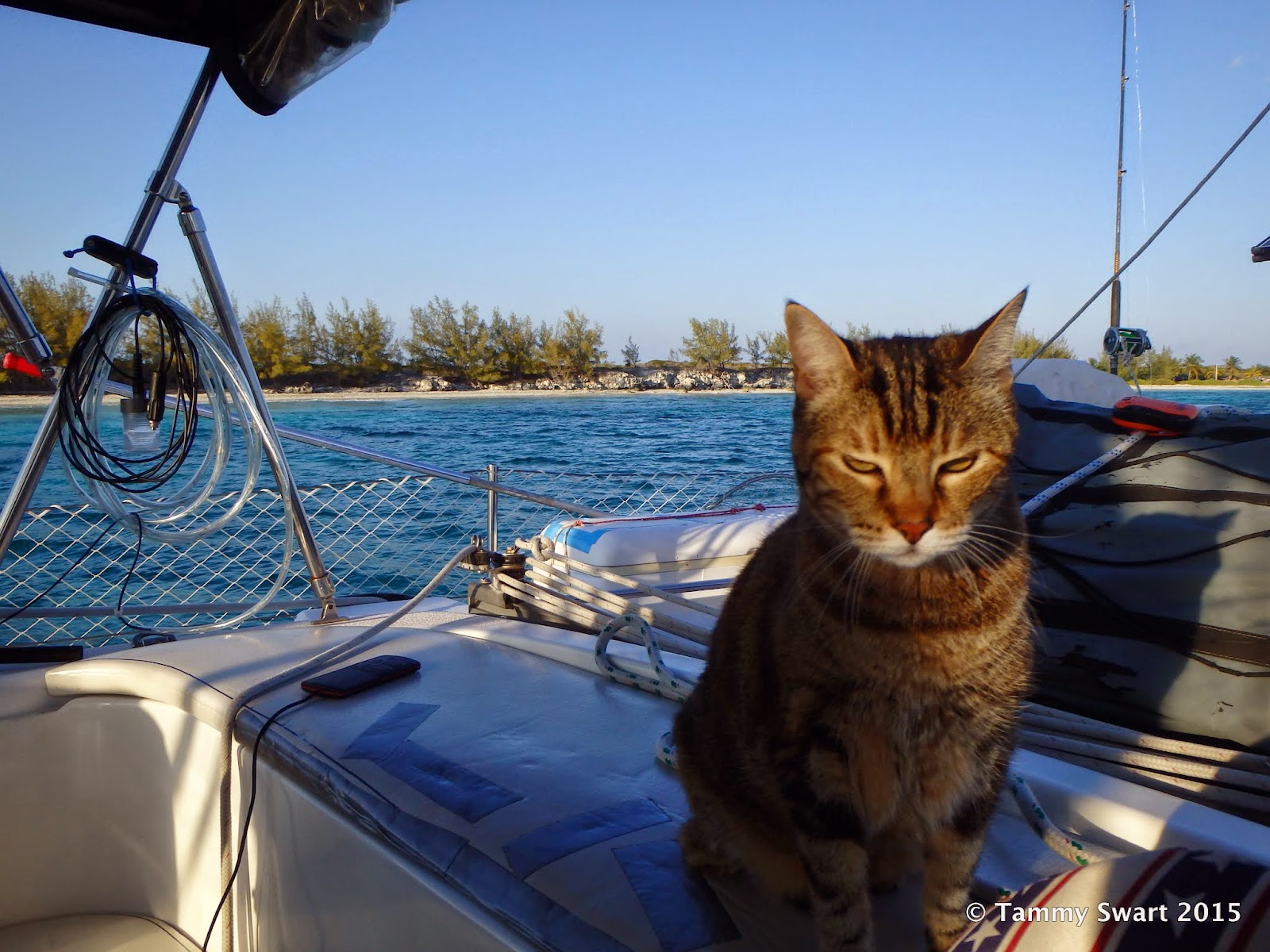 By mid afternoon we were picking out a spot.  We had chosen the south side of Chub Cay for protection from the forecast big north winds in the coming days.  N25°24.414, W077°51.320.  We headed towards an inviting spot between Chub and Diamond Cay, but decided at the last moment to veer further to the east and pick a spot that was un-named on any of our charts.  We chose it because it seemed to have less swell coming off the western tip of the Cay and we could snuggle up very close to the shore in 12 ft.  We would be well protected when the north winds began to blow. 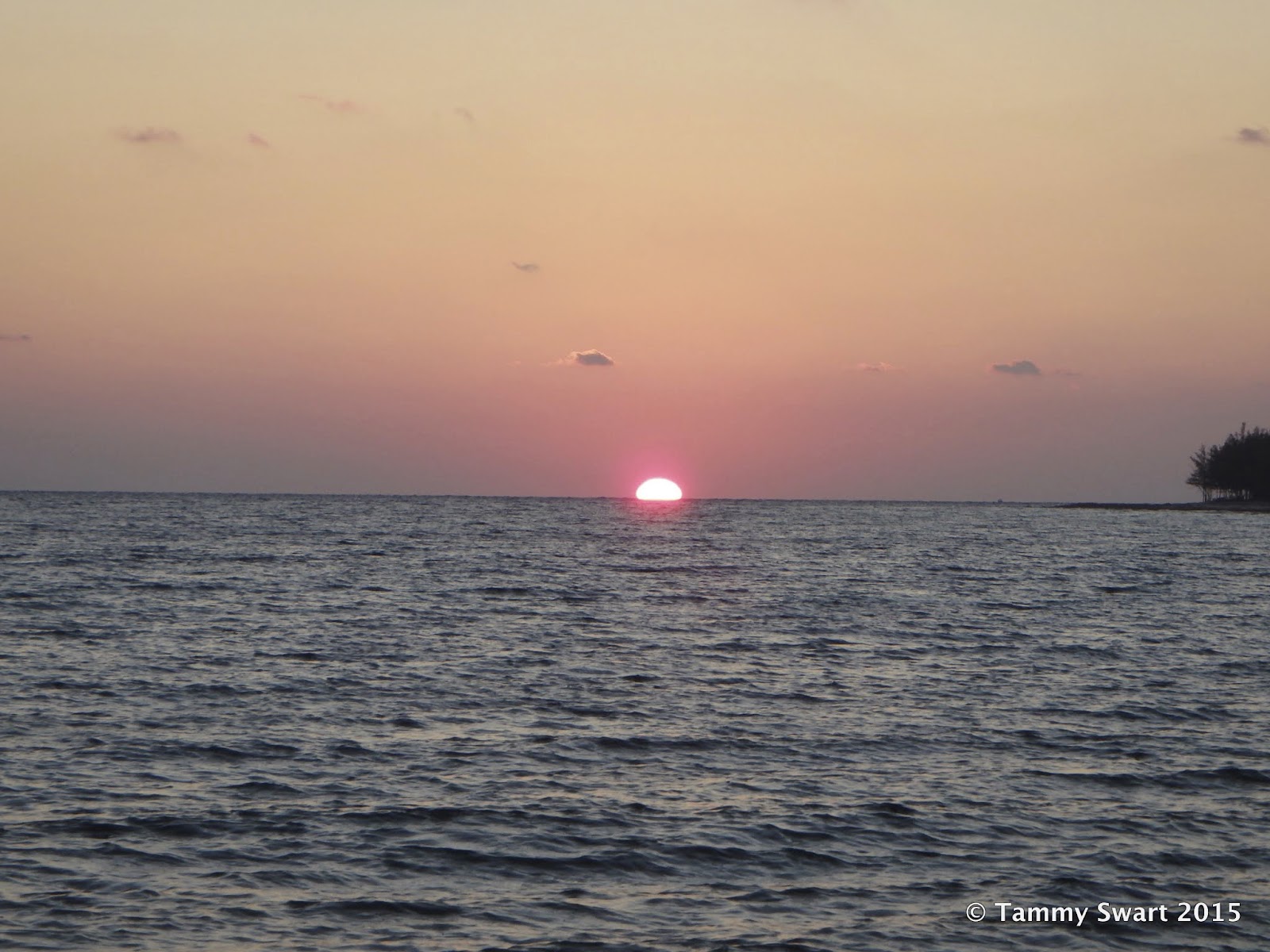 Our intrepid ways were rewarded once again with a crisp and clear sunset.  Still no green flash, but we'll be watching.  We congratulated ourselves on our success and considered ourselves quite the most charmed of sailors... We are looking forward to exploring this new place and feeling quite comfy in our Big Sailor Panties today.