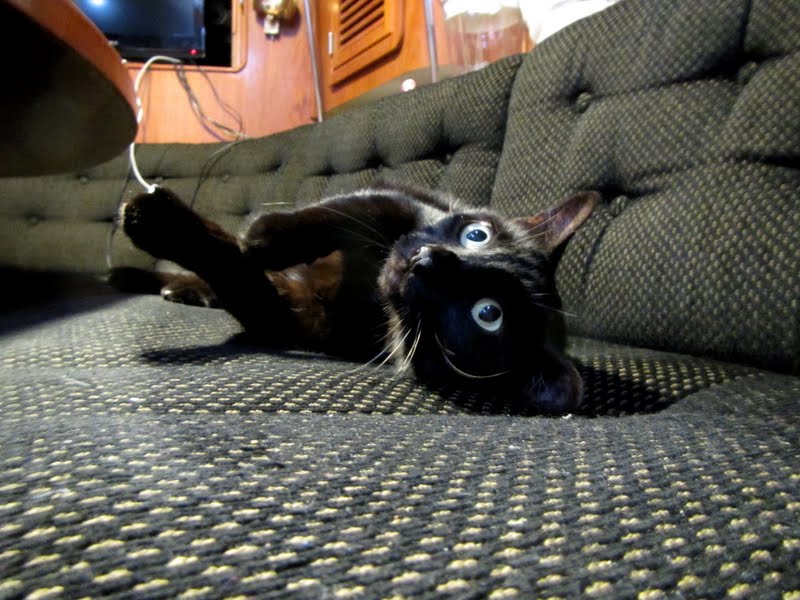 Yes, it has come to this.  I was born a poor black cat.  I have little memory of my first six months of life, but they have left me with unresolved issues that only years of self reflection and unconditional love from a couple of lowly humans, have recently begun to unravel.
I had little hope of finding a home, and that was fine with me... until one day.  I was snatched up from my cage and put on display.  It was a degrading audition.  Why should I have to prove anything to a human about my self worth?  I did my best Psycho act but it was no use... they took me anyway.

I held myself apart from them for many months, but was finally forced to relent.  They were in possession of the one thing I lacked... Thumbs!  Yes, this is what lifts them to the status they enjoy in this life.  If only Cats had thumbs... we would rule the world.

I eventually became resigned to this life where I further debased myself by accepting not only shelter, but food and drink from these people.  It made me feel better that they had no idea that I was eating off the counters and drinking from the toilets when they weren't looking.  Oh, sure, they caught me red-handed a couple of times, but I played dumb and they believed that it was the first time... every time!  They really aren't very smart.

The years rolled on and we moved from a small apartment to a small home, and finally to a sprawling two story place that was just made for me.  I loved spending hours staring out of my upstairs bedroom window at the birds in the branches just outside.  I would speed around the upstairs rooms and then zip down the stairs to the kitchen for a bit of a snack.  Then back upstairs I would go for a nap.  The humans left me alone for the most part.

Most days the man would come home smelling funny and the woman... well she just came home yaking about something that had irritated her that day.  Now and then I would give them a thrill and purr a bit... usually when they made it to bed on time.  But I didn't want them to get cocky so I would usually wait until they were asleep then climb up into my bed with them and wait for breakfast time.

Then one day, I was stuffed into the box that leads to the lady with the bottom stick.  I was none too happy about it as you can imagine.  But this time, there was no lady.  The rest is a bit of a blur... I was taken, still in the box, across some water on a board.  The smells were completely foreign to me... where were they taking me?  I was beginning to get freaked out!  There were big white things with sticks jutting out  from the top all lined up and my man took me onto one of them.  Then we went down into a dark place that smelled just like the man's clothes do when he comes home every day. 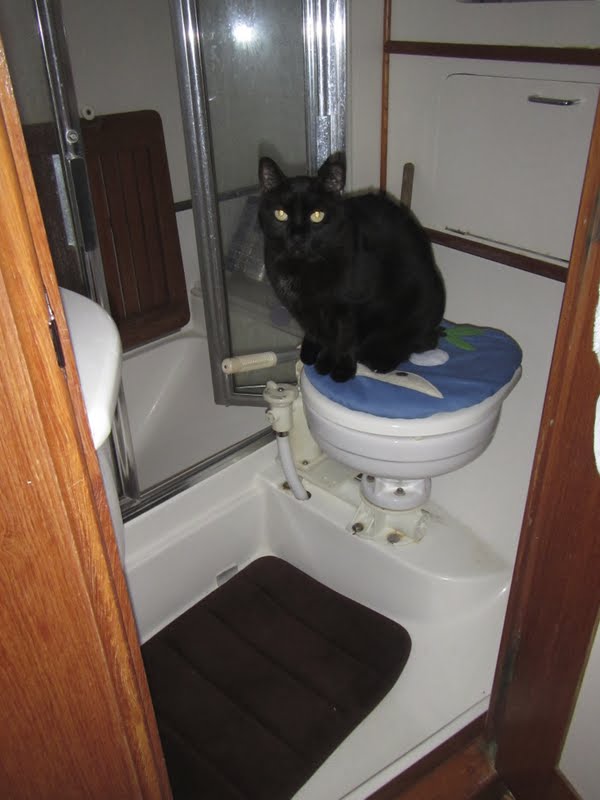 The people brought a whole bunch of stuff from home and stacked it all around.  They seemed very pleased with themselves and expected me to feel the same.  Tough chance of that!  I wanted to go HOME!  I wanted my window seat.  I wanted my cat box.  Wait... the cat box is here!  What does this mean?  Surely we aren't staying HERE!  It's so small!  There are no picture windows for me to sit in.  And you call that ladder thingy some kind of excuse for stairs?
This can't be happening to me.  After all I've been through.  You know... maybe I've been to hasty in my judgement of you guys.  I'll be nicer.  I'll sit on your lap.  I can change!  I've gotta get outta here!  I dashed up the ladder and out of the screened porch.... WHAT!  That's WATER!  OMG I feel woozie. 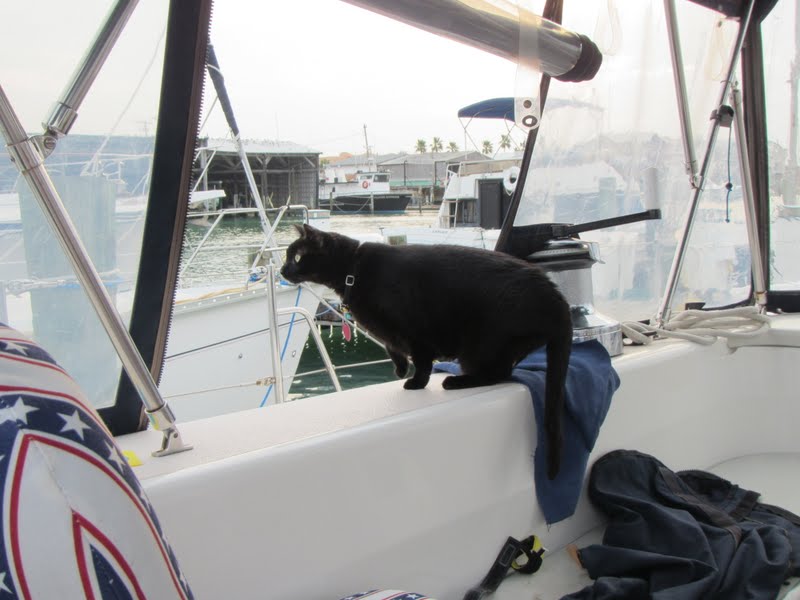 That was more than two months ago... It seems like a lifetime.  Things were messed up for a while.  I didn't know where to sit or why there were so many unexplainable noises, like giant squirrels on the roof.  Sometimes the whole house feels funny and I'm pulled towards one side or the other when I try to walk.  I tried being in a funk and got away with it for a while.  But I got over it when I realized that I still get breakfast every morning.  I still have my cat box and my people seem to have taken up sleeping on that bed in the back room.  Even though it's kind of small, I guess I can sleep there too. 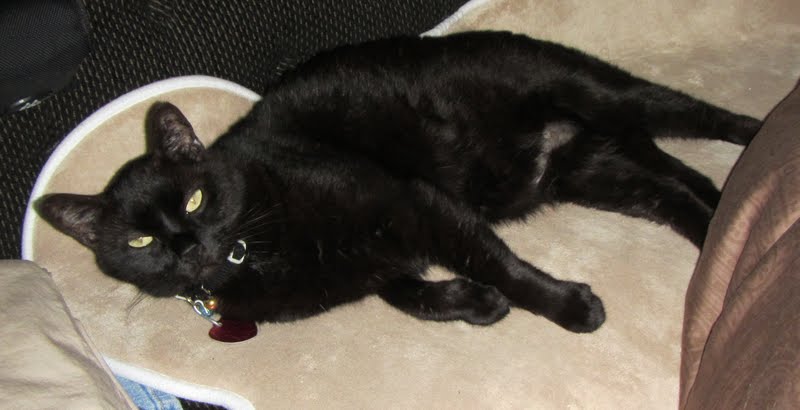 If I were to be totally honest with you, I'm beginning to think it's not so bad.  The woman still disappears for long stretches, but the man is home most of the time.  It's kind of nice to have him around, especially since he protects me from Jezabelle, who thinks she's Queen of the Evil Empire.  She can't touch me when the man is around. 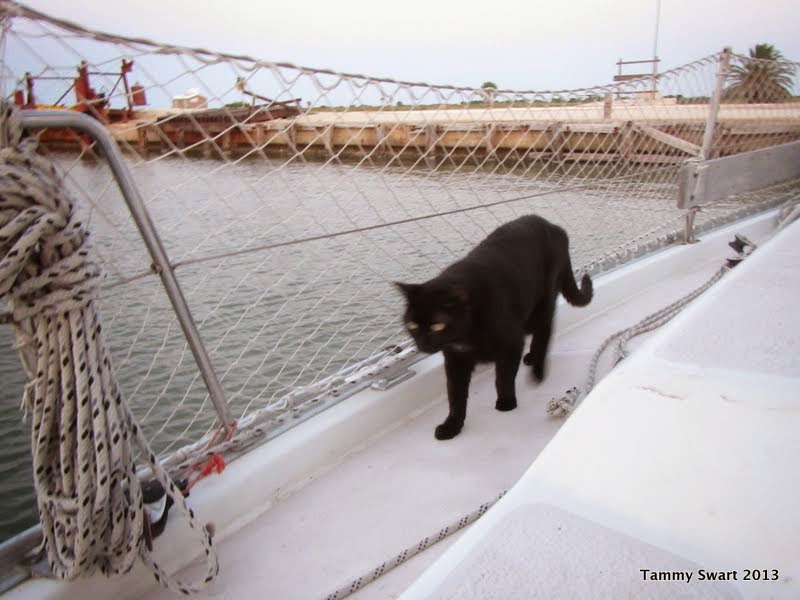 It's also nice that I get to go outside.  This was a dream of mine... like some distant memory from a time before this life.  The humans NEVER let me go outside at the other places.  I thought it was a trick at first.  They just left the door open.  They didn't lunge at me when I tried to make a break for it.  They even seemed to encourage me to go out.  I'm not completely sure that I'm not being set up for some big joke, but it is really cool to go outside and sit in the sun.  I even get to go out at night and walk around.  I love checking things out in the dark, hiding in stealth mode.  It makes my blood sing! 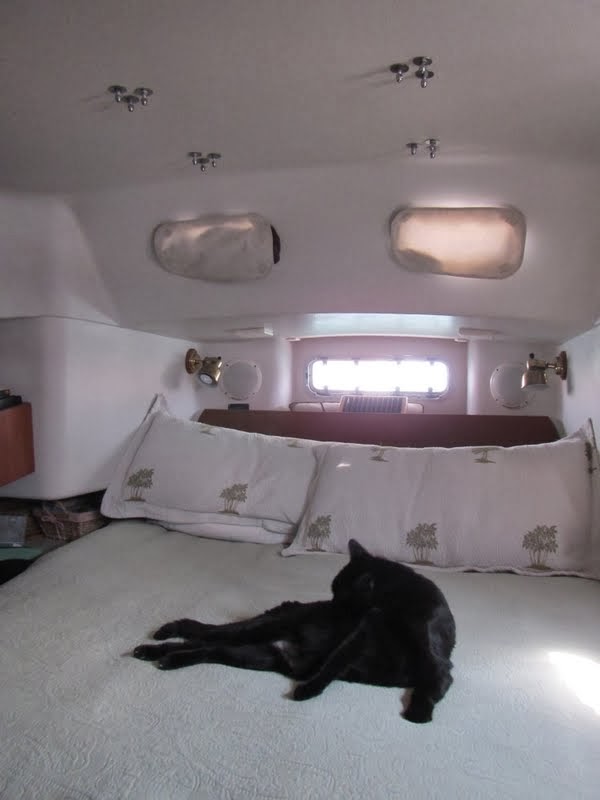 THIS is the life I was born to live!  I have the best of both worlds.  I have my freedom and my nice cushy life too.  I think my cat box is even cleaned out more regularly than before... so I can be dainty.  I fee the chains of oppression falling from my shoulders.  Yes, my name is Jetsam, and I'm PROUD to be a Boat Cat.
Click on the monkey's fist to read others bloggers on this topic.