Our plans for knocking this job out were dashed by a rampant stomach bug that took Bruce down for a solid two days.  He wasn't able to even consider going back out to House of Boats until the following weekend.

We arrived there mid-day on Saturday feeling disorganized and scattered.  Bruce and I bounced from one job to another.  Each time we began work on a particular project, we found that we either had unanswered questions or lacked some vital tool or supply to do the job.  I became very discouraged… neither of us felt very good and the job seemed to grow before our eyes.


I worked for a while on removing the scum left on the bottom where the straps had been but it seemed as if I was going nowhere fast.  The good news was that our bottom was in pretty good shape.  No blisters at all, just a few spots that had no paint that needed to be fared and filled.

The truth of the matter is that we don't have the appropriate tools to do this job in a reasonable amount of time.  Something has gotta change…  We packed it in early and returned home thinking we would attack it again in the morning…

Things weren't going any better on Sunday.  There were some questions about doing the bottom and the gel coat that we needed answered.  Bruce and I had a moment of truth.  We were going to have to not only consult the experts, but enlist their help if we were ever going to get this boat back into the water.

Ricky to the rescue!  He wheeled his cart over while we stowed away our supplies amidst promises of having the bottom sanded within the hour.  A miracle!  We walked around the boat with Rick showing him the problem spots.  He waved them away saying he would take care of all of them.

He brought out a bottle of Aluminum Bright and gave me a little taste of what this magic elixir could do to the ICW beard.  I was blown away!  We have spent countless hours and dollars on stuff to try to get the brown shadow off our hull.  This stuff made it a memory nearly instantly!

We left the boat congratulating ourselves on our sound decision to let the experts do this job before it got really ugly!

I got a call from Bruce on Monday which relieved me of my fears.  Rick was worth every cent we paid him and more.

Not only had he done everything promised, but everything Bruce started working on, Rick swooped in with either advice, help, tools or just took over and did the job himself.  This guy is unbelievable. 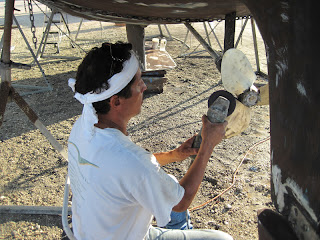 They got the entire hull cleaned and the Max Prop polished. 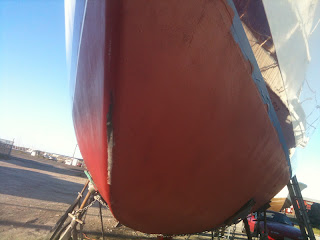 Tuesday, Bruce got the first coat of paint on the bottom.  He used up two gallons and called me to order another.  This brings us to five gallons.  Bruce also repacked the stuffing box on the prop shaft… a job that can be done while the boat is in the water, but thankfully it wasn't... The packing material he found on the boat was not the right stuff…  It wouldn't have been pretty. 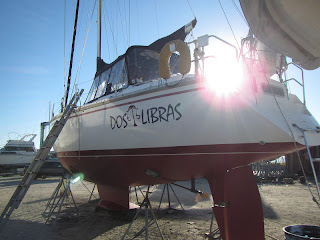 Wednesday Bruce applied a second coat of paint.  It went much easier and he used a smaller nap roller which used less paint.  Those of you who are unfamiliar with bottom paint may be wondering why I dwell on the amount of paint being used... the reason is that bottom paint contains copper, which makes it to be expensive.  We were thrilled to find this paint for a mere $240 per gallon.  It looks SO great!

Bruce was considering replacing a stainless steel through-hull... but decided to leave it.  He was also pleased to find that the cutlass bearing didn't need replacing.  It was done at the last haul out prior to the boat going up for sale.  He figured with as many miles as they put on the engine in bringing her to Texas from Rhode Island, it would need to be replaced.  But it's in good shape so we're going to pass. 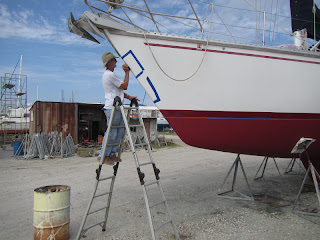 Thursday Bruce came home reluctant to discuss his day.  He worked on some minor gel-coat repairs...  Should I be afraid?  I finally got him to talk about it.  He had trouble mixing the gel-coat and the wind was a problem.  After several starts, he did make some progress and feels pretty good about the color match.

He had trouble with the zinc anode on the Max Prop and had to order one online..  It won't be here until Tuesday.  He is also having issues getting the right grease for the Max Prop.  He has that worked out now...

One thing that DID go right:  The pads got moved so that he could apply a first coat of paint to the missed spots.  We should have the final gallon of paint by Saturday so that we can get the bottom paint finished. 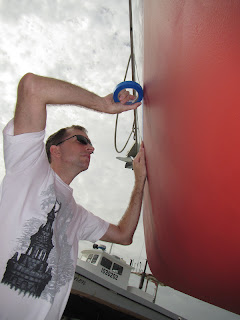 No work on Friday or Saturday.  But on Sunday... we had some help.  Michael was visiting us and offered to lend a hand.  We found his height to be quite the advantage in taping the borders for the third coat of bottom paint along the waterline where it gets the most wear.  Michael taped the whole boat in no time!  Thanks Michael! 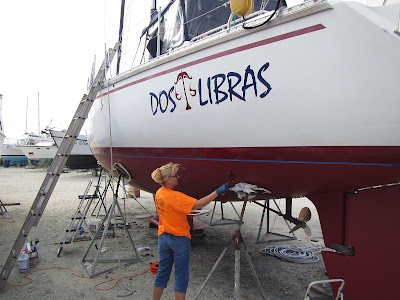 I finished the painting while Michael helped Bruce with the gel coat repairs. When I was done, there were two coats on everything (three on the waterline), except for the prop and the bottom of the keel.

Now I have been having nightmares about the keel.  Bruce said he usually ends up scraping barnacles off the keel since there are thin spots where it rests upon the blocks and can't be painted.  The keel gets painted quickly when the boat is in the sling before it goes into the water but the paint wears off quickly. All of our previous boats have had fin keels... Dos Libras has a broad flat wing keel with lots of real estate on the bottom.

I'm thinking that if I can get a couple of coats on, at least where there are no blocks, Bruce won't have to spend as much time scraping barnacles.  Ricky mixed us up a batch of epoxy primer which will improve the chances that the paint will stick to the lead keel.  Since I'm the one worried about it... Bruce allowed me the honor of shuffling around in the dust in 28 knot winds to prime the bottom for painting.

I was done when I ran out of primer and it was none too soon.  I was covered in dirt and could hardly see from the grit in my eyes.  This wind has gotta GO! 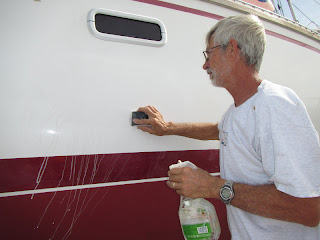 Bruce spent our remaining time doing some wet sanding on the gel coat.  He used 1000 grit on some of the minor smudges and will finish it off with 1500 grit. Its amazing that it does anything at all.  It's as soft as a baby's butt!  We had to call it a day and go back to town.  We are getting close but unless the weather forecast is mistaken, we won't be back out on Monday.  High winds are expected with a drop in temperature that will make our work difficult.  We plan to get back at it on Tuesday with hopes of a Wednesday splash! 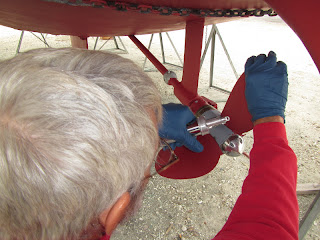 Tuesday came and went without completion.  I finished painting the bottom of the keel and the prop.  Bruce got the Max Prop greased and WOW! It really needed it.  We had been having trouble getting the prop to feather, now we know why.  When he was done, the prop blades rotated MUCH more easily.  I finished wet-sanding the gel coat repairs Bruce had made.  I will say they aren't very professional looking and could have used another fill coat, but at this point, we're ready to accept it like it is.  Maybe we'll take another stab at it once I quit my job and time is on our side.  It began to rain at this point.  We tried to be grateful to have finished what we did...  Our hopes of splashing on Wednesday dashed... we drove home in the rain to work on the yard sale.  Maybe we'll get it back into the water on Thursday... we're running out of time!

Wednesday was the day to finish the hull.  All we needed to do was wax.  Bruce put me to work applying the wax while he prepared the buffer.  He underestimated my speed and I was about 1/3 way down the starboard side when he got to it.  I was appalled at the way it looked but didn't want to say anything.  It wasn't until Jeff (another male) came by to chat and mentioned that it looked kind of blotchy.  We realized at that point that we had allowed the wax to dry too long and we were in deep trouble.  In despair, I went in search of Ricky to rescue us again.

He came over and advised us.  It turned out that we already had some of the stuff he recommended.  He even lent us his variable speed buffer (ours was single speed).  He showed us how he does it and pretty much redid that 1/3 of the boat we botched.  Then he turned us loose on our own again, happy once more. 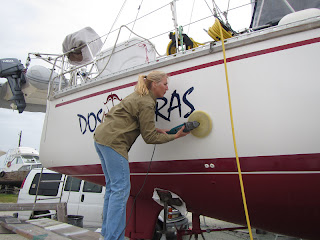 Ricky made it look so easy... but Bruce and I were quite a bit slower at it and we took turns, each doing a stretch until our arms got tired.  And our arms DID get tired.  We worked our way down the Starboard side and started on the Port side.  The day progressed and we were hopeful that we could get it finished.  We moved scaffolding and climbed and polished until I could hardly move my arms. 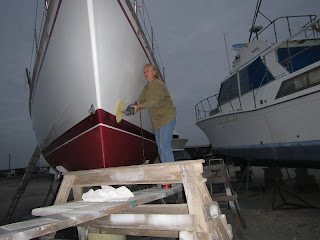 We weren't going to make it... the decreasing light made it impossible for us to see where we had polished and we knew we weren't doing very well.  We called it quits when we were literally three feet from the nose.  We drove home trying not to be too disappointed that we hadn't finished. 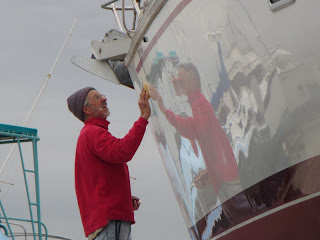 We planned to arrive early enough in the morning to finish the last bit of hull before the scheduled splash.  We were on the agenda for first thing in the morning.  We got it done and were happy with the results.  The boat looked great!  The guys loaded her onto the lift and painted the underside of the keel where the blocks had been and we were just about to go into the water when I noticed a crack where the keel joins the hull. 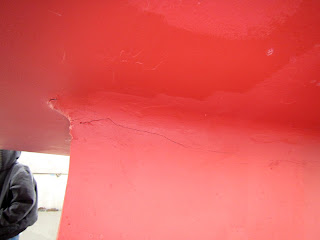 We consulted Ricky again... he said that he could grind it out and fill it in with Cabosil, promising that we would never have to fix it again.  It would delay us another day, but he could get it done and painted while hanging in the slings.  DO IT!  The LAST think I want to worry about is my keel!

Home we went again to work on the yard sale... Back to the boatyard on Friday morning fearing that even hoping to get the boat into the water would mess things up.  Not to worry...  We were pleased with the repair on the hull, the boat was lowered into the water, the through hulls and stuffing box checked for leaks...  All good!  We paid our yard bill (much lower than we thought it would be) and motored out into the ICW. 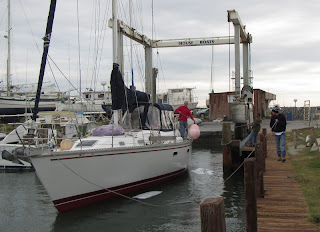 Being back on the boat seemed almost strange.  It took me a while to get the trust back.  I asked Bruce to check the stuffing box at least twice before I settled down and enjoyed the fact that we were finally free again!  Boatyard days have come to an end for (hopefully) quite a while!