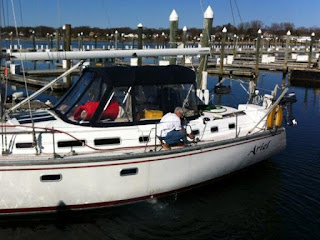 Day 1 -  Bruce and Chuck left Greenwich Bay Marina, home to Dos Libras since we purchased her.  They had planned to fuel up and sail to Block Island for a night, but changed plans and headed straight offshore... destination - Norfolk, VA. and the Chesapeake Bay.


I had a brief text and phone call from Bruce as the neared Block Island to let me know of their plans to skip it. 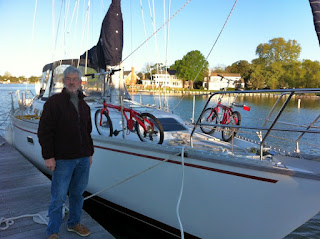 Day 4 - The next contact we had was when they were 88 nm from the entrance to the Chesapeake Bay with current against them. They had a storm in the forecast and were trying to make it in before it hit. Chip had put them in contact with a woman named Joan, who is a member of the SSCA.  She had a slip prepared to accept Dos Libras complete with a -buy one night get one free - plus an additional free night courtesy of their organization.  Once they got the boat tied up for the night at the Hampton Marina, the guys collapsed in relief and exhaustion from their gruelling three and a half day shake down cruise. 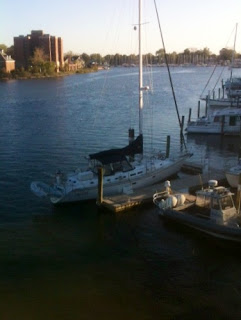 Days 5 & 6 - Bruce and Chuck spent all day Thursday and Friday avoiding the rain, recuperating, getting the dinghy up and running, doing some repairs and provisioning for the next leg of their journey.  They had dinner with Joan and her husband on Thursday night and she would take no kind of repayment for her help.  She brought Chip's SPOT (which he had shipped to her) so that we at home could follow along on the rest of the journey.  Thanks again Chip! 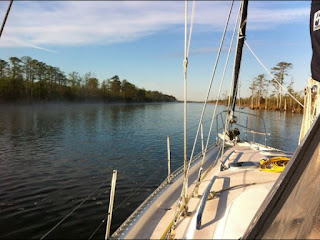 Day 7 -  The boat left early in the morning on Saturday headed for the ICW, next stop Coinjock, NC.  They spent the 12 hour day motoring in the mucky mud-colored waters that Bruce said made our Laguna Madre look like the Caribbean.  I guess we'll have the "ICW Beard" by the time they reach home...  Bruce was nervous about the bridges.  He had purchased the famed Skipper Bob cruising guide but, unfortunately, got the Marina guide instead of the ICW guide.  What he needed was the information about the multitude of bridges that they would pass through.  I got online here at home and found them the information they needed on the Blue Seas Website.  This had all the information he needed to prepare him for his first experience with bridges and locks.  After this day, he felt like he had really become a Cruiser.  He was gaining knowledge and confidence and I was so jealous!  But, I was also glad to see him get this.  This experience is taking the "fear of the unknown" out of going cruising for us.


They spent the day rushing against the current to arrive in time for the opening of the bridges, waiting for them to open once they arrived and then scurrying onward to the next one trying to make the schedule.  Bruce learned how to get the boat to hold position in currents going both with and against the boat.  Again, a fabulous learning opportunity and I'm jealous!  But it's good that he got to do it, since I would probably have been at the wheel had I been there... 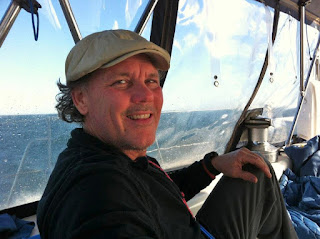 The guys were headed for what they were told would be an old marina that was no longer in business but where boats could tie up overnight for free.  When they arrived, they discovered that the information they had received was outdated.  There was now a working marina where they could tie up with water and electricity for $90 per night!  Well, it was not so bad, they got free wi-fi so that they could surf the Internet and check out Passage Weather, a site that Chip advised me about.  (why did we not know about this before?).  They spent the evening relaxing after a long stressful day.
Day 8 - Sunday, April 8 Under way early again, the guys crossed Albermarle Sound and headed for the Alligator River.  They had little or no cell phone reception and planned to anchor out for the night.  I have no details about that day, only that they anchored in this SPOT near 5 or 6 other boats of many different types.  They didn't make contact with the others, just had dinner and a couple of beers and slept. 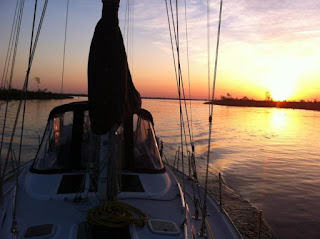 Day 9 - Monday, April 9  I got a text from Bruce late in the day telling me that they had been having a nice day, not much sailing, mostly motoring.  At about 4pm the winds cranked up to 18kts on the nose so they were motoring in a large bay punching through 3-4 ft waves doing just over 3kts.  He wasn't very happy about it.  Finally they neared the end of this day's journey and anchored near the opening to the ICW where narrows and crosses through some farmlands.  They were all set for the next day.  I spoke to Bruce briefly on the phone but didn't get many details.  They had made 75 miles that day and were pretty tired. They just pulled over once the ICW narrowed a bit and picked a SPOT to anchor for the second night out.  It was all starting to run together.  Time for dinner and a beer.  They were not far from Beaufort, NC where they planned to spend the next day. 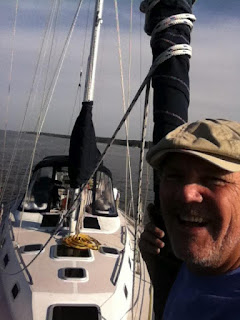 Day 10 - Tuesday, April 10  After an early start, Dos Libras arrived at their slip in Beaufort.  It was a short motor from the anchorage where they spent last night and their new crew members were waiting.  We welcome Steve and George! 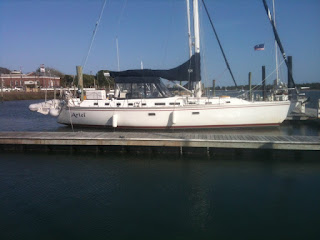 I got a call from Bruce and felt much better about life.  After spending a very nervous day thinking they were going out at Beaufort which would mean that they would sail through the Frying Pan Shoals off Cape Fear, I found that they revised their plan.  They will continue on in the ICW for another hundred miles or so past Cape fear and will then come out into the Atlantic with what looks like a very favorable forecast.


The guys spent their day provisioning and preparing the boat for the next leg of the trip.  Bruce worked on cleaning the seals on the windows and moistening them with Vaseline.  Hopefully this will keep things dry when they take a wave over the top. 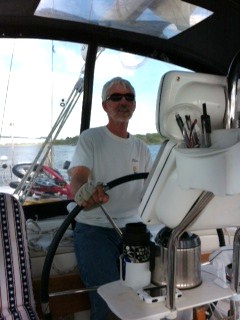 Day 11 - Bruce called from the anchorage after making 65 or 70 miles today in the ICW.  He was pleased to say that they motor sailed most of the day.  This was the first day he actually got to use the mainsail and he was very happy with how easy it was to raise and drop the sail.  He is still very happy with our choice.  He did say that it will take some adjustment for us as Elan didn’t slide much, I guess due to the deeper draft, but Bruce noticed a definite difference in Dos Libras.  He also said that it was not really possible to  steer from the low side because of the smaller wheel.  Oh and one more thing, (OK, Chip… take your told-ya-so…) sitting behind the wheel, he noticed decreased forward line of sight.  But!... he did say that you could see more all around…  So, there are trade-offs, but we knew that going in.

The route today required near constant attention of three crew members, one on lookout, one on the map and the third on the wheel.  Navigation through the narrow ICW was more demanding of them than any of the other days and they’re all ready to get offshore and stretch their legs a bit.  For now, the guys are preparing dinner in an anchorage with hopes of making it to the coast south of Cape Fear and breaking out into the Atlantic by around noon tomorrow.
They think the weather looks favorable with decreasing winds on Friday.  Saturday looks to have the winds shifting around to the South which has them thinking they’ll come back into the ICW.  They’re hoping to make around 300 miles with 2 days of favorable winds. 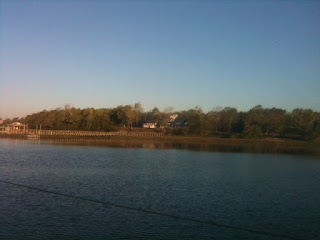 Day 12 -  Dos Libras pulled up anchor at 6 am local time.  They rejoined the ICW for this last bit with plans to go offshore later today. I sent Bruce a text advising him to check in with Chip before going offshore to update their current plans.  Bruce called me and we talked.  I reminded him that Chip was taking his role of Emergency Contact very seriously.

I realized this morning that I have been thinking of little else since their departure from Rhode Island.  I have created a place in my mind to live along with him constructed of the the little tidbits of information he has given me, photos sent and the pictures of their locations from the SPOT and Google Earth.  In this place I am right there with him.  He fleshed it out a bit for me... describing the grace and luxury of the manicured lawns and old homes lining the ICW at this point.

Meals are good, (Bruce isn't cooking)  Provisioning checked off, even the laundry has been done.  Unfortunate casualties include the loss of our Flamingo bed sheets...  Evidently they took too long in the dryer so the guys went to dinner while they waited.  After a beer or two, they walked right past the laundry building on their way to the boat.  No further thought was given until bedtime many miles away.  Bruce considered calling the place but didn't want to admit to ownership of Flamingo sheets. Well, I can't complain to much.  I'm proud that they did laundry at all!

He also fleshed my mental world out with a veiled reference to a clogged holding tank vent but stopped short of the final description and exact details of how they figured this out...  For now, I'll live with that scene unfinished in my mind's world.

Today, they leave the ICW.  Weather report is good.  Temperatures in the 30s overnight and I'm hoping that they arrive here in "Spring" on this next leg and can pack away the winter clothes.  I've got SPOT to keep me company and it helps to know that Bubs is out there rooting for them along with me.
http://www.findmespot.com/mylocation/?id=7ZZgK/34.32225N/77.71866W