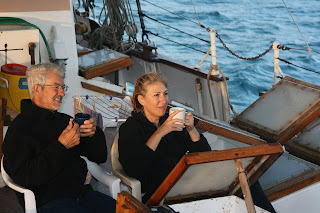 Did I mention we had some wind this week?  Well we did... and if ever there would be a day for mutiny, this would be it.  Don't get me wrong... you pay your money, you take your chances with weather.  But it would have been nice to take some of these clothes off and get into the water.  Coffee on the deck again today. 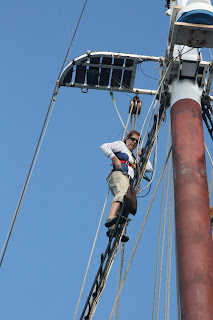 We may be on vacation but the Crew isn't.  They still have their chores and a ship to run.  Maintenance projects can be entertaining to those of us who can hang about and watch and ask stupid questions like "What's a Baggy Wrinkle?".  Evidently the winds have beat these to death so some attention was needed... way up there!  Glad they didn't call for volunteers for this one. 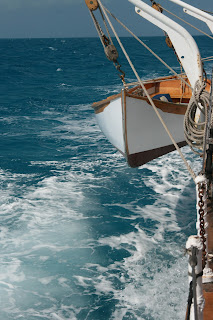 We got underway just after breakfast.  The winds forecast for tomorrow had arrived early and were really blowing.  Once again the Skipper had to adjust his plans for us.  Even coming from Corpus Christi where high winds are common, I was nervous about raising sails in these conditions.  I had visions of the rail in the water and people sliding all over the deck.  But the Crew had the ship trimmed out just right in no time and we had a sleigh ride seeing over 10 knots through the incredibly blue and remarkably flat waters. 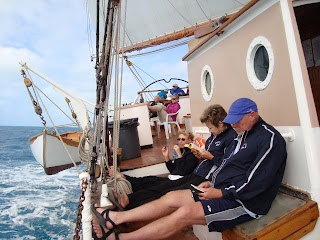 While the Crew did their chores, the passengers found places to hunker down out of the wind.  The Foredeck was out of the question as even though the seas were not choppy, there was a considerable amount of spray.  The Spences and I found a nice spot on the stair outside the Galley.  We got a lot of reading done.  The only fault to be found was the tortuously wonderful smells coming out of the window.  Something with cinnamon... 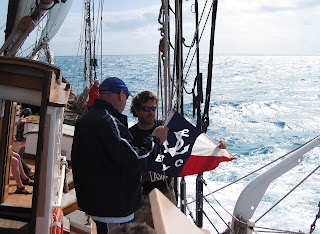 Chip had asked earlier if we could fly our BYC burgee for a little while and had been given the go ahead.  Now seemed like as good a time as any as we sailed back through Current Cut on our way to our next destination. 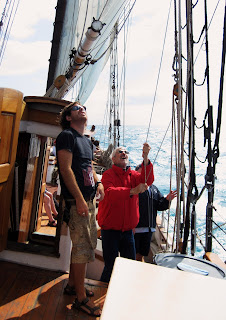 Chip got it all lined out then decided that it would be apropos for a Club Officer to do the raising.  Bruce was called for the job and up it went.  He's not one for the photo op so this is all I got.  Oh well, you get the drift... 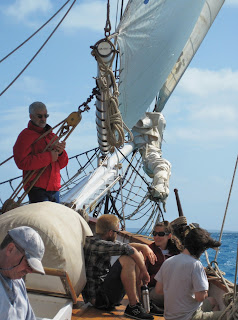 Well that entertainment didn't last long so it was back to hanging out watching the Crew work.  The spray on the foredeck had diminished  and some of the Crew were working on scraping the old varnish off the wood rails.  Bruce went up there to see how it was done as we grew near the end of today's sail. 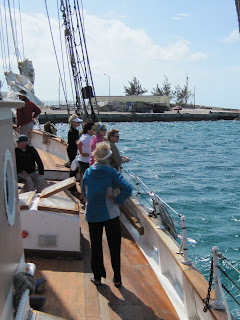 We dropped sails and entered the protected cove of Governors Harbor and motored around while the Skipper formulated a plan for docking.  The winds today, tomorrow, and the expected arrival of a container ship had to be taken into account when picking the right spot. 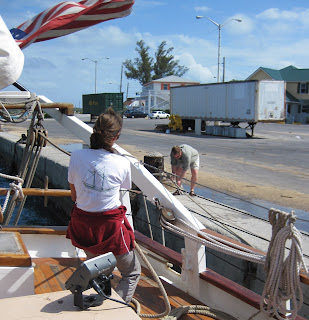 The Crew worked feverishly.  Our job as passengers was to stay back and try not to get crushed between the Ship and the dock as the ferocious winds pushed us hard against it.  We were happy to comply as we looked around eagerly at this quaint little town. 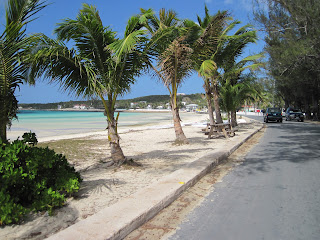 In no time we had been given our orders to be back aboard the ship by 10 am the following day.  We all prepared for hiking and set out through the town. 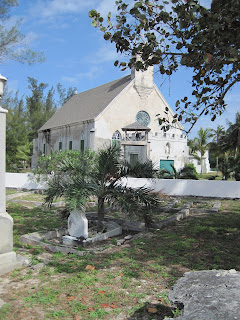 This is what I love about the Islands of the Caribbean.  The fact that everything is old and quaint to us, but this is life for the people who live here.  This is their church... Where they congregate every Sunday.  They get married here, they're buried here in the Churchyard... 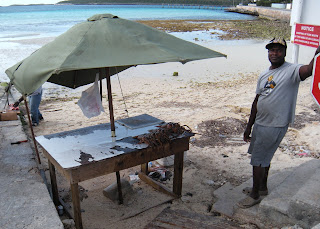 They're industrious. (Sort of)  This guy's JOB is to go out and dive for some lobsters, then sit around and wait for someone to come along and buy them...  When I go back home to my crazy stressful job in CC, this guy will still be standing here in this beautiful place trying to sell a lobster. 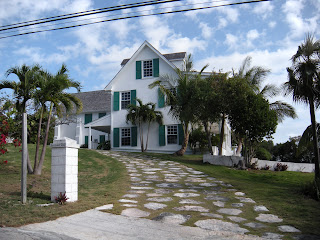 Our plan for the day was to hike though the town, over the top to the other side where we were promised the wonders of a pink sand beach.  We had no idea how to find it but figured there couldn't be too many ways to get there.  We headed off up the main road past homes with lush tropical gardens surrounding them. 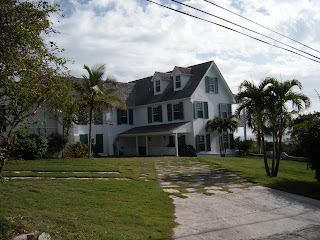 We marvelled at the size of the homes.  When you think of Island life, you think of small cottages or shacks.  These are some really nice estates. Who lives here?... we wondered. 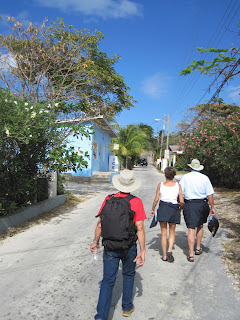 We found a little gift shop that was open for business about half way up the hill.  We all stopped but our group moved on, leaving Bruce and I behind.  We (I) shopped until I dropped... about $200 bucks on souvenirs, then we hurried to try to catch up. 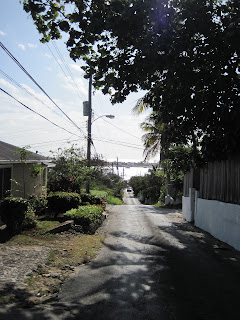 Looking back the way we had come, we found the long sloping road ending in the sparkling little cove where our ship lay waiting. 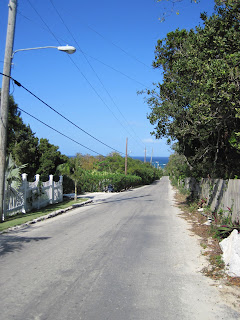 Upon reaching the summit, we could see the long downhill road ahead of us, ending in the blue waters of the Atlantic Ocean. 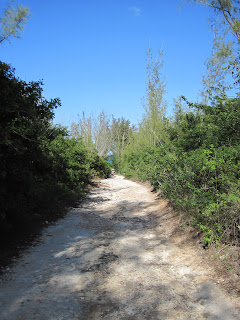 We came to a "T" in the road and still hadn't found our friends.  We looked left and looked right... no sign of them, or anyone else.  I looked for footprints in the sand and it seemed like the left hand road was more well travelled.  We had no coin to flip so the footprints were the deciding factor. 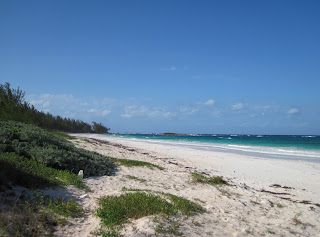 Just when we began to get nervous that we had chosen poorly, we found a footpath which brought us to our destination.  The promised pink sand beach.  It was a wild, windy, desolate looking place.  There had once been a resort here but it was no longer in business.  The empty facility gave it a strange feeling.  I almost felt guilty that we were here enjoying this beach all alone. 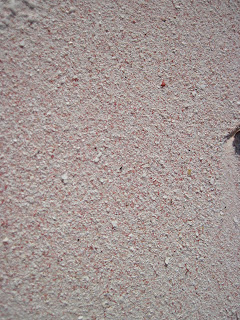 I don't know exactly what you were expecting of a pink sand beach, but this is it.  It's made pink by tiny microscopic shelled animals mixed in with the normal white coral you see on beaches all over the Caribbean.  It's more pinkish in certain light and when it gets wet. 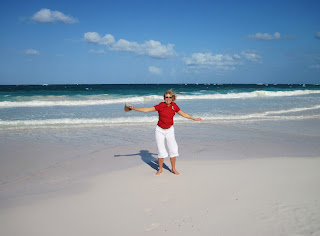 We fooled around a bit trying to get the ever elusive "jumping" picture.  It's much harder than you would think with a digital camera. 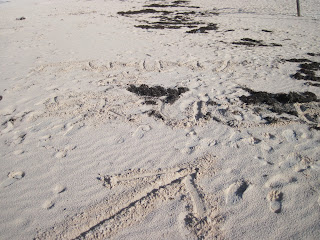 We could see a group of people far up the beach to our right and believed that they were our group.  We began our power walk towards them.  I guess they had gone right instead of left.  We began to worry when we saw them leave the beach, that we wouldn't find them, but Chip took care of that.  He and Brenda left us a message in the sand pointing the way. 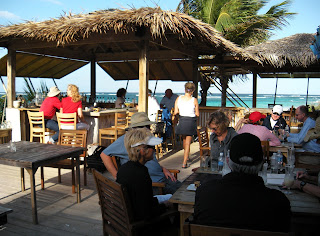 We took a lush garden path right up into an oasis.  We went from being alone on a beach to being in the midst of a large group of our shipmates and a few other patrons on a patio/beach bar right out of a movie. 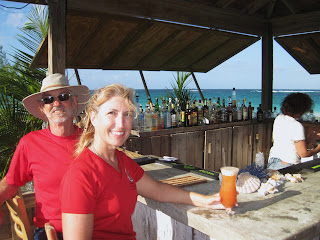 In no time we had libations and were enjoying appetizers with the best view on the planet.  I found myself feeling a bit of jealousy towards the woman working the bar.  This is her JOB!  I struggle to make my work environment more pleasing by listening to music and seeing glimpses of beach when my screen saver kicks in... this woman has the sounds and the sight of this incredible place every work day. 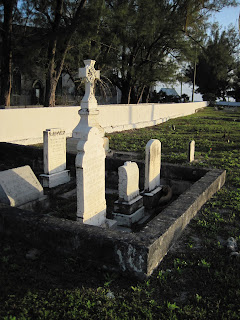 We enjoyed our eats and drinks until the sun began to get low.  It was time to head back to the ship or get a room, we opted for the ship.  Once again drawn to the main saloon by the lure of Chris' home cooking.  We took the much shorter path back to the main road over the island.  The view this time was much more dramatic in the waning light. 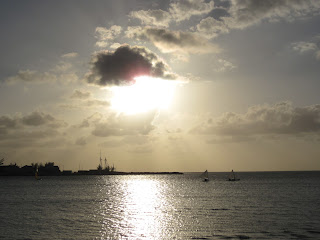 Our little bay had turned to a sparkling jewel dotted by sunfish sailors just finishing a race.  The picture just can't do it justice. 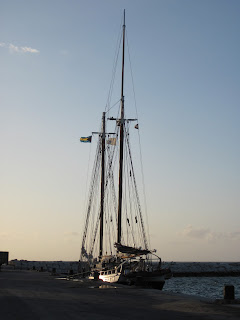 We made our way along the water's edge to our home away from home. 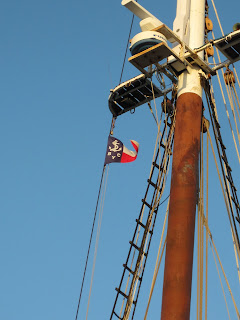 Our BYC Burgee was still proudly flying as we boarded and settled in for the evening.