Egg Island - Just Another Day at the Beach 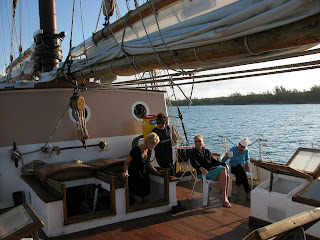 The mornings were beginning to all look alike.  We would wake up early and creep up onto the deck quietly so as not to wake up our shipmates.  We would find coffee in the main saloon and take the steaming cups laced with Bailey's Irish Cream to some little spot where we would gaze out at the sunrise and watch the changing sparkles on the surface of the water. 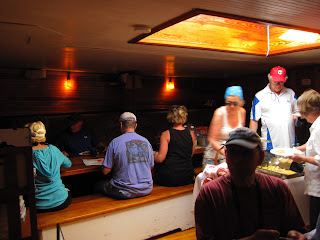 One by one, our friends would join us where we would chat about the previous day until the breakfast bell rings.  Then we clamoured down to the saloon again to see what joys Chris has bestowed upon us. 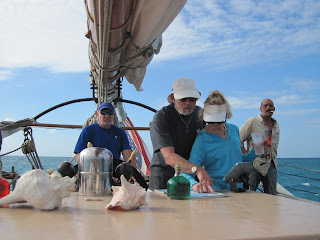 It was after breakfast that our days would become unique.  We would prepare to get underway and do our morning toilette, but then we would find out where the Skipper planned to take us.  This day, we had been told we would be snorkeling on a shipwreck.  But the high winds and strong current made that impossible.  We were a bit disappointed, but it wouldn't have been pleasant anyway.  So, exercising their local knowledge, the Skipper and Crew plotted a course for a beach nestled between Egg and Royal Islands. 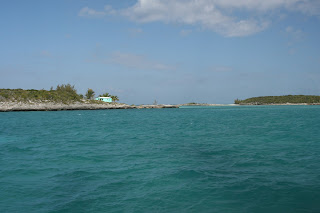 We timed our arrival at Current Cut just right and sailed right through.  None of us would have even known that we were shooting through a narrow opening in the reef had the Skipper not pointed it out to us.  We were all eager to get a glimpse of the spot they had picked out for us today and as our eyes found the spot, it opened up onto one of the most beautiful beaches we would see on this trip. 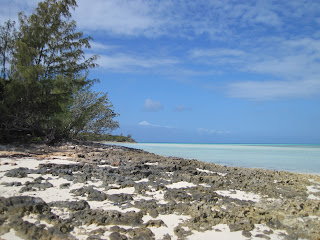 We dropped anchor and began the dinghy shuttle to shore where we found a small compound with some rustic buildings up near the jungles edge.  This little hideaway has be best view around. 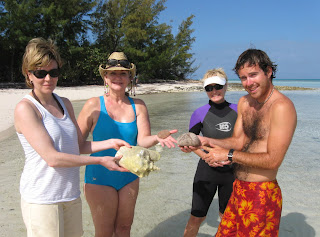 Everyone got busy exploring the tide pools where we found an abundance of sea creatures just sitting there waiting to be found. 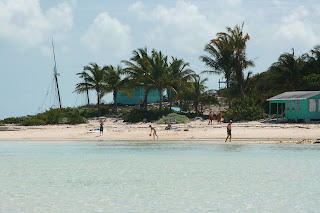 There was room for us all to wander and scatter along the shore.  Singles and couples and groups all went their separate ways to explore this place in their own way. 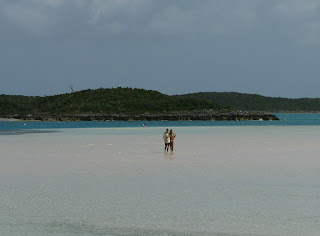 Bruce and I headed across the shallows towards the cut between Egg Island and Royal Island.  There was a steep drop signified by a change in the color of the water from the palest to the darker blue. 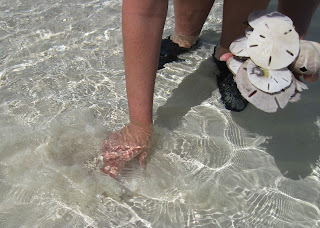 We couldn't walk five feet without finding a sea biscuit or a sand dollar.  They were everywhere.  Some dead, some alive. 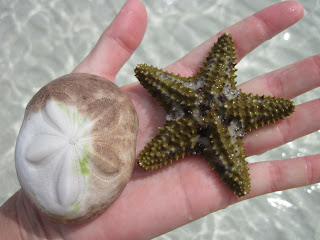 I found a couple of starfish too. A green baby cousin to the bigger orange ones we found in the Grenadines.  They were alive so I put them back where I found them and went on my way. 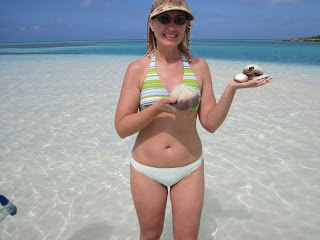 Again I wondered... could I do this every day and not grow bored.  It's for sure I wouldn't be able to bring home all the treasures I collected if we were cruisers.  You can only have so many sand dollars... 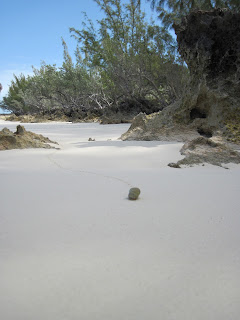 We loaded up and moved towards the shore where we meandered back to the compound area.  There were volcanic looking rocky areas scattered about the sandy shores.  We found thousands of little snails crawling about on the rocks and the sand. 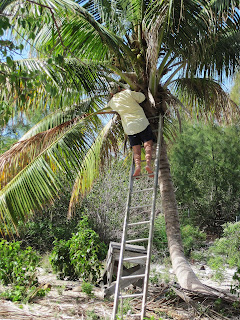 We joined our group under the shade of the palm trees lining the jungle's edge out behind a shack.  There were coconuts around everywhere.  Bruce found one and opened it up but the milk didn't taste very good.  So he decided that it was because it was fallen and he needed a fresh one.  Funny how there was a ladder laying right over there where he needed it... so he didn't have to go monkey. 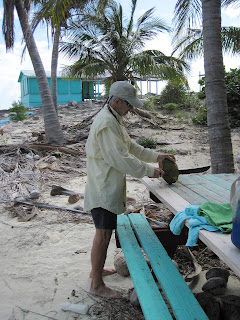 There also happened to be a machete lying around so Bruce grabbed it and went to work. He worked and worked to get the green outer husk hacked off.  Charlie and I tried to remember how we had seen it easily done in Hawaii but neither of us could come up with it. 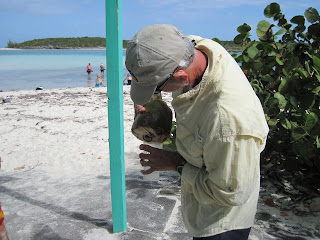 Finally Bruce sprung juice like they do at the beach bars and poured it out.  It didn't taste much better than the other one to me.  Annette liked it though so she drank it up. 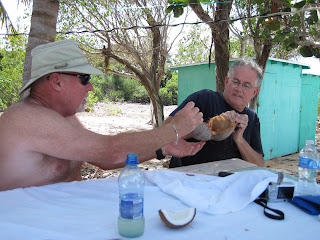 His success got the other guys fired up.  Charlie went out to get his own coconut.  He had some help from Chip to get all of the outer husk off leaving the  perfect brown nut inside. 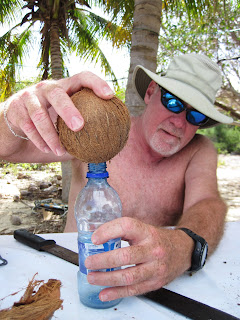 They went to work on it until they finally just poked it's little eye out and Chip poured out the milk.  Annette was ready to drink that one too.  We all began to hope she would suffer no ill effects so we stopped there... 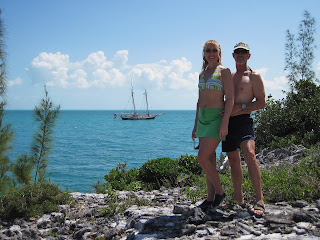 Bruce and I wandered up onto the hill to take a look at our ship anchored a ways offshore.  It was another breathtaking view.  While we were up there, we saw the dinghy setting out to come back to the island.  We hoped it was Chris with another of her prize winning meals... 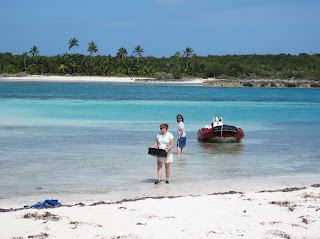 It was!  Whoopee!  She had a couple of big boxes full of an assortment of cold cut wraps and goodies for us.  We were happy.  We all descended on the boxes like hungry wolves.  We ate in the shade of the palms until we were full as ticks. (again) 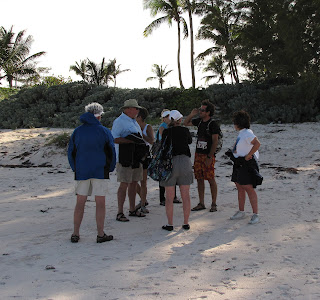 We began to get drowsy and our thoughts turned to our bunks back on the ship.  We summoned the dinghy once again to our beach to pick up a group.  I was torn... stay and sunbathe on the beach or go back and get rested and cleaned up for dinner.  The deciding factor turned out to be the fact that I had only a solitary beach towel to last me the whole week and I wasn't ready to get it sandy. 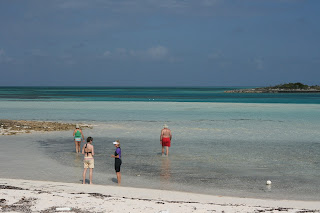 So we left half of our landing party on the beach to enjoy their afternoon in solitude and went back to the ship.  This turned out to be a good thing with so many people sharing a shower. 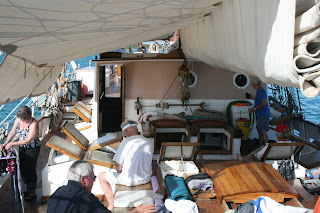 We found that the crew had put up an awsome awning over the mid-section of the ship.  We showered than found places to relax in the shade and enjoyed an endless supply of Bahama Mammas that Jen made for us.  She didn't have a recipe so they were different every time.  Kind of like having an assortment of different beverages.  It was all good but we ran out of pineapple juice and had to make due without it for the rest of the cruise.  There aren't a lot of convenience stores out here. 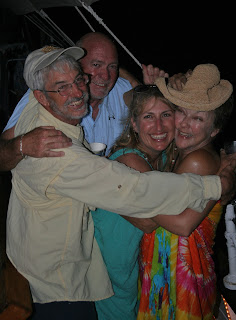 We got a head start on the rest of the passengers and as darkness fell, dinner did nothing to dampen our spirits.  We had a great time even if we did go to bed just after sundown.  Our day had been full and we needed to rest up for the surprises the next day would hold for us.