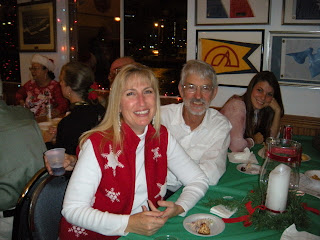 This was a weekend for Christmas Parties!  First the Office Party on Friday night, then the BYC Party on Saturday.  'Tis the Season!  We had to dress up for Friday night but Saturday night was "Christmas Casual".  The Commodore is responsible for the food and the decorations, outside of what's already up at the Club. 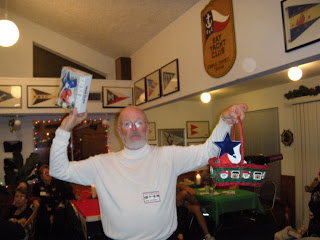 The best part was the Gift Exchange.  We shopped for days to bring what we thought would be the coveted gifts this year.  The Liquor related gifts are always the best with this crowd so we brought the BYC Texas flag themed goodies, and threw in a bottle of Pennsylvania Dutch Egg Nog to make it interesting. Jake got it and probably didn't know what he had until he got home with the Egg Nog.  It's FABULOUS! 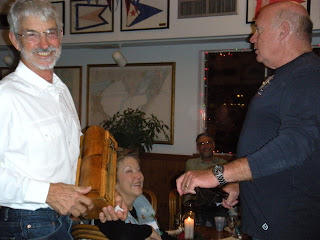 Now the game goes that when your number comes up, you can pick a fresh present from under the tree, or steal one that you already know is good from some other poor soul.  The first gift opened was a really nice bottle box with Captain Morgan's Spiced Rum inside.  Chip stole it and next up was Matt with number 3.  He traded his number to Bruce.  Bruce stole the gift from Chip, (would you try to steal from THIS GUY?) 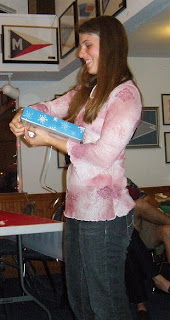 Brittney came up next and her gift was an inflatable Ice Bucket.... Nice gift for Boat People, but not so much for one who doesn't drink.  Might make a nice "re-gift" this year. 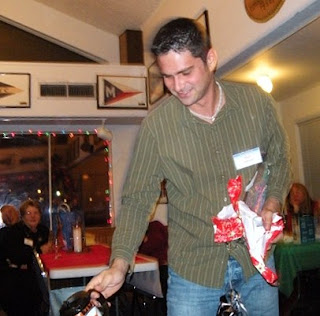 Matt Came next and he got a bottle of wine... nothing special about that, but the carrier was very cool.  It was insulated with a pocket on the outside that holds a wine bottle opener.  I thought this was a great gift and had already begun getting acquainted with it, as he told me it was going to be my Christmas Gift from him... Unfortunately, I loved it too much, thus attracting the attention of another Club member... K, who promptly took it from me (Matt), throwing him back into the game.  He chose a new gift from underneath the tree.  (He'll never make THAT mistake again)... He got a "Lovely" set of Texas Longhorn Christmas balls and a Texas Longhorn adorned Cup.  Will the Club member who thinks anyone else besides themselves is interested in the Longhorns, please cease and desist their attempts to spread that propaganda at our Annual Christmas Parties!?! 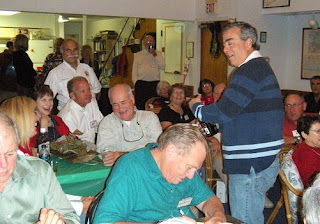 The Game went on with howling and hooting!  This bunch is RUTHLESS when it comes to the stealing of gifts.  There were several bottles of Bailey's and other popular libations that were stolen again and again.  It got so confusing as to whether the Baileys was one that had already been stolen twice and was therefore safe, or it there was still one out there hiding to be ferreted out by the crafty searcher...  Those with something to hide, tried hard not to make eye contact. 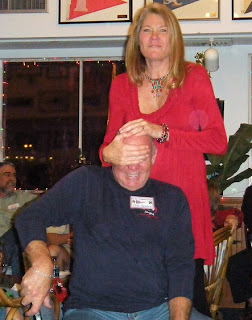 We had a ball!  It got almost dangerous to try to conceal your coveted gift from others...  Here is Lisa attempting to lull Chip into a false sense of security with an impromptu scalp massage, ending in a foiled attempt to break his neck!  You've got a watch that Lisa, she's a sneaky one.  Note to self, next year, nobody steal a gift that she wants!

I ended up with a lightweight flexible "boat" cutting board which will be useful, and a bag full of dehydrated towels.  Yes, dehydrated towels.  Just add water and they morph into a biodegradable towel, for use on the boat.  Wonder where someone found those...

A good time was had by all.  Once the gift exchange was over, we settled down to chat for a while.  Bruce and I had a late night Friday and still got up at 5 am, then ran all day doing "things"...  So we didn't stay very much longer.  Off to the boat to snuggle down in the V-berth where it was cold outside, but warm inside.  Another BYC Christmas relegated to memories of Christmas Pasts.