Yesterday was a long and fun-filled day.  All of the angst about getting here and settling in is now gone. Our B&B is a bit rustic, but our host makes up for any shortcomings.  We came in knowing that there would be no air conditioning.  But we've lived on a boat for years and we are no stranger to fresh air!  Besides... we are in the mountains where the nights are cool and quiet.  We slept like babies and woke up ready to experience mornings on the finca!

Guillermo arrived just as we were finishing our coffee, and we got busy doing the chores.

We followed our host around the farmyard, crumpling leaves between our fingers to release the scent of mint and some sort of medicinal tea plant.  Just getting out of the house required that we duck beneath the winding passionfruit vine, heavy with parcha and flower buds. 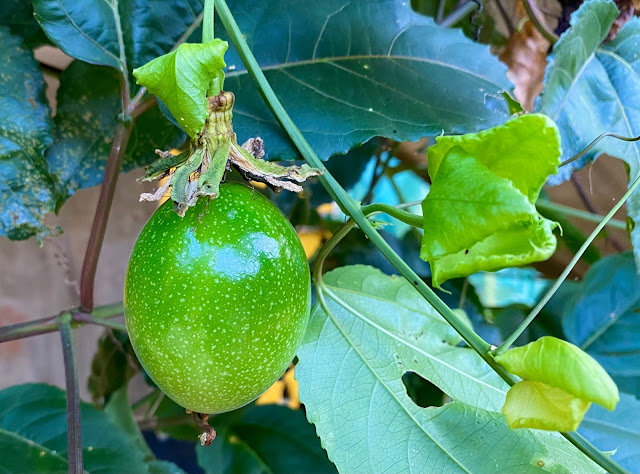 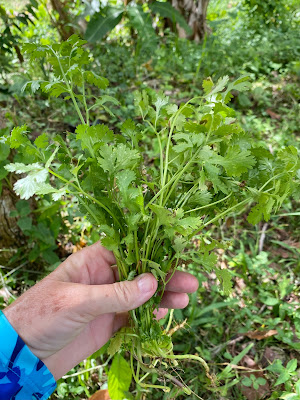 Guillo lead the way around to the backside of the apartment where he bent to shuffle through a clump of weeds.  He straightened up and held out a handful of fresh cilantro for us to take home with us!!

It didn't take us long to figure out what the long bamboo pole was for when Guillo handed it to Bruce.  A bag on the end, rigged with a small knife wired to the edge made the perfect tool for snatching fat, delicious avocados straight from the tree!

By this time, the poor little Buttermilk was losing patience.  He was a hungry boy and he knew that his milk was ready...

The chickens and bunnies were just as excited about their breakfast.  It's too bad that they can't roam the property. If the dogs don't get them, something else just might.  Once the feeding frenzy passed, we went inside to have our breakfast and dress for the day.  Time flies when you're enjoying farm life... and we've got places to go and people to meet!

So, this whole escapade was initiated by a planned hike in Bosque Estatal de Rio Abajo.  There's a hiking group on Facebook and this will be our first hike with them.  Today's hike ends with a chance to see the elusive Puerto Rican Parrot. I've never seen one in the wild, so we're hopeful.  These birds are most likely to be seen in the evening, so we had plenty of time to do a little bit of scouting around Arecibo before we had to head for the meeting place, so we drove north to the coast.

I have so many colored bubbles on my Google map that we have yet to visit.  Today, we knocked out a few more!  The coast road is really fun, and reminds us of the "beach town" vibe we loved when we lived in Port Aransas, TX. It's weekend, so everything is open and people are out enjoying island life. 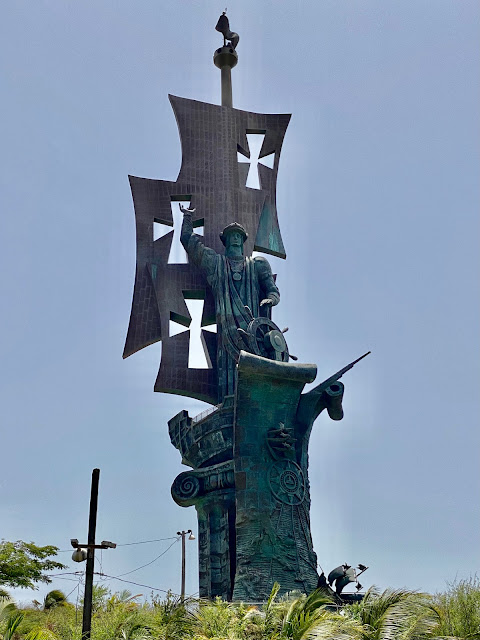 Our first stop was to see the monument statue of Christopher Columbus.  Birth Of The New World far exceeded my expectations!! This bronze statue rises an astounding 360 feet from base to top, and when it was completed in 2016, it became the tallest statue in North America.  Quite impressive, to be sure.  It's beautiful, and I was only disappointed that we could not walk all the way up to the base to look up at it. 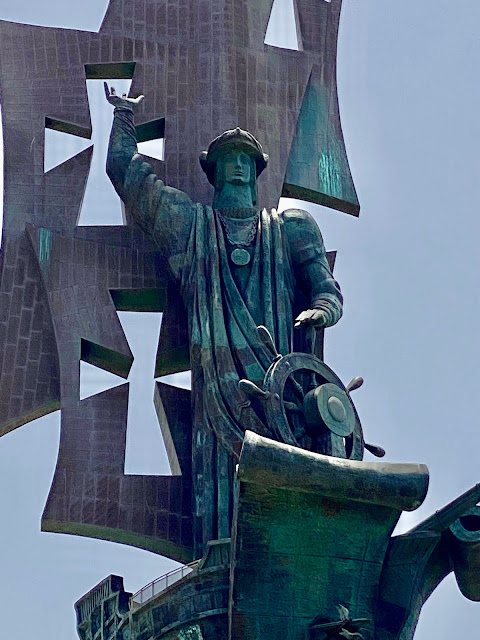 We stopped at the Cueva del Indio site and took a brief look around.  The trail is not long, but it's super hot and we have a long hike ahead of us.  This will have to wait, but at least we know where to go and what to do for next time. Time was marching on and we began to think about food.  We drove back along the coast road looking for pinchos!  We didn't really want to hike on full tummies, and a shot of protein would do us nicely. Along the way, we found another place to visit on our next trip.  There is a very nice attraction at the Arecibo Lighthouse.  I think we're going to need more days!!

We found a pincho place, bought some and drove to the meeting place for a nice picnic.  We parked beneath a tree and changed into our hiking shoes.  The other hikers arrived, and we were ready to follow them to the hiking area.  Evidently they've learned their lesson, that they should meet up in a place that has internet, instead of meeting in the mountains where there is no service for most carriers.  Smart! 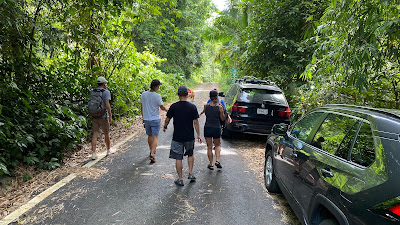 We followed in a line of 4 cars, taking the main highway 10 and turning off at the sign at 6612 that heralds the forest. Turns out that if you just turn off on 621, it takes you all the way to the gate where you park your car and walk in.

There were eight of us in all, plus two big doggies.  All of these people had hiked together before, and they were very welcoming of us newbies.

Bruce and I have done a LOT of hiking alone, so it was very nice to have others to talk to along the way. There is a paved road to a gate, then the paving continues through the forest.  The pavement is a little rough, but easily walkable.  The incline reminded us that we've been walking mostly beaches lately!  Sweat poured from our bodies, regardless of the cool shade of the mountain forest. 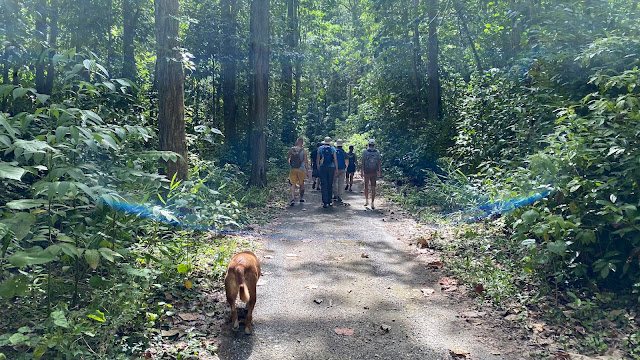 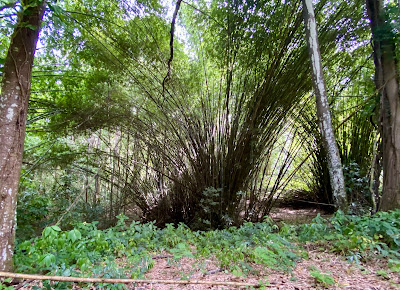 We walked to the end of the paved road where we met another gate.  This is the place where the parrots are supposed to congregate at around 5pm each day.  We were too early, so we backtracked and took a wooded path off the paved road.  This path was tougher going, with rocks in the muddy trail, tree limbs to climb over, and a stand of fallen bamboo that we had to climb through. 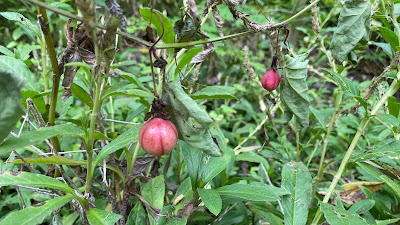 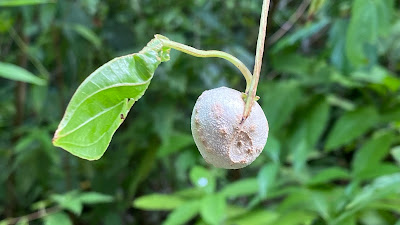 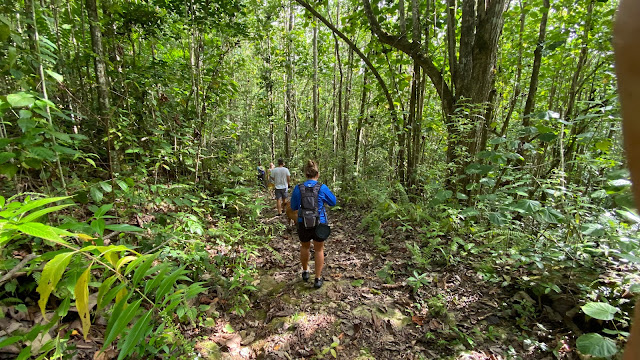 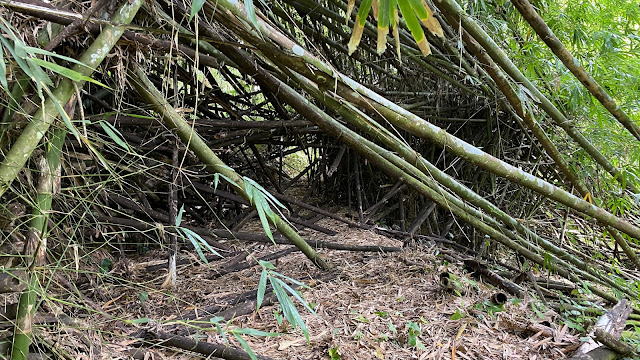 This point is where Bruce decided that he would rather sit it out and wait while I followed the others onward.  He knows his limitations and has had some recent trouble with becoming overheated, so he is extra cautious.  I left him sitting with his music and some electrolyte water. He was perfectly happy. 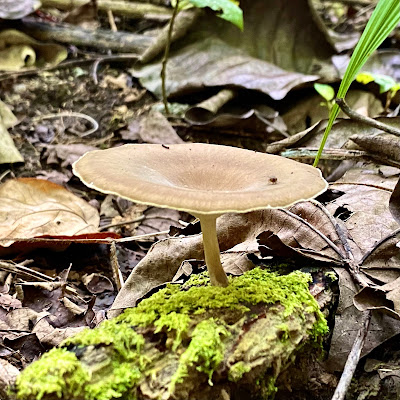 I caught up to the others and we hiked along in companionable conversation.  These people like a lot of the same things I do, so it was really nice for me.  Our destination was a small cave that nobody has been to before.  After walking some distance, I began to worry about leaving Bruce alone for too long, so I told the others I was going to turn back, and waved them on their way.

It was kind of fun backtracking through the seldom used forest trails.  You really had to be vigilant because it was easy to leave the trail.  But I made it back to the bamboo tunnel and Bruce, just about the time one of the other hikers, Nancy called out my name.  She got worried that I would get lost and followed me out.  I felt a little bad that she didn't get to see the cave, but she assured me that she was primarily here for the parrots. 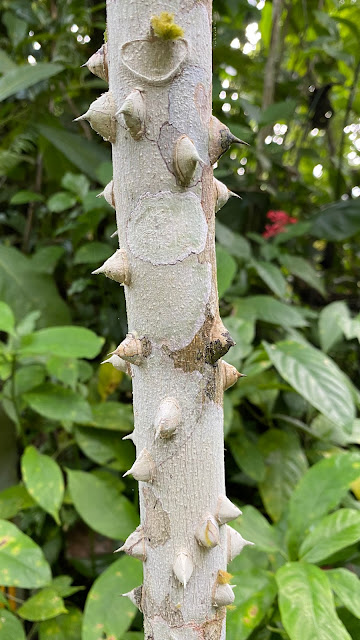 So the three of us returned to the paved trail and walked back up to the fence to wait for them.  We stopped talking and listened intently to the quiet of the forest. It was magical really.  Nothing but the sounds of nature, the occasional bee buzzing by... a bird squawking.  We thought we heard a flock of them.  We're almost sure of it.  They seemed to quiet down when we made noise, so we had to be silent.

The rest of the group returned, causing another hush... Well, we have to get back to our B&B and really didn't want to drive in the dark, so we were the first to turn back for the hike to the car.  The others agreed, as they were coming from San Juan and had much farther to drive than we did. 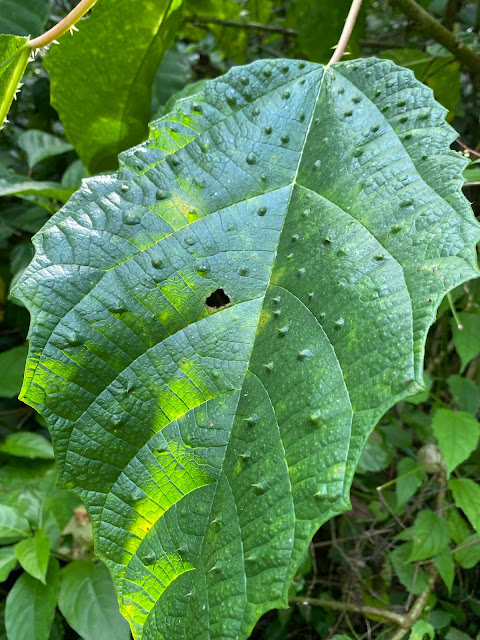 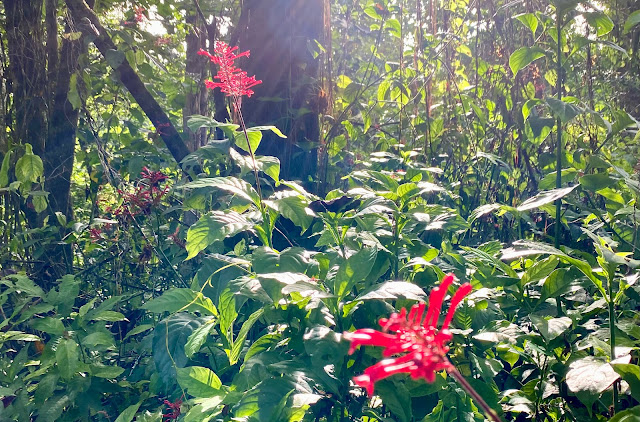 We ended our hike at under four miles.  A bit longer than we've been doing lately, but we had plenty of time and distraction.  I would definitely do this hike again! We said our goodbyes and drove back to the finca where we found Guillermo waiting for us.  We opened a couple of adult beverages and enjoyed the company.  Guillo gave us a sample of the Rellenos de Pana he had made out of canned corn beef and breadfruit from the tree out back.  So delicious!  He even gave us half a dozen of them frozen to take home with us!  This guy...Then, he led us around back and left us beside a pile of wood while he went in search of pine needles to use to start the small bonfire. Left alone in the dark, pleasantly weary from a full day of hiking and exploring, and maybe a wine cooler... we looked up at the dark night sky. Tall pine trees loomed darker and the stars were coming out. The sweet scent of mountain air was intoxicating. I could hear some unidentified bird to our left... When Guillo returned he told me it was a little Múcaro, the Puerto Rican Screech Owl. How awesome is that??? 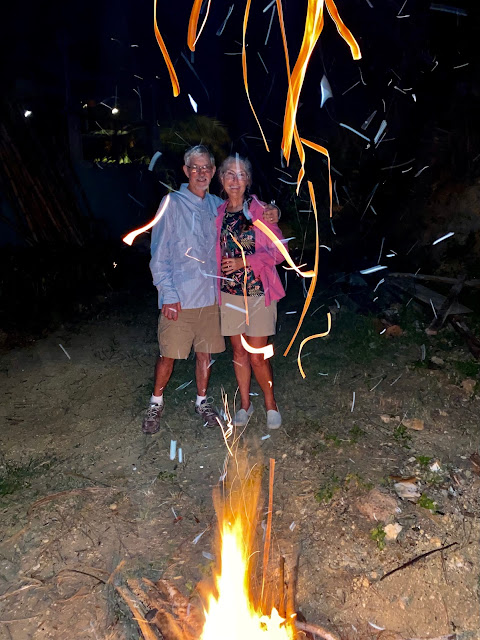 The fire got going and we talked and laughed.  I told Guillo that I want to help him plant the new coffee trees he has waiting to go this fall.  I know we will come back to this magical place, and I hope that Guillermo and his wife will come visit us so that we can return the hospitality he has shown us. 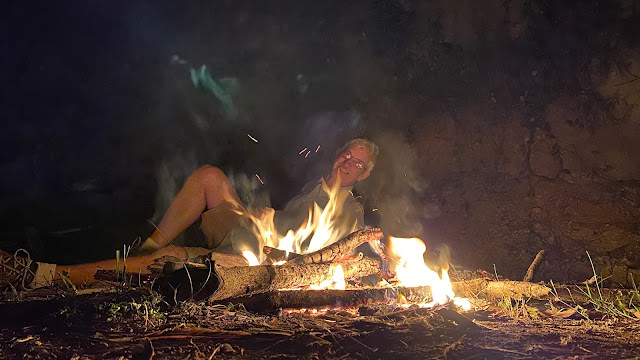 Eventually our fire died down and we said goodnight.  One more peaceful night in the mountains, and we must go.  The dogs kept us company while we drank our coffee and waited for Guillo to return again. He loaded us up with more avocados, and even a potted plant that he insisted I take!  Hopefully I won't kill it! 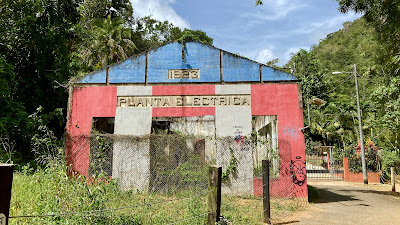 The way home was beautiful, and we stopped to check out one more spot for future reference.  Cascada La Planta is a man made waterfall.  It is part of the hydroelectric plant from the 1920s.  We drove in and walked the short trail alongside this man-made river, to the first falls. 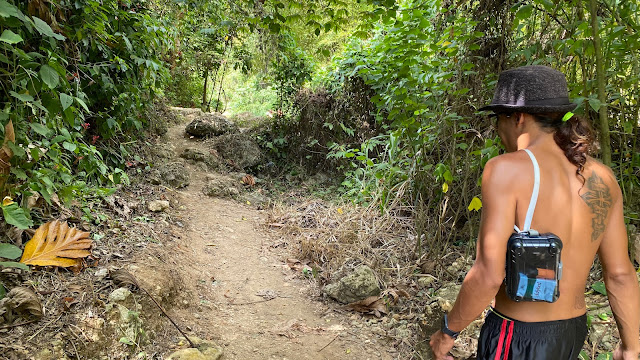 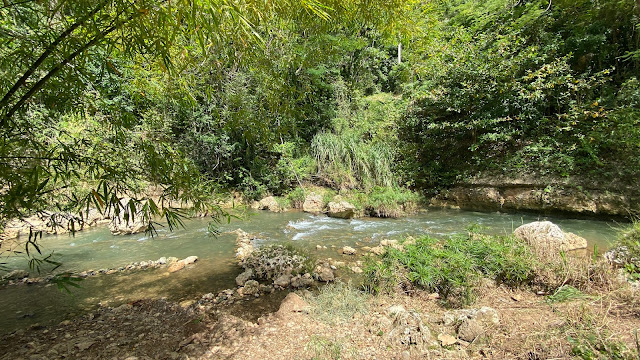 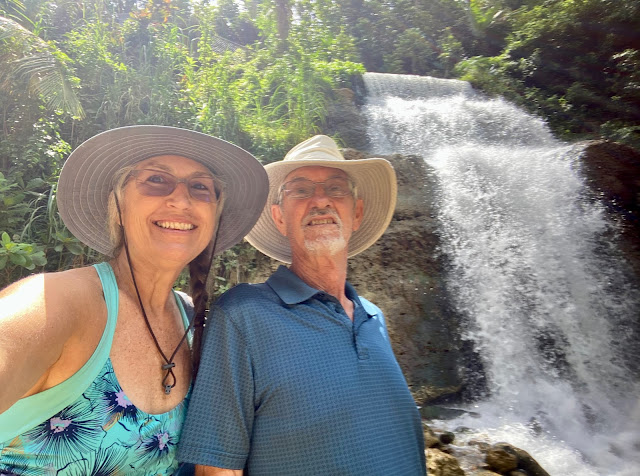 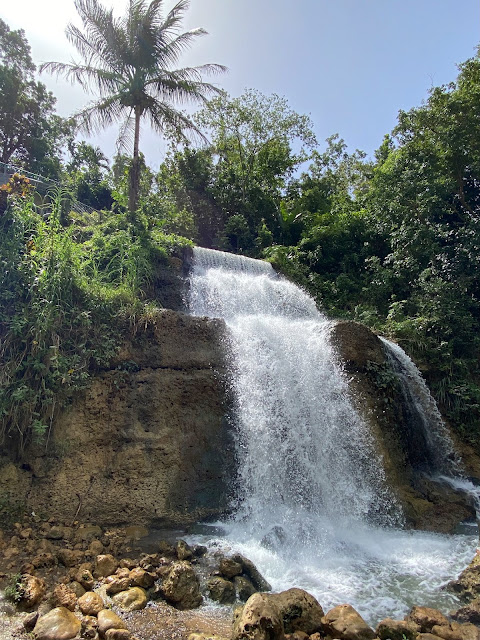 There was a man there trying to get under the falls, not a very smart move if you ask me.  But he did it and didn't die, so there's that!  We will put this on our list of places to visit next trip out this way.  The river looks very inviting and there are more falls upriver.  Awesome!


This concludes another fabulous staycation here on our beautiful island!