Girls On The Loose And Bruce ~ Rainforest Edition And Horses!

We had so much fun taking our neighbor, Sue, along with us on our last Staycation, we invited her to go again!  With the days becoming warmer, we though we would get away from the coast, and go up into the rainforest to find a refreshing mountain river to cool us off!

Casa Parcha is a property situated on the banks of Rio Blanco, in Naguabo, PR.  There is a well known pool here, Charco el Hippie, where lots of people come to play!  But Casa Parcha has a private little section where you can practically have the place to yourself!

There is one little apartment available, plus three very nice tents for camping.  The tent guests have access to a bathroom and a lovely outdoor shower, as well as an outdoor lounge, complete with a kitchenette!  We booked the apartment, and when we extended the invitation to Sue... she only balked for a second when she found out she would have to book the TENT for herself!!  I've gotta say, I had my doubts, but she made her tent stay look so inviting... we're thinking that WE will camp here next time!

But... as usual, I am getting ahead of myself.  Of course we can not just drive straight to a place... I have to make "getting there" as much fun as the destination.  Today, we got there... after a relaxing ride in the mountains on horseback!  In typical Puerto Rican style, getting the details straight was a little bit of a challenge, but Pedro and his staff at Hacienda 8A took very good care of us once we arrived! 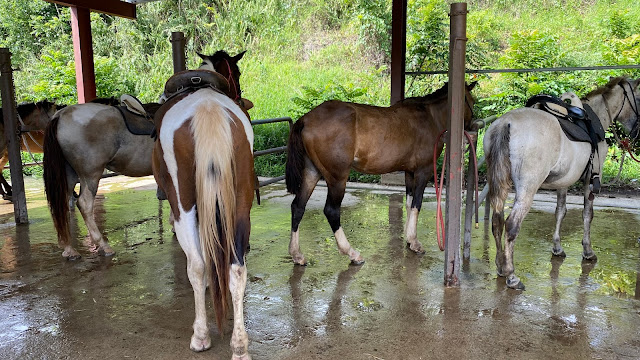 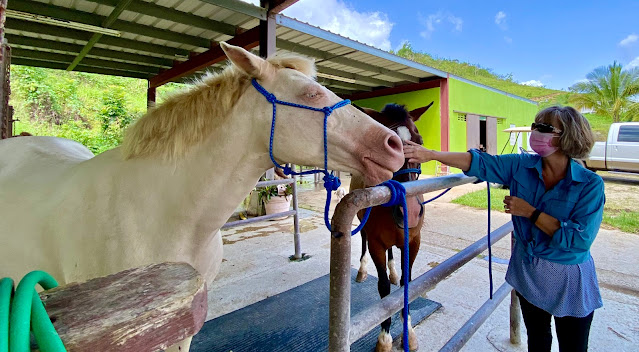 Our appointment was at 10:00, and we arrived at 9:30 to find another small group waiting for their ride to begin.  They were scheduled for 8am!  Pedro seemed a bit surprised at our arrival, and only missed one beat when we told him we were there for a two hour ride!  Guess the scheduler was sleeping on the job... But regardless of the fact that the stables are CLOSED on Mondays, they saddled up three more horses, and we proceeded with the process! 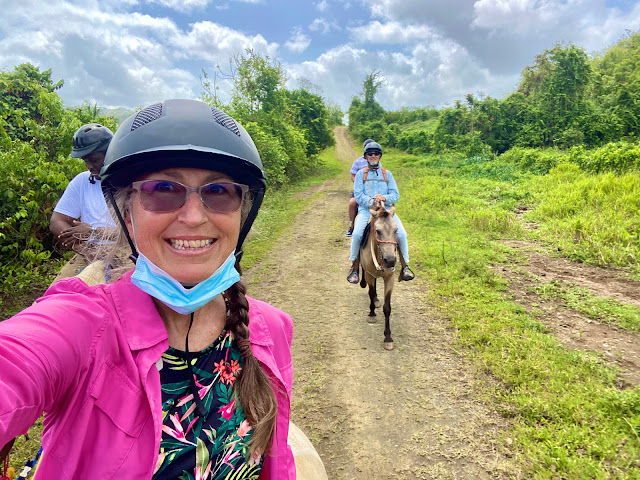 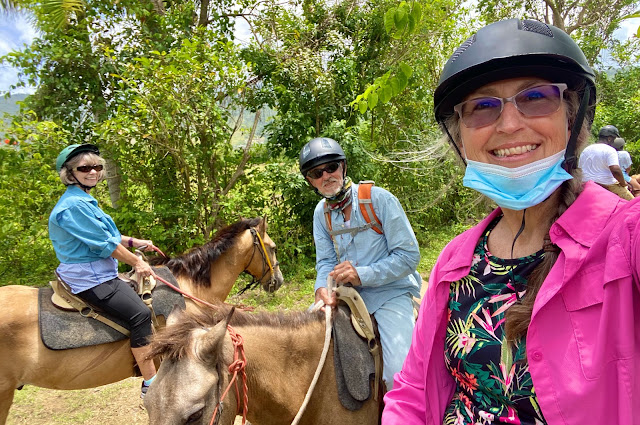 This is the third horseback ride we've taken in Puerto Rico.  It is by far, the most laid back!  We did wear helmets, but that seemed to be the only safety precaution taken!  There were no instruction, not that we needed any... but still!  Sue's horse, Principesa, was very boisterous.  Bruce's horse, Bolón, liked to kick!  My horse, Pinto, was juuuust right!

Along the route, we encountered a whole bunch of cows.  They were very curious about our activity.  So much so, that Pedro had to ride ahead and scatter them off of the pathway!  A little dog wove in and out among our horse's feet all along the way.  Pedro told us that the little dog had simply appeared here a couple of weeks ago, and it seems that he has found his home!  He accompanies all of the guests, and the horses don't seem to mind him at all as he ranges here and there!

Unfortunately, Principesa was not content to hang back when Pedro hurried ahead.  She followed fast and Sue was rattled a bit.  Turns out, she had already been caught in the scuffle when another horse decided to kick a bit... So Pedro ended up switching horses with her, and things got better for Sue after that. 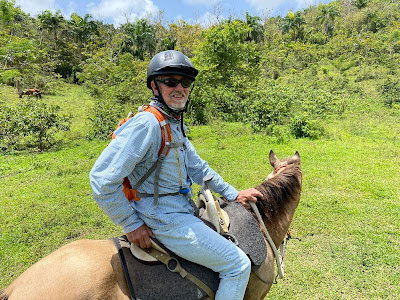 After the first hour, Pedro called his staff to come and get the other half of the group, as their ride was over.  We waited for a bit while they were led away, then we continued on up to a serene mountain lake where we watched cows drink, a horse graze, and iguana dive into the lake for a swim!

The view is just stunning! We chatted with Pedro and got to know one another better!  He was VERY curious about our life on the boat!! 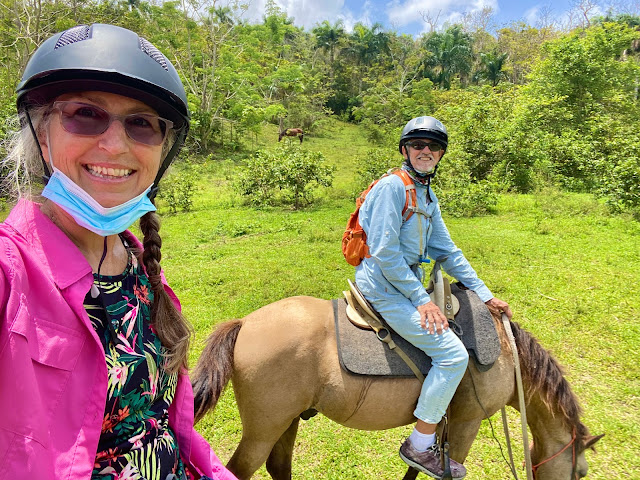 Our ride continued, and I think we did a little housekeeping, as our next destination was to close a gate that had been left open.  Still, it was really nice just being up there in the hills, with the looming shadow of El Yunque in the not-so-distance!  Eventually it was time to turn back... 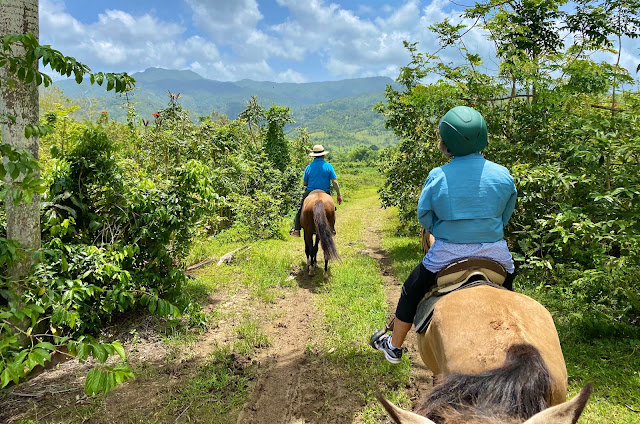 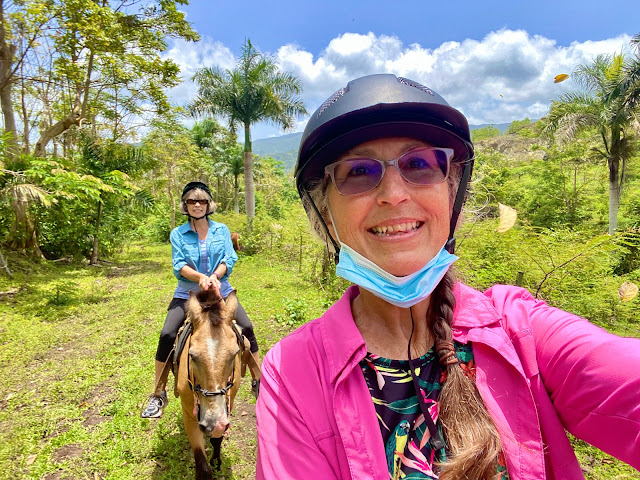 Unlike all of the previous horseback rides I've been on, we were not restricted to staying in line according to pre-ordained order.  We were able to come up and hang back as we wished.  Sometimes I was out in front, while Pedro hung back and chatted with Bruce or Sue, and other times, I was in the line.  Being able to take photos along the way was, of course, the biggest perk of all!  Everything was just so CHILL! 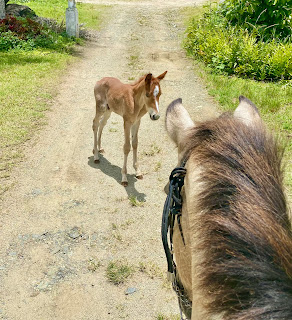 Back at the hacienda, we found a mamma and baby hanging out in the path!  This little guy couldn't have been more than a few days old, because he was very unsteady on those long legs! He moved out of the way, and pretended to chomp on the flowers like his mamma, but he clearly didn't get the point of it! SO. STINKIN'. CUTE! 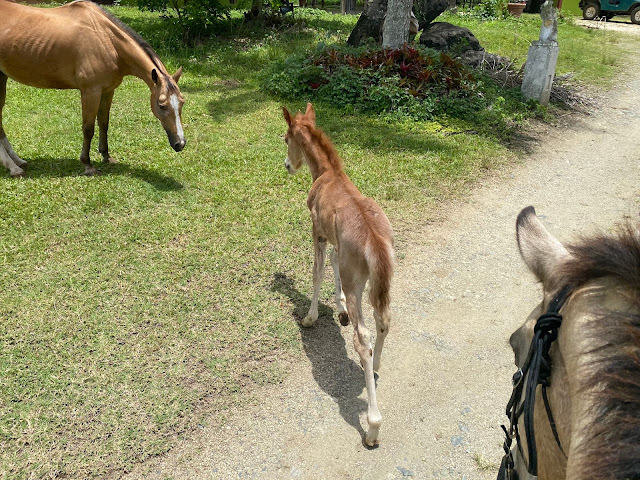 Our two hour ride that was to start at 10:00, wasn't over until almost 2pm!  By that time we were ravenous!  I had a place picked out!  A Mexican food place that I have been dying to try... but when we pulled up outside, it was CLOSED!  We could see them inside and it looked like they were shooting a commercial.  How RUDE! 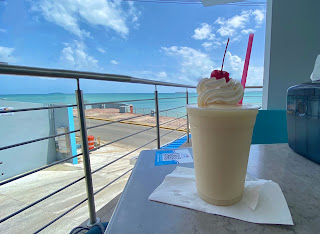 So... we pivoted, and headed for the Malecon to find sustenance.  We chose a place on the water called El Coral, with upstairs patio seating, and had a delicious fish meal.  It wasn't Mexican, but it was still very good! 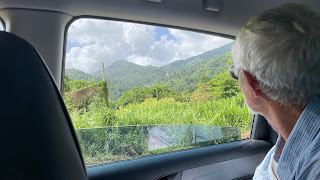 All of this has been timed perfectly for our checkin at 3pm... but I can't take credit for the Universe's plan... We finished up our meal just in time to arrive at Casa Parcha at precisely our check-in time.

When we drove up that final steep hill and entered the property, it felt like we had arrived to the Garden of Eden!  Everything was so perfectly manicured, with tropical flowers growing everywhere! 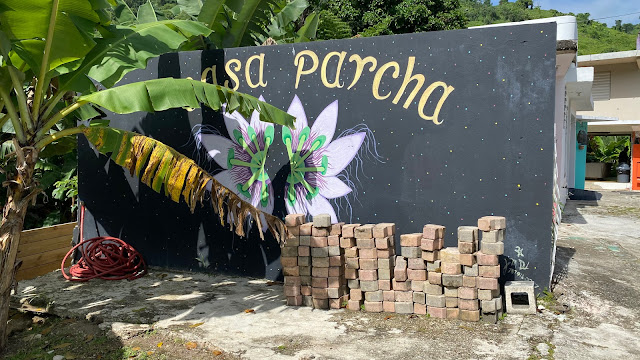 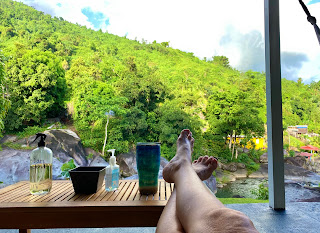 They were still finishing up with the cleaning of our little apartment, so we grabbed a beverage and waited patiently.  Wow!  What an amazing place!  I had no idea that it would be this magnificent when I chose this property... Sometimes you just get lucky!
Soon, we were beckoned to come move in... 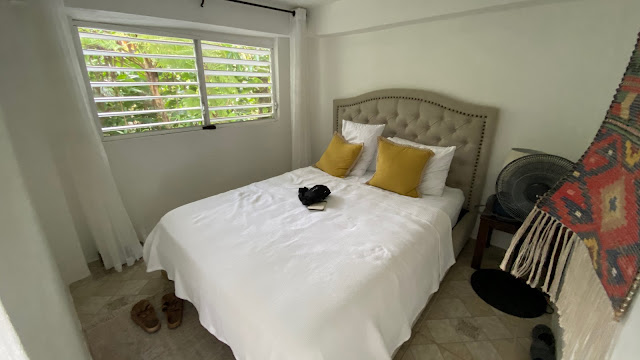 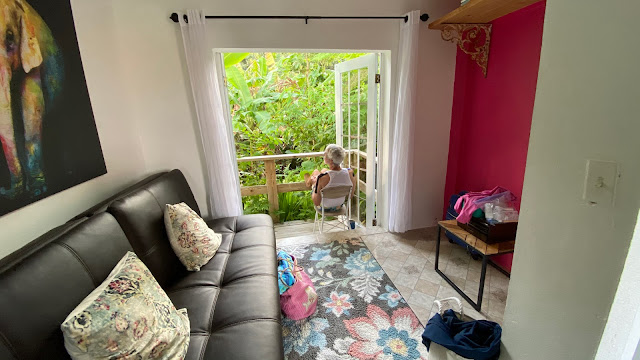 The little apartment was cute as a button!  We had a small kitchen, and we moved our things into the fridge, put our clothes away and rejoined Sue on the patio to sit, and just watch the changing light on the river in awe... 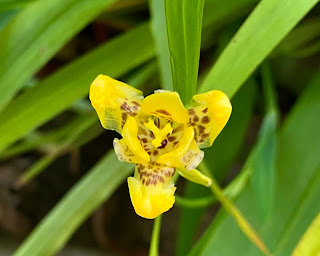 The pathway is surrounded by lush tropical flowers, and I just had to take some photos!  It's been a while since I've seen so many of these beautiful flowers... must remember to get back to the mountains again soon!  This area reminds me a lot of our time in St. Lucia, and that brings a very good feeling... 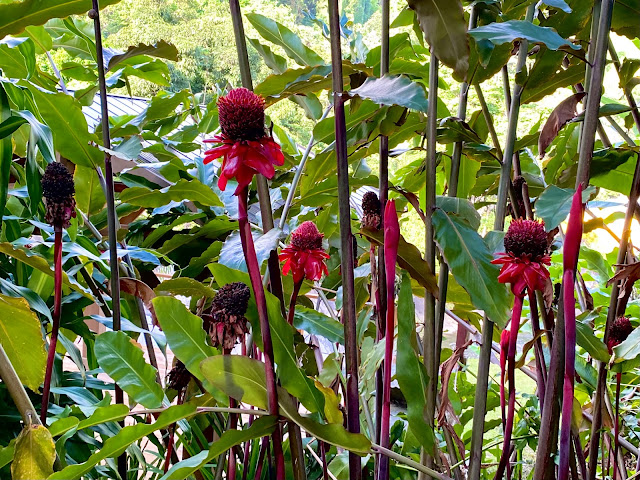 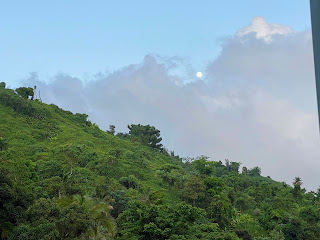 That was pretty much it for our day.  We sat and enjoyed the setting sun, the rising moon, and the crescendo of coqui song that rose up all around us!
I have to say that our staycation is off to a great start, and we are totally happy with our choice.  Casa Parcha is perfectly situated in this magical place... and we have only begun to realize how lucky we are to have found it!
With the setting of the sun, the coquis grew increasingly loud!  The string lights came on, making the magic even better!  We didn't stay up long, but soon, made our way through the Coqui pathway to our rooms for a good night's sleep! 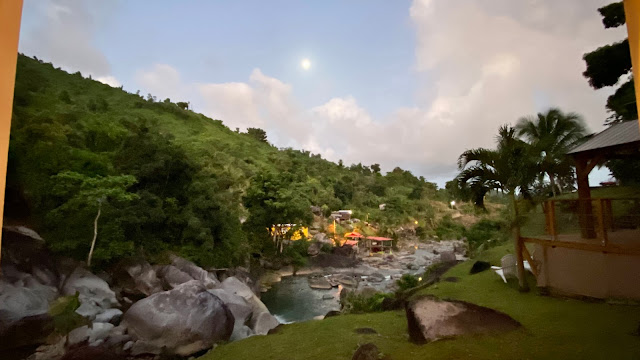