A Glimpse Of Canyon San Cristobal 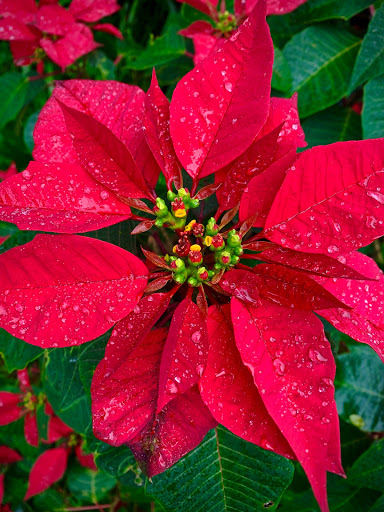 San Cristobal Canyon slices through the Cordillera Central Mountains, and runs between the towns of Aibonito and Barranquitas. It is deep and wide, with the Usabon River cascading down the Aibonito side in several breathtaking drops, punctuated by crystal clear mountain pools.  There are many groups in Puerto Rico that run tours, and most of them are geared toward the more extreme hiker.  Today, we joined our friends at Para La Naturaleza for a more sedate tour that provided us a glimpse of the majestic canyon, and gave us a little more knowledge about the flora and fauna of our new island home 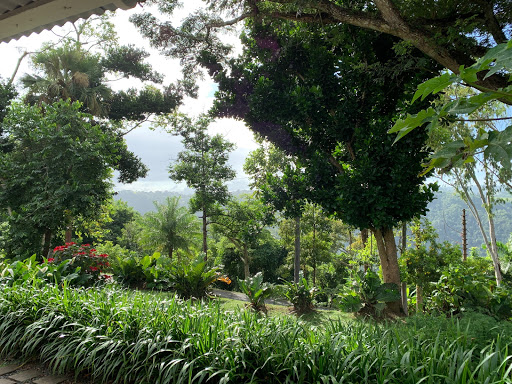 We drove to the Barranquitas side of the canyon and entered the beautifully kept grounds of the Para La Naturaleza property.  The volunteers and paid staff have carved out a tastefully manicured haven in the jungle on the side of the canyon.

Being that we're on a tropical island where it's never winter, I was surprised to find a lush poinsettia bush growing right alongside the more tropical plants!  All were wearing the droplets from a recent passing rain shower. 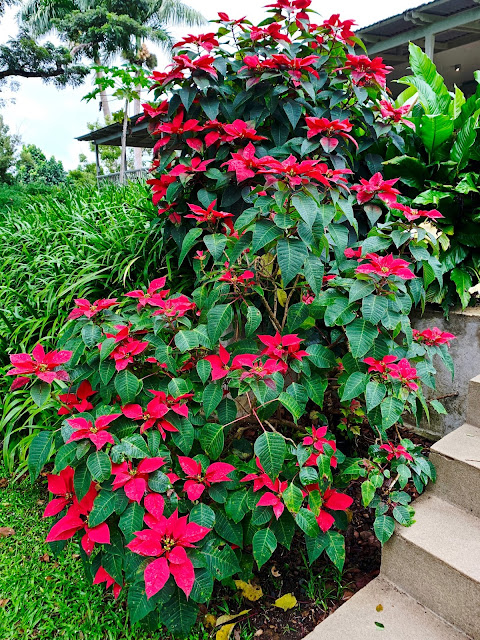 We had some time to wander around and drink in the freshness of the mountain air.  It's much cooler here than the coastal planes where we live.  But even in November, it's still relatively warm in the Caribbean.  I took the opportunity to take some photos while we waited for the rest of our group to arrive. 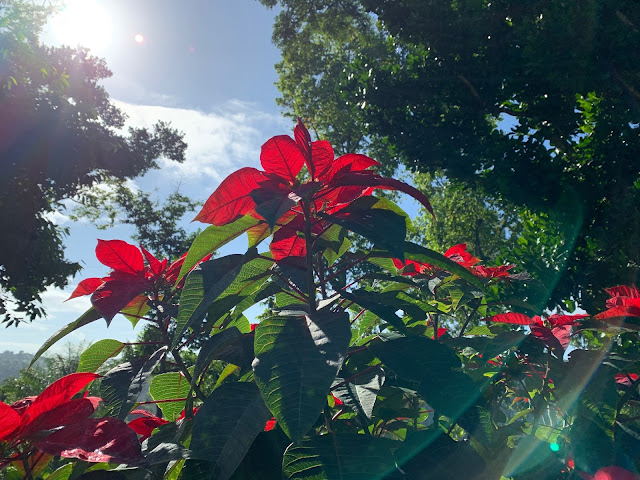 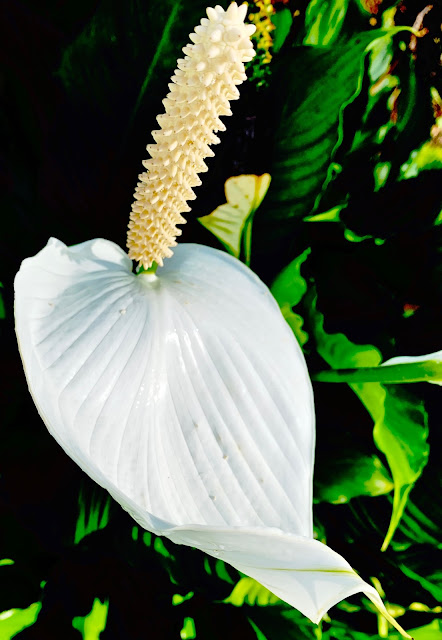 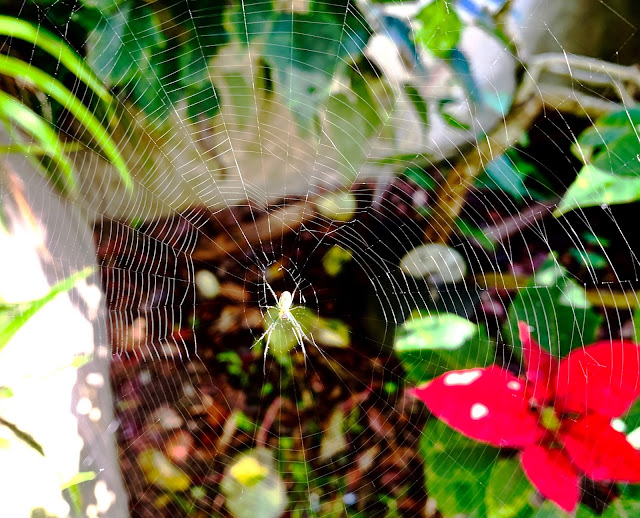 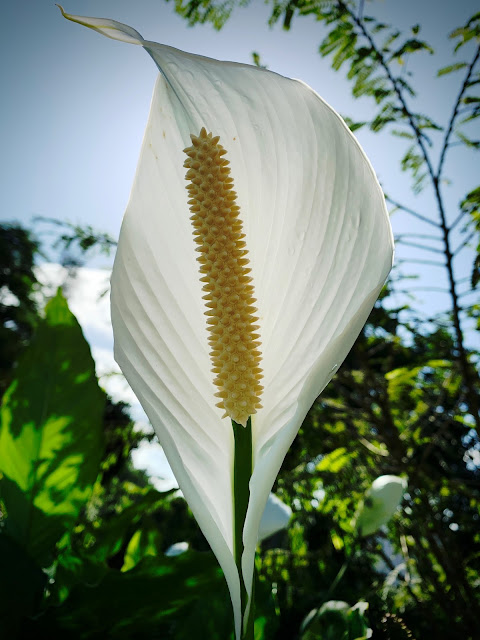 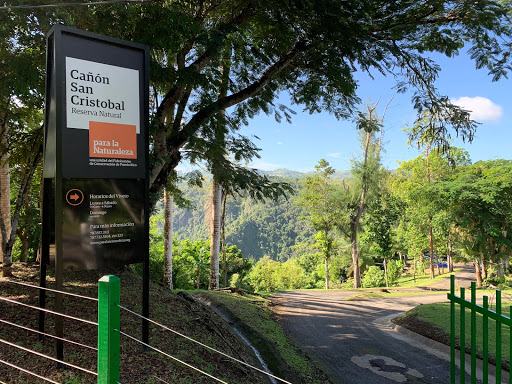 Once everyone was gathered, we started our walk, following behind our very knowledgeable guide, Yina (Gina).  This property all belongs to the nature reserve, and while we took a guided tour today, it is perfectly allowable for people to come on their own.  Just check in at the headquarters and follow the pathway.

We will put this on our list of places to take our visitors in the future!  It's an easy walk and the views are very nice. 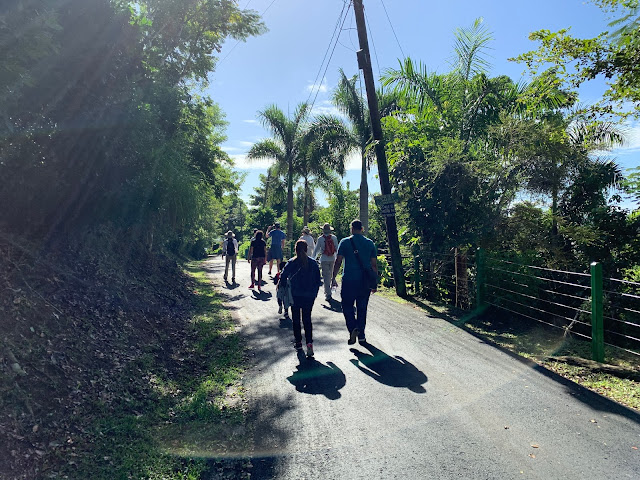 Of course I can't tell you all of the things we learned, but I'll post some of them.  It was fascinating to see this simple Yuca plant growing in a patch.  Yina explained to us that the Maya people used to plant this endemic plant in patches along the perimeter of the fields in which they kept their animals.  It provided a natural deterrent for the livestock leaving the areas where they were pastured.  It also deterred thieves, so it was used along property lines. 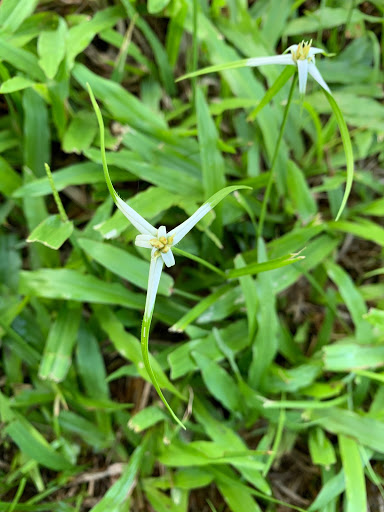 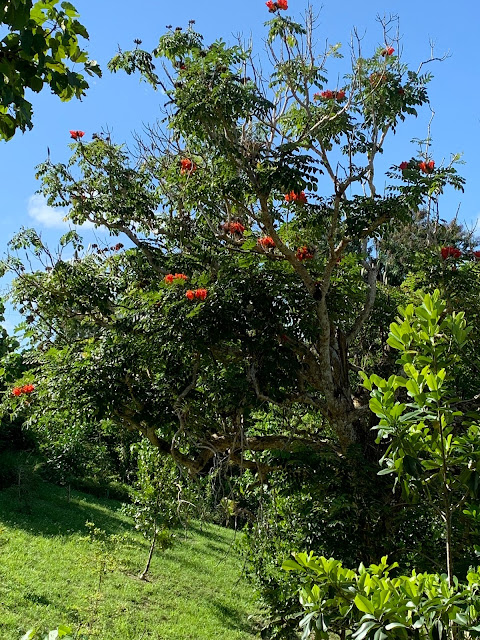 We continued on past fields with freshly planted trees in various stages of growth.  The organization is practicing habitat restoration and they need volunteers! As we walked by, we were given the names and characteristics of each of the trees. Along the way, we were shown which trees were not native to the island.  This African Tulip tree is growing everywhere on this island, and others we have visited throughout the Caribbean.  It's amazing just how invasive a thing like a tree can be! 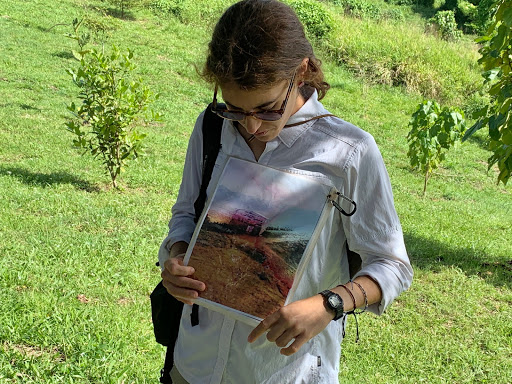 Some spots were interesting, in that Yina carried a book of historical photos.  She would stop in the same position from which the photo was taken, and we got to see a "then and now" comparison.

She told us about things large and small.  The trees here in this area are covered with multi-colored lichen.  Now it might seem that this is a bad thing, but Yina told us that the amount of lichen growing on these trees, can tell the health of the environment.  They grow more in wetter times, AND the presence of these types of lichen can signify higher air purity.  Looking around us, we can see that there has been plenty of rain, and the fresh mountain air we're drinking in is super pure! 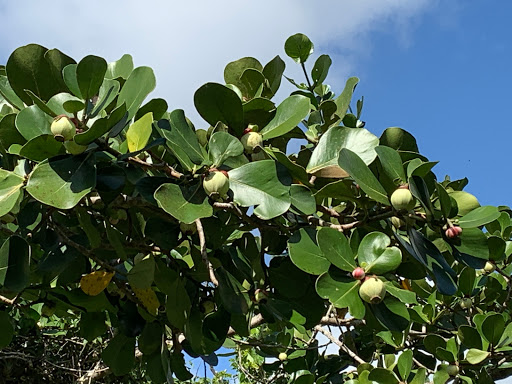 The next awesome thing we learned was that this tree, with its little white "apples" has earned the nickname "autograph" tree, by means of having been used as a sort of "paper" by indigenous tribes. 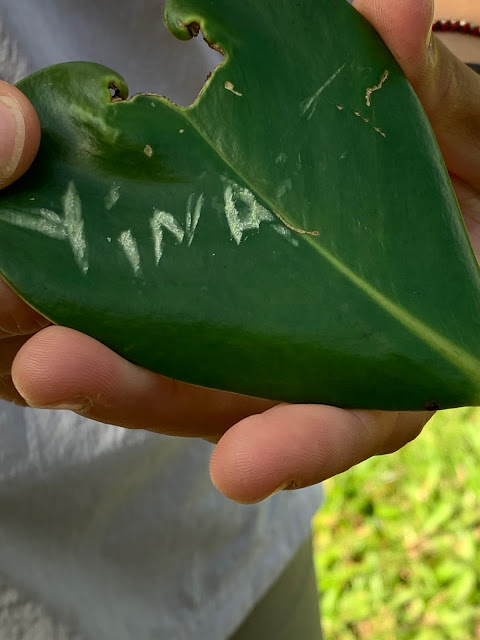 You can actually take a stick and write your name in the leaves.  The pressure turns the leaf white!  This will remain there long after the leaf turns brown.

Cool, right?  Oh, but don't eat the apples... during at least a portion of their lives, they are poisonous! 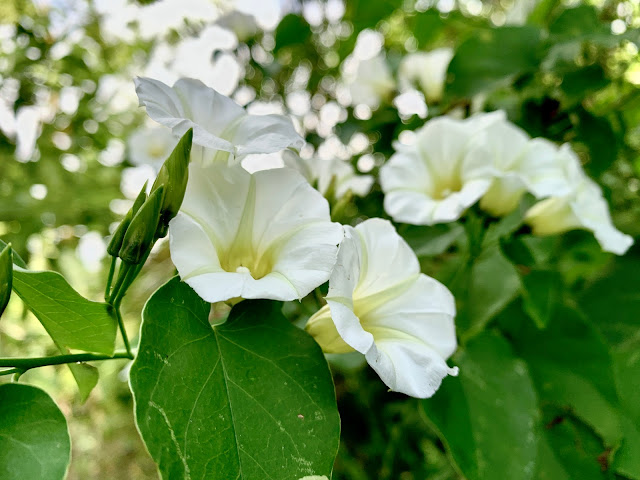 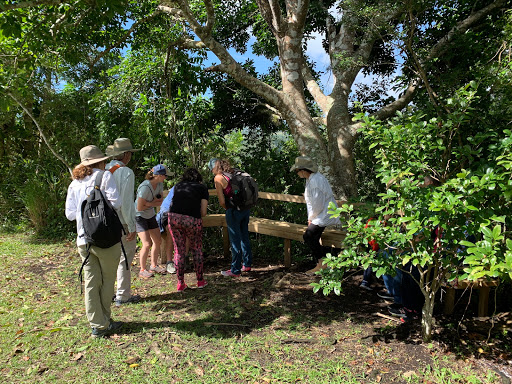 At the next stop,  we sat for a while in a shady spot across the clearing from the ruins of an old stone building.  This crumbling structure taught us that people once built their homes on top of their water storage structure.  This kept the water cool and if it ever sprung a leak, it wouldn't run down into the home. 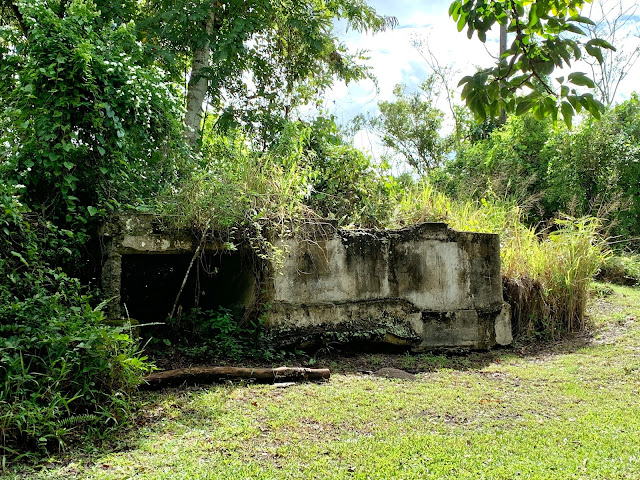 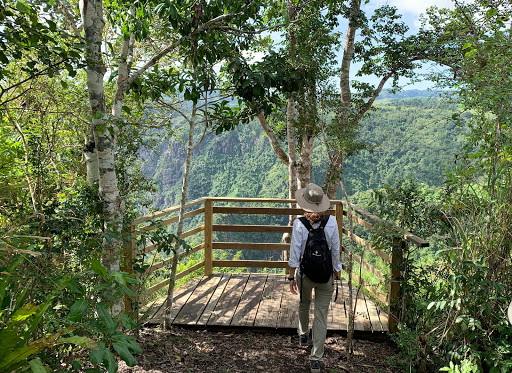 Our last stop was the best!  There's a small overlook that provides a breathtaking view of the canyon.  You can see where the river begins across the canyon on the Aibonito side.  The first falls is near the top, and there are several making their way down the side of the canyon.  Today, the river was running red with sediment and moving fast.  Much of the time it is said to be crystal clear with inviting pools below each of the falls.  Chances are that we will never see those, as it is a little above our skill level as far as extreme hiking goes.

Here again, Yina had a photo from long ago.  She told us that over to the right, there was a cliff that was used as a trash dump for decades.  People would just back up the trash trucks and dump everything into the ravine!  Pretty short-sighted if you ask me!  But eventually, people wised up and they've even cleaned up much of it.  It's pretty much jungle down there anyway! 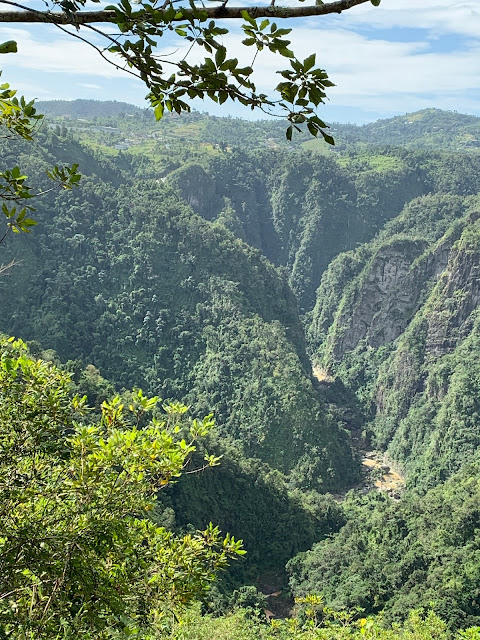 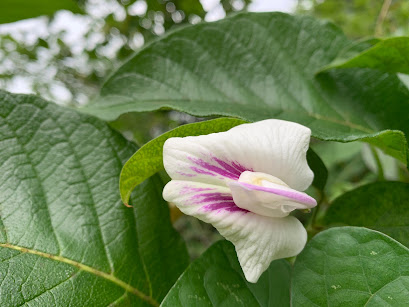 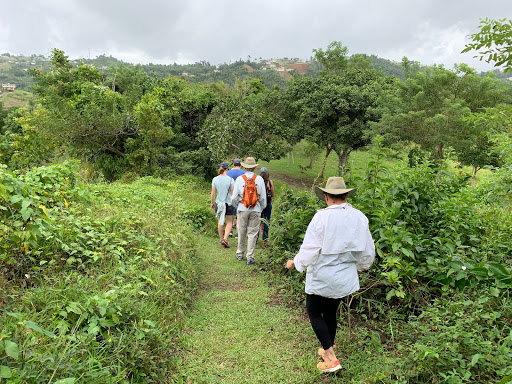 We left the overlook and tracked back toward the main house.  There are greenhouses where endemic plants are being cultivated for planting.  We ended up buying one of the little  Tintillo Trees.  These were used by Puerto Ricans since the early 1900s as Arboles de Navidad... or Christmas trees! I'm going to use mine for that! 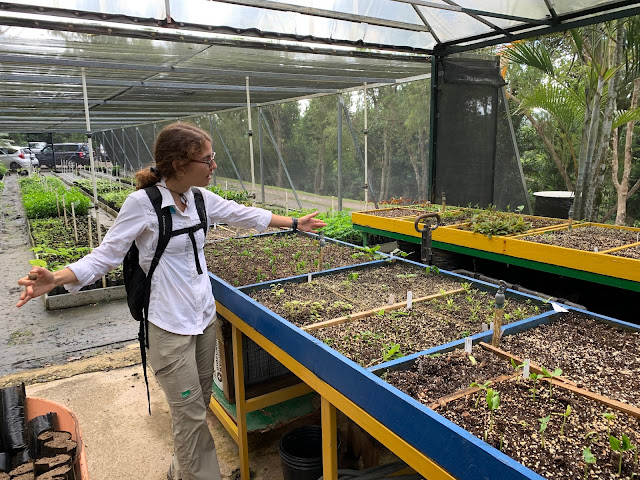 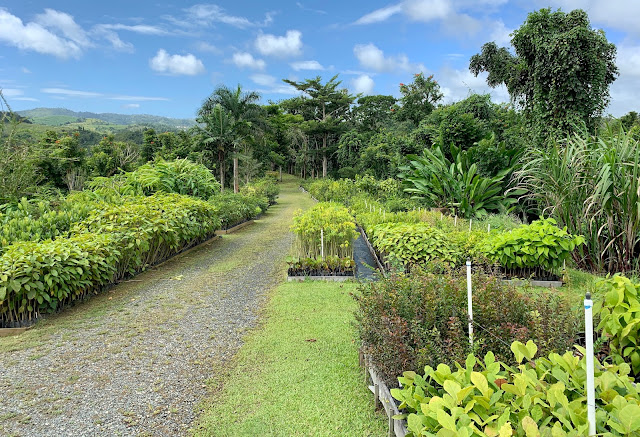 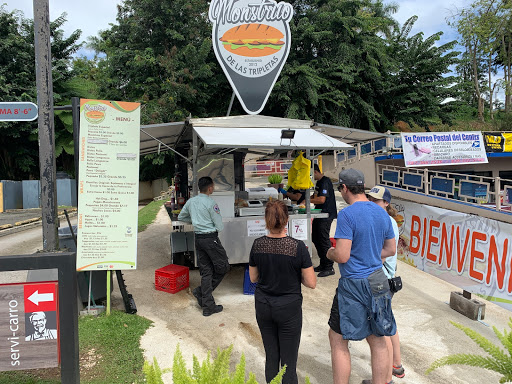 What a wonderful time we had wandering the garden paths and learning new things.  The fact that it's not cold here in the middle of November, is a reminder of what we love about living in the Caribbean!  We said our goodbyes and drove off in search of FOOD!  We found a little food truck that was still serving a late lunch, and put in our order for Tripletas!

A nice drive home, and this wonderful day of exploration is at an end.  And I've got my little Christmas tree to show for it.  I had been fretting about what sort of tree we would have for this first Christmas in our new home.  Funny how things just work out.

Canyon San Cristobal is a natural treasure here on the island.  Maybe some day I'll figure out a way to get us down there without having to work too hard.  But for now, A glimpse will have to do!