Saturday Rambling And That Beach We Missed!

Some mornings I just wake up and feel the need to roam!  I've gotta say that today, Bruce wasn't on board, but when I told him I was ready to leave... he blinked a couple of times, changed clothes and got into the car!

As many times as we drive these mountain roads, we always see something that we missed before.  We've got our favorites, but today we picked out a couple of new roads to travel, just to keep things interesting.

The thing that got me out of bed this morning was seeing an advertisement for the Farmer's Market in Caguas on Facebook.  Caguas is one of the larger towns and it's not too far away... just over an hour if we take the mountain roads.  It took us a while to find the entrance to the parking area, but we figured it out and I updated the location on Google Maps!

The market started at 8am and it was about noon by the time we arrived... so I imagined that things would be pretty much picked over, but there were still some goodies and we did our small part to support the local economy!

The breadfruit is growing like crazy, here and I've been looking for one so that I can make some fresh fried Breadfruit chips.  In Grenada, and throughout the Caribbean, the locals mostly cook it by boiling it alone, or with other root vegetables.  I can't say that it's a favorite because it is mostly flavourless done that way.  But in the Bahamas, we had it as chips that were served with conch salad.

I don't have any conch salad, but I do have some yummy garlic salad in the fridge that would be wonderful with a fried breadfruit chip instead of the usual crusty bread we serve with it.  (see more about that at the end of the post)

After we made a pass through the market and bought everything that interested us, we made another short hop to our next destination.  There are companies here in PR that operate like Groupon back in the US.  I picked up a nice one just this morning for a restaurant that looked good... Guacamole Al Fresco.  With a name like that... it HAS to be good! 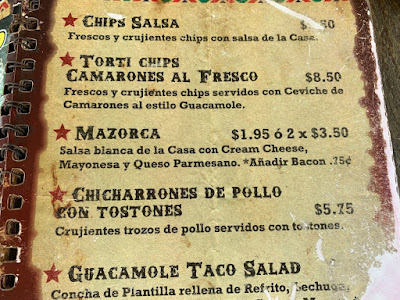 We had no idea what this was.  The server took off and came back in about ten minutes with this tray of two corn cobs on sticks.  They were rolled in a mix of white sauce of some kind, made with cream cheese, mayo and parmesan cheese.  OK, we'll try it!  O. M. G.  Heaven!  This beats the street corn we've been eating in Grenada all to h$ll!

We gobbled it down like we hadn't eaten in weeks... then the main courses arrived. 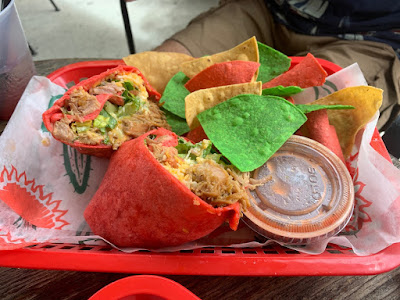 Festive red and green chips with red tortillas!  Bruce got the pork burrito, and I got the chicken quesadillas.  I don't know what they did to these meats, but they were mouthwatering, tender, moist and flavoured like we've never tasted before!  SO. GOOD!  And the sangria was pretty good too!  We will be back here!  An hour isn't too far to drive for a delicious meal! 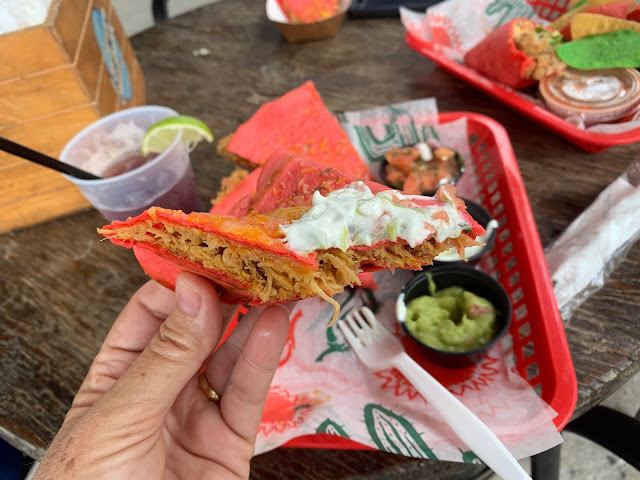 We were smart and while we wanted to finish it all, we knew that we would be comatose if we did... so we saved half for dinner!  Still feeling the need for some exercise to get the blood pumping again, we added an unplanned stop to a beach we missed on our last drive!

A few weeks ago we met a guy on our beach hop along the east coast.  He told us not to miss Playa El Cocal because it was the BEST, but we had already passed it by.  Today we set out to correct that mistake!  I entered it into my Google Map to find directions, and then chose the more obscure road through the mountains.  Now this could have gone either way... some of the roads are nearly impassable after Stormagedon of 2017, but we got lucky today and it was just a nice drive! 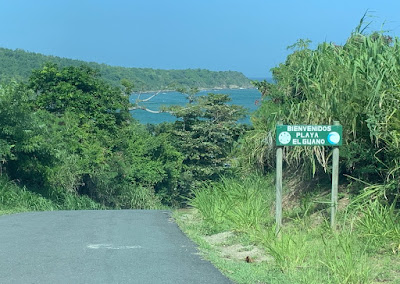 Leaving the main road to head east toward the coast, we plunged down, down and more down.  This road had to take us from halfway up the mountain, to sea level in a very short distance.  I'm happy to say that this caused me not the slightest discomfort.  Back when we first moved here, this road would have stopped me in my tracks.  I think I'm beginning to get used to it!

Nearly there, we saw this sign that welcomed us to Playa El Guano.  Now in my mind, that's "Shit Beach"!  I guess the locals have different names for their beaches than what is posted on Google Maps.  My thought is that they are just trying to dissuade visitors so that they can keep this treasure to themselves!  Well Played Boricua!  Well played! 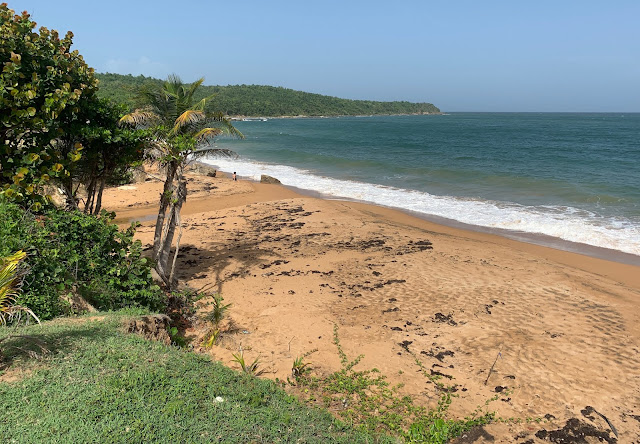 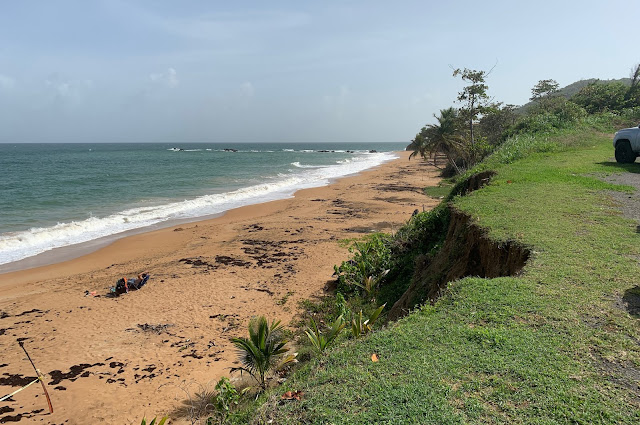 There is a nice parking lot on the bluff above the beach, and a second lot closer to the bridge that leads over a ravine to the sand.  We parked up top and just stood there for a while taking in the beauty of this place.  The long, curving stretch of golden sand was steadily trounced by a single romping wave line!  There were families with small kids enjoying the shady tree lined beach, chairs parked in the palm tree shade... lunch in the ice chest, teenagers playing with water toys... just a perfect day at the beach tableau. 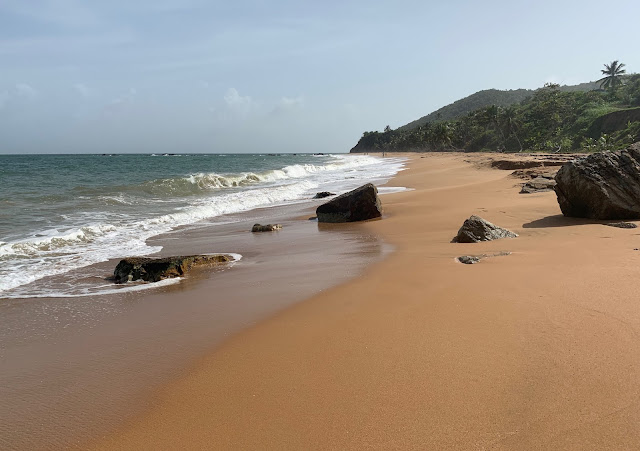 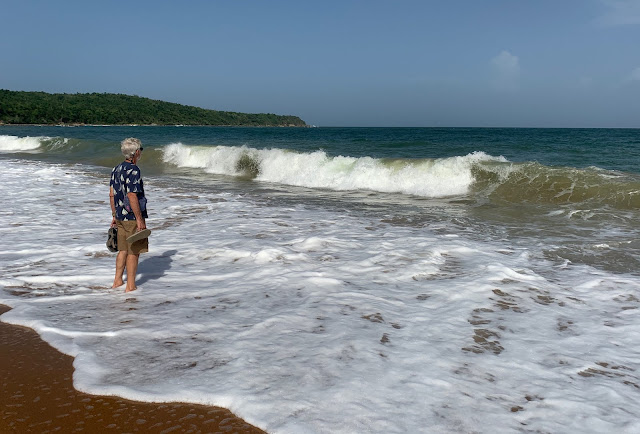 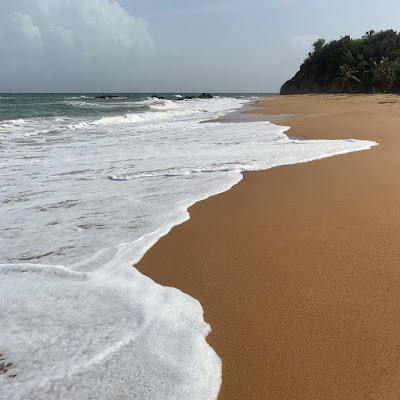 We stood and watched the waves crash on the shore for a while, then decided it would be good for us to walk all the way to the southern point. Shoes in hand, we took off tromping through the sand.  Our feet sank four inches into the sand where the surf had whipped it up, but left it looking smooth... like quicksand!  Good for the calves! 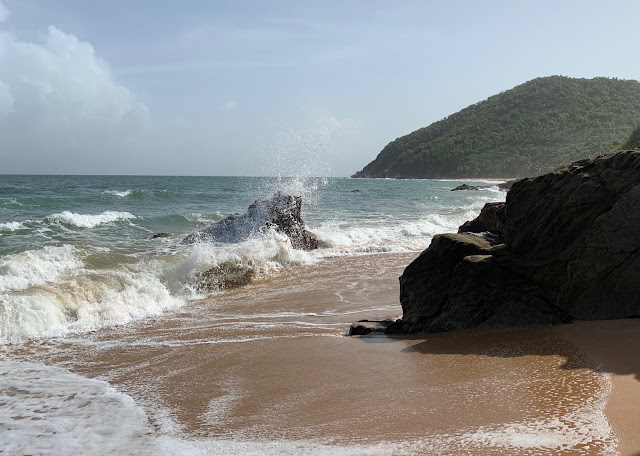 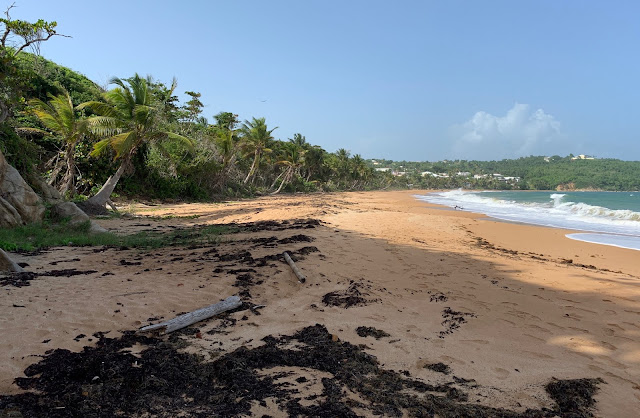 After spending a few minutes just gazing out at the surf, thinking our separate thoughts and feeling the sea spray on our faces, we headed back to the car.  You can see by the long shadows that the afternoon is progressing, and even with the walk, we were ready to crash!  What a marvellous addition to our list of places to show our future guests! 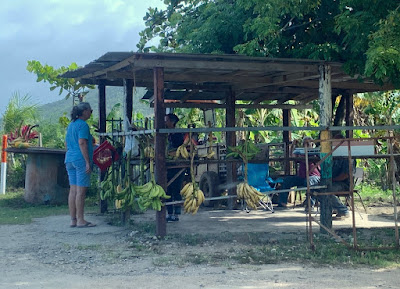 Once we rejoined the familiar road home along the east coast, we made one more stop.  There's a small stand out in front of what looks to be banana fields.  Guess they're plantains... because when I asked the lady if she had any guineos (ripe bananas).  Sadly she did not, only Plantains.

I've been doing a little research about these Chinchorreo Buses (party buses) here in Puerto Rico.  There are many vendors renting these out to groups of 10 to 30 people, and they come in many types, from luxury buses, to hacked up former school buses.  The fun ones are tricked out with chrome and flashing lights... and don't forget the sound system!

Party goers load up in the late morning or early afternoon, and the bus takes them along one of many Rutas de Chinchorreo across the island.  The bus stops at the small, unassuming little hole-in-the-wall  Chinchorros, where you can spend a short while sampling traditional Puerto Rican specialties, and maybe a cold beer, then load back onto the bus and do it all again at the next stop.  There is even dancing at many of the stops.  The busses run through the day and into the night!  I'm not sure that we have the stamina for that, but it sure is fun to watch the people having a good time... even when it brings us to a standstill on the mountain roads as we wait for the traffic to get around them! Maybe we can do our own Chinchorreo when guests come... as long as our guests are willing to give up their dietary inhibitions for a day! 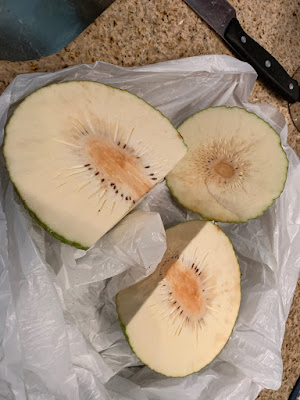 Eventually we made it home... there are many Chinchorros along our route!  We had one more thing to do before resting.  That breadfruit we bought at the Farmer's Market needed to be cooked.  Breadfruit doesn't last long once it's picked, so I grabbed a knife that I wouldn't mind losing (breadfruit have a sap that is difficult to remove from anything it touches), and cut it into small plank pieces.  I dipped each piece in egg, then rolled them in fine, seasoned cornmeal flour and fried them in safflower oil until golden and floating. 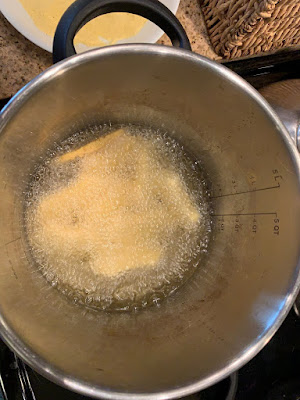 They made a wonderful shovel to use with the Doc's Garlic Salad that I made yesterday!  We normally serve it on crusty bread, but this was even better!

What better way to end a day than to eat from the land where we are fortunate enough to live?  It was a good day.  We found a new Farmer's Market, a new restaurant, a new mountain road route, and a new beach... all on a Saturday Ramble!  And in the end, Bruce thanked me for "Making him get out of the house!" 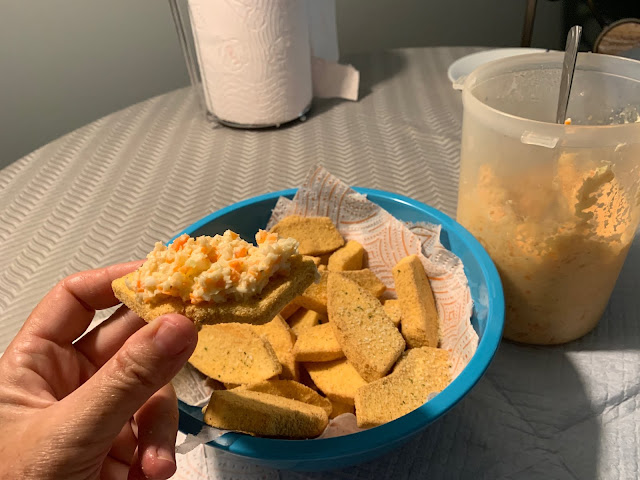