Maybe it's the new vitamins... or maybe it's just seeing so many places to visit on the Google Map!  Whatever it is, we seem to be making up for lost time after spending so many days working on getting the boat cleaned up and ready for sale!  All work and no play makes Dos Libras in Puerto Rico VERY CRANKY!

So, play it is! Thanks to Facebook, I get information about the many festivals that are held by the municipalities across the island.  I take special note of those within a short distance from us.  I put them on our calendar in case I wake up in the morning and get a wild hair!  Today's little festival was Festival de la Launcha Planúa in the seaside town of Humacao on the Island's east coast.  But there are LOTS of interesting places to stop along the way... so let me show you what we found! 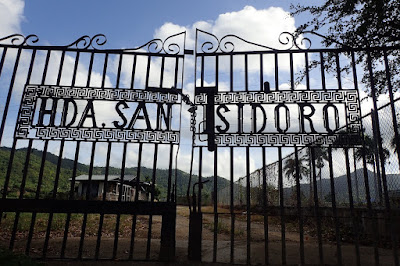 Hacienda San Isidoro:  This old plantation house has caught our eye many times as we've sped past on our way to someplace else... Today we stopped and tramped through the grass outside the gate trying to get a better look.  The mansion is just amazing.  It is ornate and HUGE and it looks to be in relatively good shape as ruins go.

There isn't much information that I can find on the internet about this place.  All I know is that it was an old sugar mill plantation and now it is owned by the Municipality of Patillas, PR.  There seems to be some evidence of recent activity in that it is well kept and the grounds are clean and mowed.  There might be some connection to horses but I wasn't able to get very far on that.  Maybe some of you know! 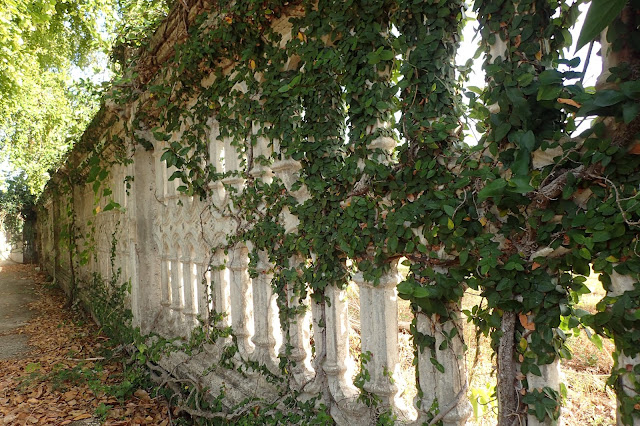 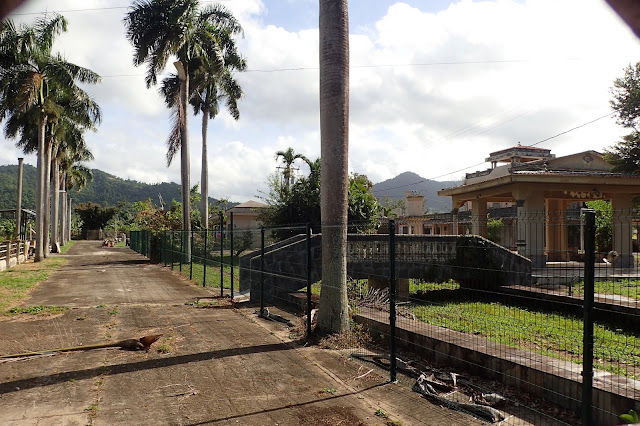 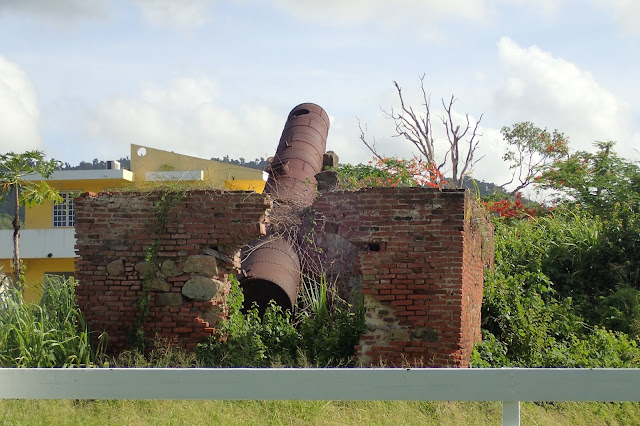 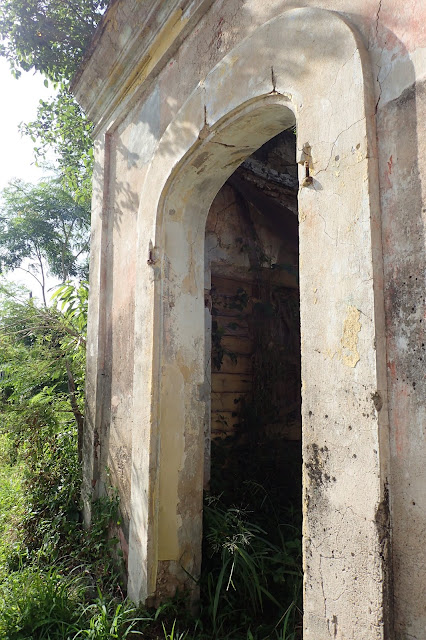 Remember this is a beach-hopping excursion!  We followed the coast road and stayed off the highways to see the views.  We didn't want to miss any little out-of-the-way places along the way! 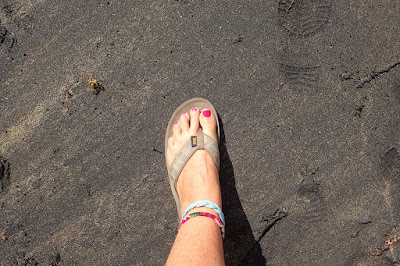 The first little beach on our stop-list was in the municipality of Maunabo.  It was very easy to get to, and had nice infrastructure for trash and recycling.  The beach was picture perfect and is reported to be home to turtles for nesting, so be careful!  The palms line the sandy beach and there is even a layer of black sand at the top of the tide line!

There wasn't a crowd so far by late Saturday morning, but I'm sure this one is popular!  The shade alone earns it a place on our list of places to revisit! 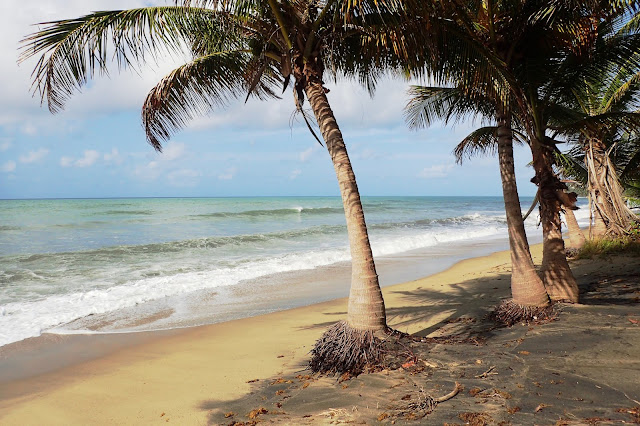 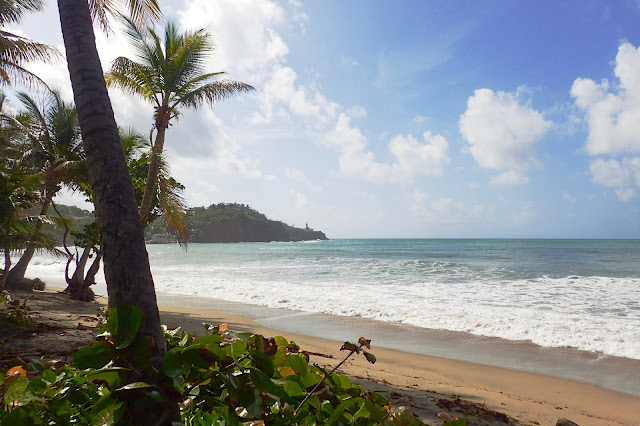 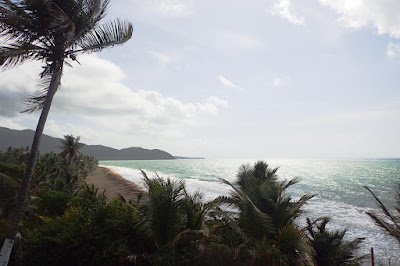 Faro Punta Tuna:  The Punta Tuna Lighthouse sits on a rocky point that juts into the Caribbean Sea along the curving southeast coast. First lit in 1893, the structure has been damaged by hurricanes and is currently being restored by the Municipality of Maunabo.  The drive along the coast road to get there is an attraction in itself, and then there is the beach below the lighthouse!  Jackpot!


The road that ultimately leads to the lighthouse is narrow and lined with modest homes.  The lighthouse grounds start at the cul-de-sac at the end of the street and there is uneven, paved parking for only maybe half a dozen cars.  I think the views are best in the morning and maybe the traffic is lighter too.  We got there before 11am and there were several cars, but room for us.  And the Limber stand was just opening up! 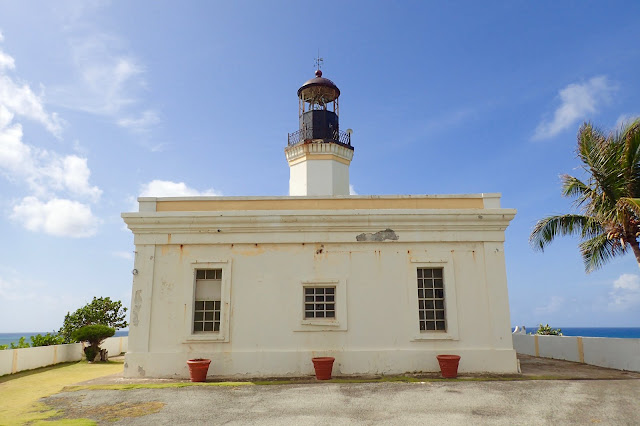 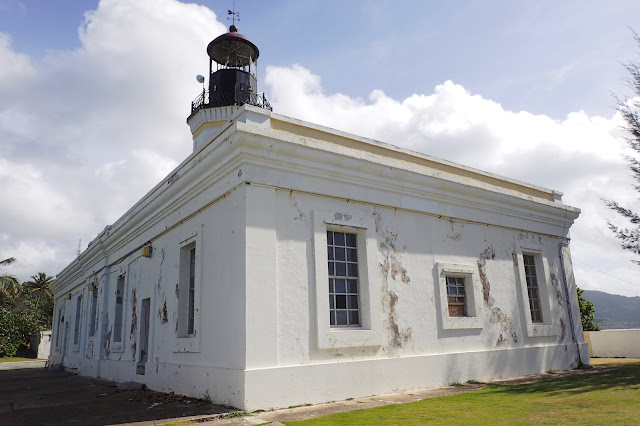 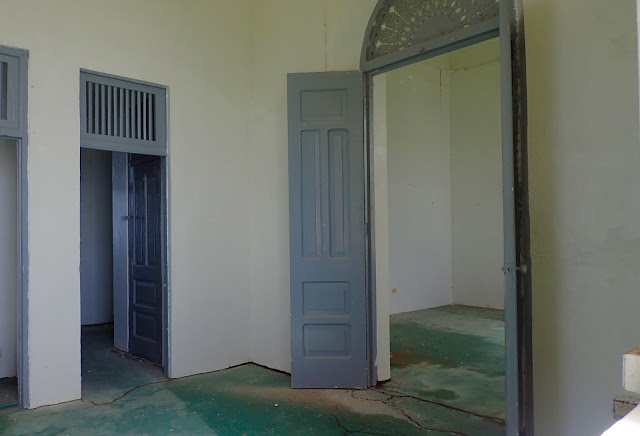 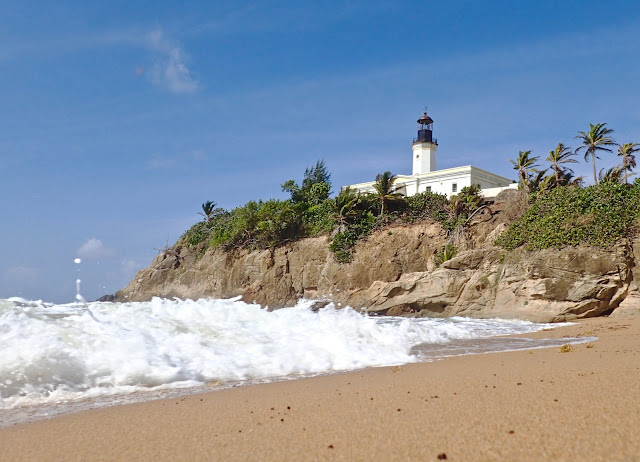 Playa Lucia: Lucia Beach in Yabacoa, is on the LONG stretch of eastern coastline and has more palm trees in one place than I've ever seen before in my life!  There is a small hotel at the southern end of the beach, and broken cement bike paths and sandy pathways wind their way through the palms to the many picnic shelters left barely standing by Hurricane Maria.  There is a public building that looks to have been maybe a restaurant, but it's difficult to tell in its current state of ruin.  Graffiti is everywhere on the building, but the only thing that marred the beauty of the beach is the increasing amount of seaweed that is washing ashore!  This place used to be awesome!  I hope the money to fix it is found eventually! 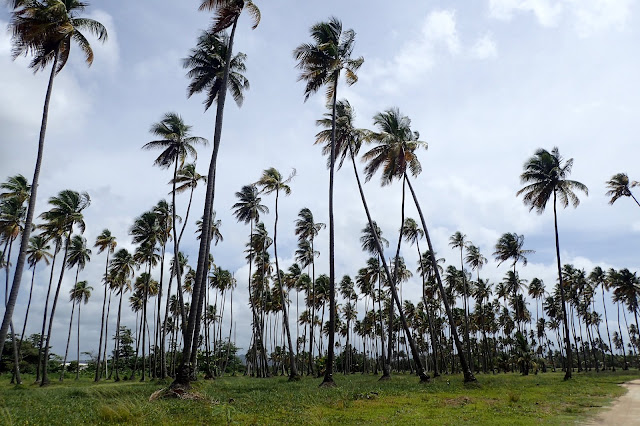 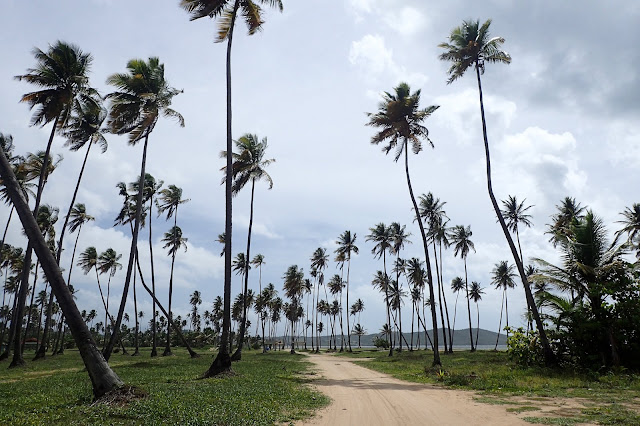 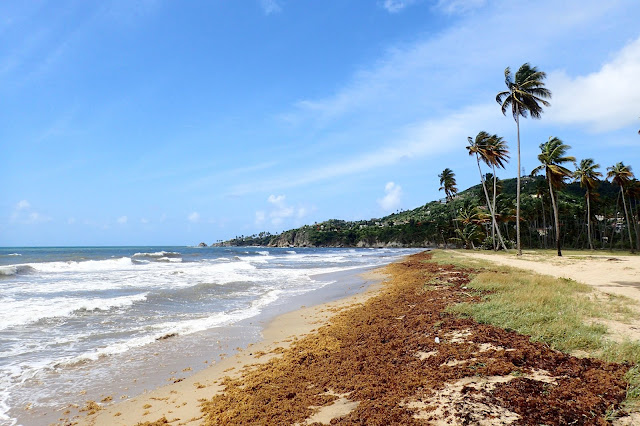 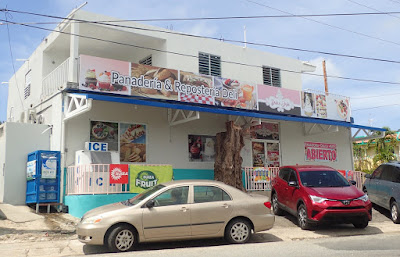 Dulce Artes: This day just keeps getting better and better!  The Limbers were creamy and delicious, but we were still getting really hungry by this time.  Just down the road we found a place that looked good... and we were right!  Panaderia & Reposteria Deli - Dulce Artes wasn't even on the Google Map... until now!  It's just the cutest little place and the Tripleta (we're becoming experts) was delicious!  They also have a nice assortment of pastries and desserts.  We were good.  We only chose one each to take away!  This one is on the LIST! 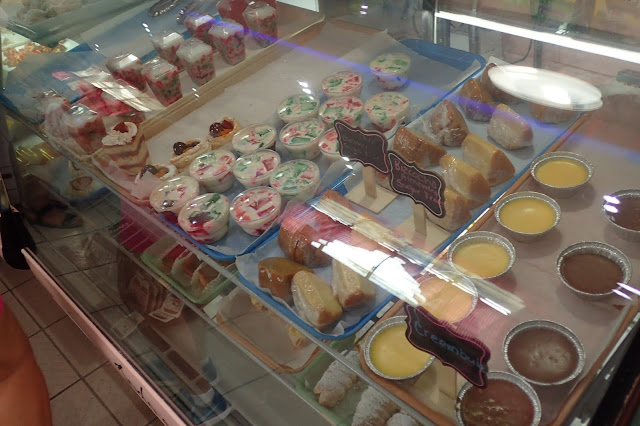 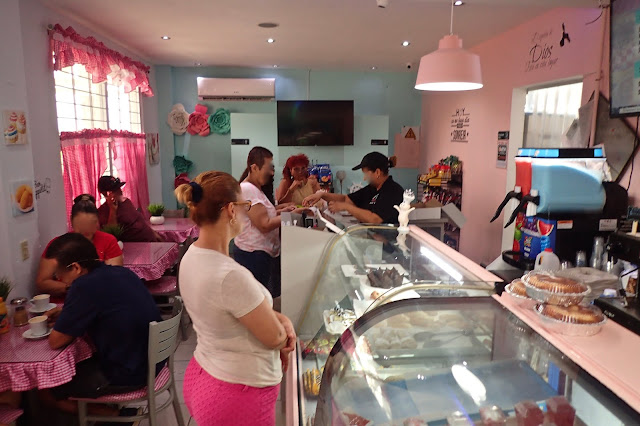 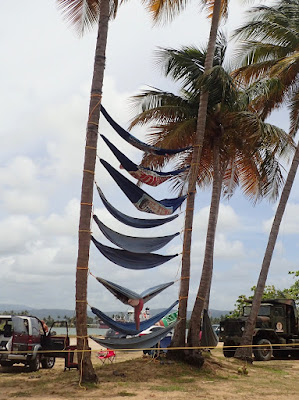 Yabucoa Harbor Boulevard:  From Lucia beach, we could have just gone right on down the sandy highway, but even with all wheel drive, I was not brave enough to try it, so we went the long way around (and found that awesome bakery). At the northern end of Lucia Beach, where the entrance to the industrial ship channel slices the beach in two, there can be found a nice little recreational area.  But the first thing that caught my eye was these two palm trees with multiple hammocks lined up, and Up, and UP between them!

The locals were happy to tell us about this place and one lady had a photo on her phone that showed these trees with twenty two hammock strung between them. There were kids swinging in most of these and I just marvelled at how they must have made it up all that way!  I love Puerto Ricans! 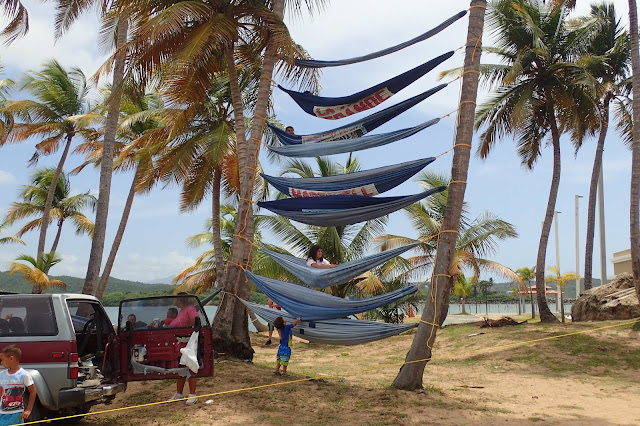 There is a stage area with plenty of room for chairs or dancing, kiosks for food sellers line the walk and there is a nice fountain for kids to play in, although it wasn't turned on today.  There would be music here tomorrow, but it's a little far for us to come back again so soon. 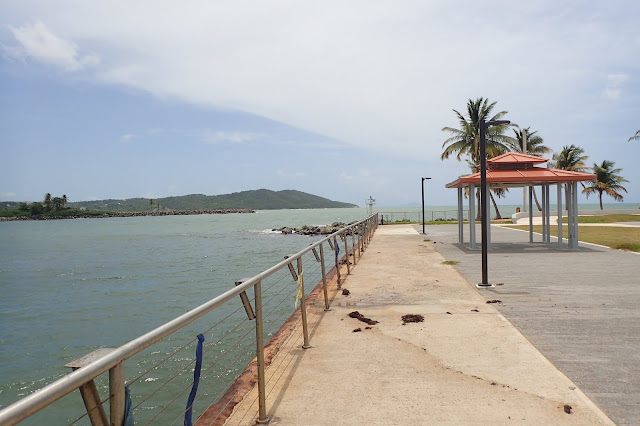 The channel that leads out to the Caribbean Sea is industrial and mostly oil tankers come here to bring oil for the local refinery.  There is a sea of oil storage tanks nearby.  We could see two tankers in port presently... but the best thing we saw, was this huge channel marker right up close and personal!  WOW I had no idea they were that big!  They don't look it when they're in the water!  I thought it would make a nice decoration for our poolside, but Bruce couldn't get it into the car! 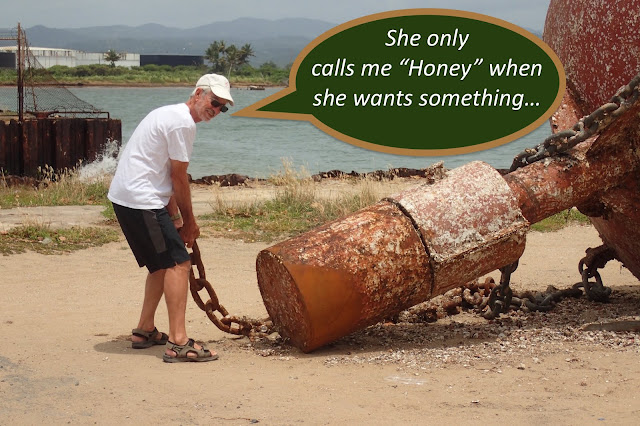 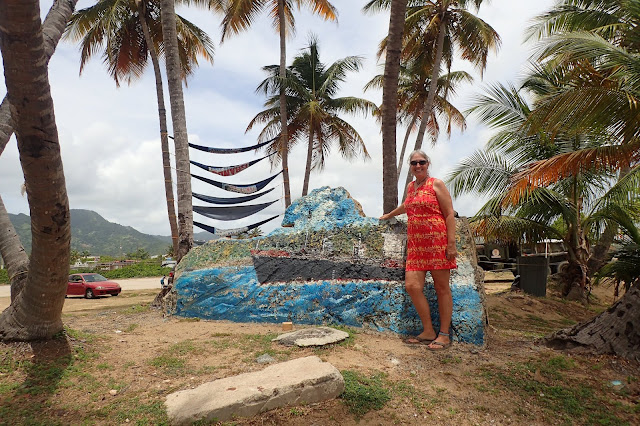 Festival de la Lancha Planúa in Humacao:  Finally we arrived to the place that was the actual destination for today's outing.  So many festivals, so little time!  By mid afternoon we were beginning to fade and it was getting HOT!  I looked at Bruce and could tell that he really wanted to turn toward home, but when I asked him, he agreed that we had come all of this way, we might as well take a stroll through the place.


The festival grounds were alive with colorful carnival rides and vendors, and there was a tent providing blessed shade for the artisans plying their wares. But the first thing I did was to drag Bruce to the ticket booth.  I wanted to ride the carnival rides!  I picked out two and we bought the tickets.  $1 each.  There wasn't much of a crowd in the heat of the afternoon, so we didn't have to wait to get on.  In hindsight, I should have let Bruce sit on the inside so that he would be pushed into me from the centrifugal force generated by the ride.  As it was, he probably won't walk right for a while after I squished his skinny butt for the duration of the very long ride.  I thought it was a hoot!  I think Bruce has a different opinion... 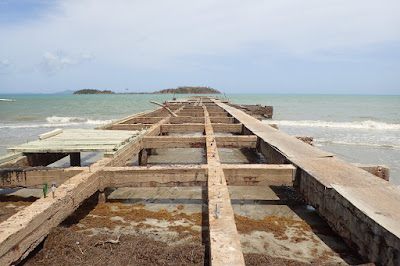 Trying to get the blood flowing through our bodies once more, we walked out to the Punta Santiago Pier.  It is terribly torn up from Maria.   We walked along the beach, the smell of drying seaweed strong in the air.


Looking out at nearby Santiago Island - known to the sailing community as Monkey Island.  We couldn't believe our eyes when we saw how bare it was!  Two years after the hurricane and the place looks like a brown sand dune with a few spindly twigs poking up.  When we were here in 2016, it was a lush forrest with tall trees for the monkeys that live there to swing in, and to provide them with shelter from the beating sun.  How can they live there now???  I hope the researchers are taking good care of them. 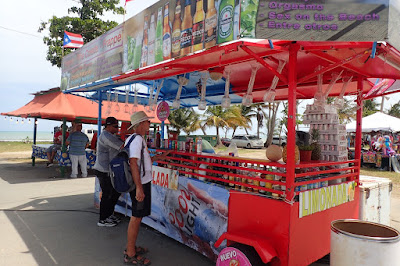 After checking out the beach, we drifted to the cool shade beneath the artisan tent.  I bought a little treasure to hang in our patio.  It's fun to be able to buy souvenirs again after living so long on the boat with limited space!  I resisted so many other things though, can't be greedy!  We picked up a huge Lemonada at one of the stands and suddenly we were done.  Our energy just drained out of us and we were ready to hit the highway toward home! 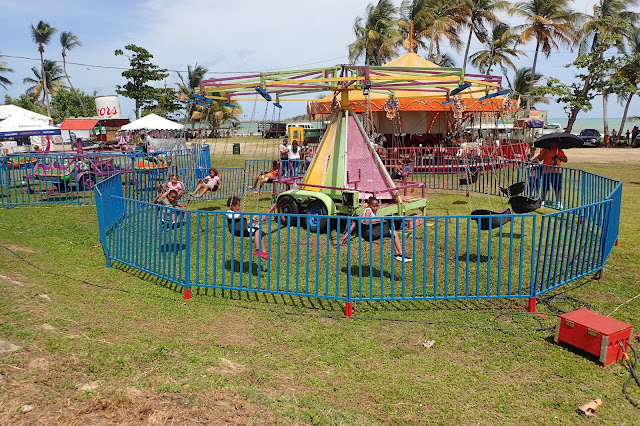 But we had two more ride tickets!  On our way to the car, we found a mamma with two young boys and I gave the tickets to her.  The transformation in that little boy when he realized that he was going to get another ride... well, it was worth the price of admission!  We watched as he got on the ride and his smile just made our day.  What a perfect ending to a wonderful day.  Every time we leave our condo, we fall more and more in love with this island and her people.  Come to Puerto Rico... and we'll take you Beach Hopping!