Holidays can be a bit subdued here in the Caribbean.  It's not that people don't celebrate, but more likely the lack of availability of all of the commercial accoutrements that we're used to in the States.  That isn't entirely bad, and it sure didn't stop a group of Cruiser Moms from making sure that their Boat-Kids had a great Halloween here in Prickly Bay! 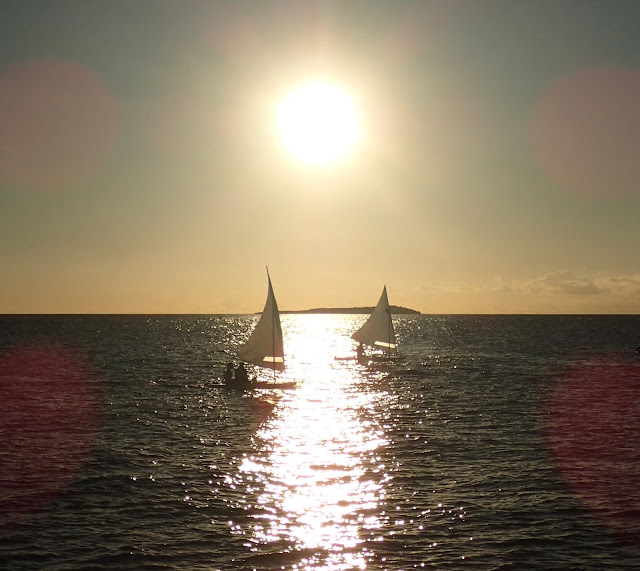 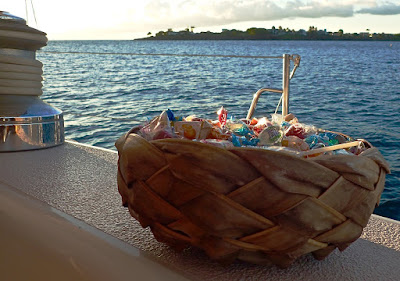 The festivities were announced on the morning Net well in advance to give everyone time to stock up and prepare. Bruce and I haven't had a Trick-or-Treater since moving onto the boat and we were super excited about this! Candy is pricey here, but we had a guest arriving shortly before Halloween! He agreed to bring us a couple of bags of Halloween candy from the States so were ready! Boats in the Bay were to raise their yellow Quarantine flag if they had candy or other treats to give out.  The parents made sure to notify the local Coasties so that the appearance of dozens of Q-flags wouldn't cause an international incident!  Good thinking Boat Moms!

The kids gathered on nearby Calabash Beach by mid-afternoon to share makeup and ideas and get themselves ready.  Boat-Kids from the other bays arrived on the beach by land to join the Prickly kids in their dinghies, and shortly before sunset they were off! 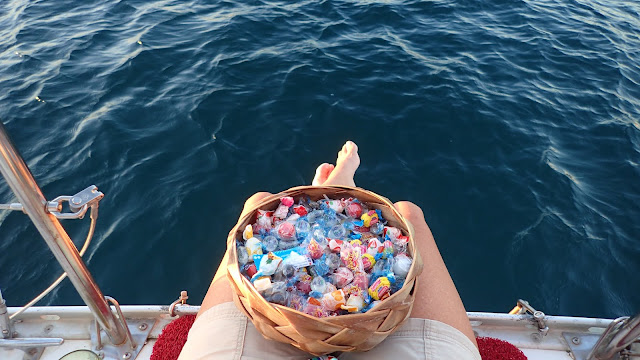 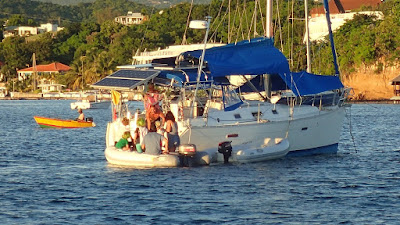 We sat patiently waiting and watched as the dinghies spread out across the anchorage.  They seemed to have different strategies of attack! 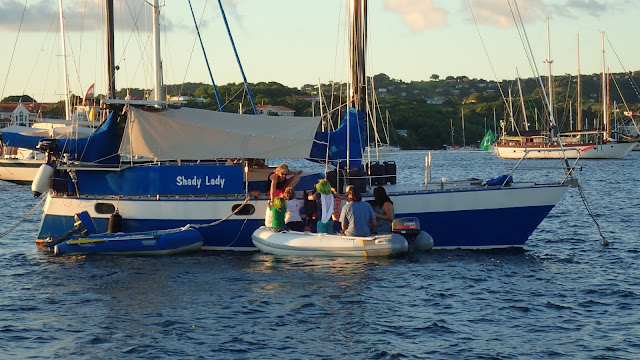 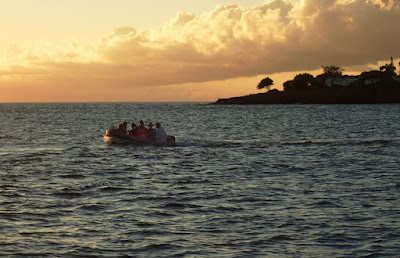 Some sped out to the far reaches of the Bay where we were anchored, while others methodically picked off the boats one-by-one, beginning with those closest to the beach.  It certainly made it more manageable for us to have them spaced out! 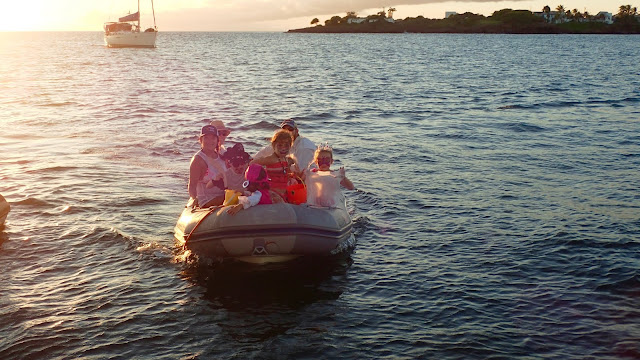 They arrived by the dinghy-load, holding out their makeshift bags and baskets with their little faces upturned and hopeful. 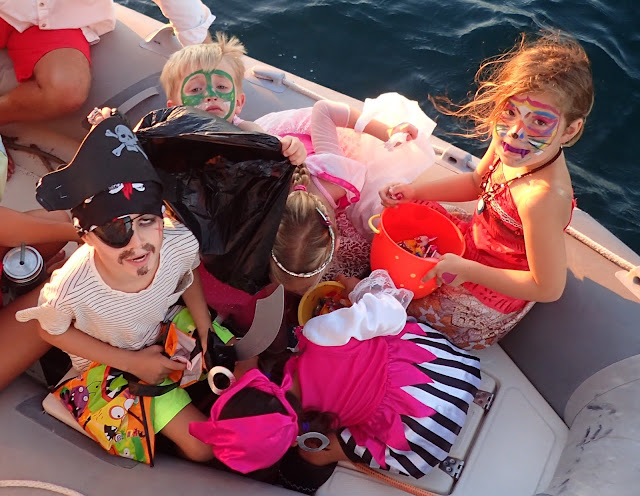 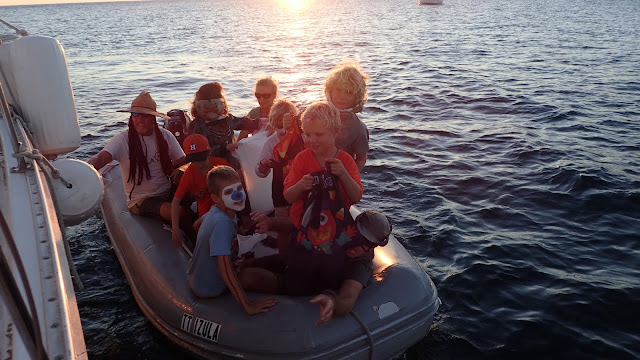 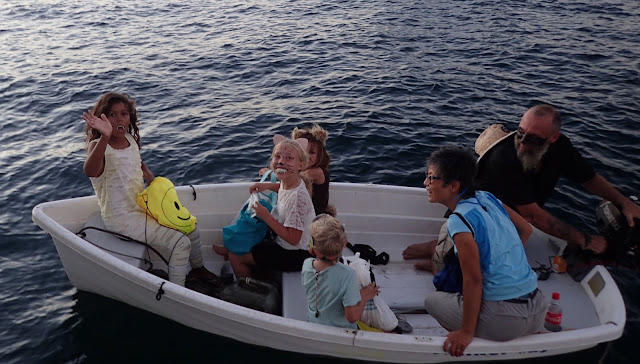 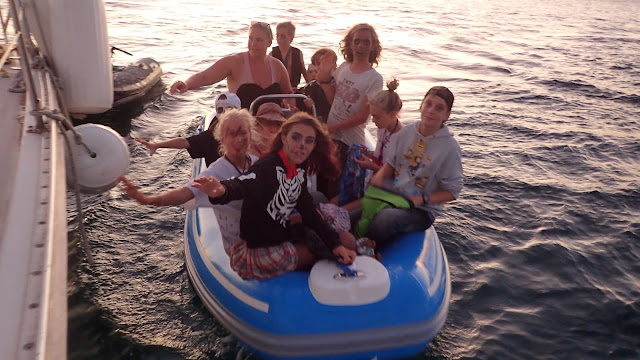 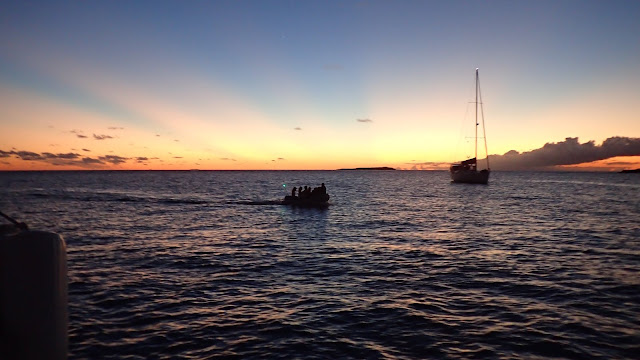 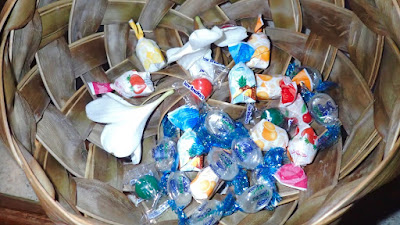 I heard someone say that there were nearly 60 kids participating in this event.  What a great turnout!  I'm SO glad we bought those extra couple of bags of candy or we would have run out way too soon!

The kids didn't just go out and buy a costume.  They had to gather whatever bits and pieces they could to make their own.  Our expectations were far exceeded!

What fun to be able to do something "normal" but with an Island flair!