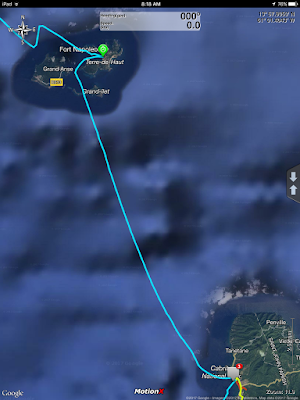 We left Les Saintes mid-morning to travel the slightly more than 20 nautical miles to the island of Dominica.  We were excited to finally be headed toward one of the top destinations on our Bucket List!  Who doesn't want to go to Dominica???? Nobody!  It's on everyone's list of favorite islands so our expectations are high!

We had the perfect forecast, winds in the 15 knot range from slightly north of east, and seas 5 ft or less...  Bruce prepared to raise sails as we motored out between Les Saintes and immediately found the big water!  We were ready and set our sails, settling in nicely for a beautiful ride. 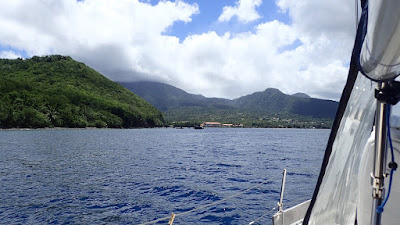 We were on a fast and thrilling magic carpet ride but conditions  moderated quickly in the lee of the island.  We started the engine and dropped sails -  the engine has given us no more trouble since Bruce cleared out the fuel vent... It started right up and we motored into Prince Rupert Bay. 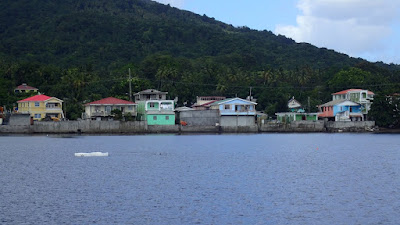 It was early afternoon and we were looking forward to the ease of having the PAYS Boat-Boys usher us onto one of their secure moorings and give us the scoop on how to stay out of trouble and make the most of our stay here in Dominica.  In English even!!!


Warnings about renegade Boat-Boys were fresh in our minds as we spied a long boat speeding toward us before we even made it into Prince Rupert Bay... We effectively fended him off (well, sort of effectively... it wasn't easy to convince him to leave us alone, and when he left, he was mumbling unpleasantly) and proceeded to the northern end of the bay where we were NOT approached by another boat...

Where are they?  Why aren't they coming out to greet us???  It didn't look like there were any sort of proper mooring balls in the Bay... plenty of boats anchored on this end... We motored slowly along the shore looking for any sign of a friendly PAYS boat headed our way.

Then we saw Alexis!  Things were looking up!  He led us to a mooring and helped us get our lines secured... Then he welcomed us to Dominica and pointed in the direction of the Customs & Immigration building and said he would come back tomorrow, after we were settled in. 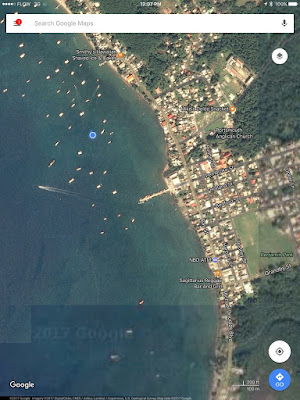 We asked Alexis if we needed to go to PAYS and register and pay for the mooring but he told us that they had removed all of the PAYS moorings and were in the process of replacing them with new ones during this, the low season.

OK, so this was not one of the PAYS moorings... That explains why it looks so ratty.  We were a little bit confused, but this guy seems like he knows what he's doing, so we're rolling with it.

After rescuing our spinnaker halyard from being sucked into the mast (don't ask) we transferred the dinghy from the deck to the water.  It was already about 4pm and we were sure to be charged an after hours fee for clearing in at this time of day... But it couldn't be helped... we set out in search of the Customs & Immigration office.

We dinghied over to the Fisherman's Dock where we thought Alexis had waved us. (turns out there is another dock further up the beach and very close to C&I)  A fisherman gave us a hand up... Other than the one guy on a surfboard trying to sell us ugly fruit, the people have been very nice.  We secured the dinghy and set off on foot through town. 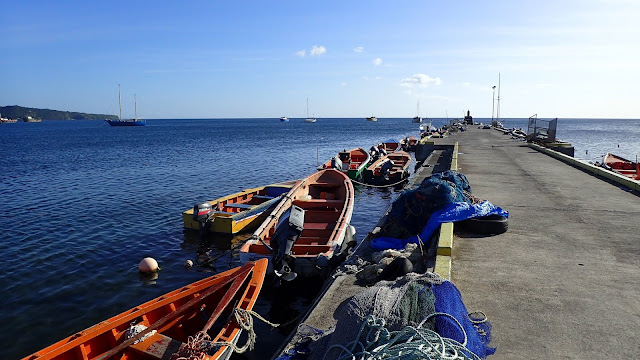 My eyes quickly grew accustomed to the overall shabby-ness of the place as I made the mental adjustment to my new reality.

That's something that needs explanation, if I can...  Each place we stop is in many ways similar to others, but in so many other ways, unique.  We always have preconceived notions about a place that we have to deal with when presented with the reality.  So there is always a period of mental adjustment between the images in our mind's eye... and what we actually see upon arrival. 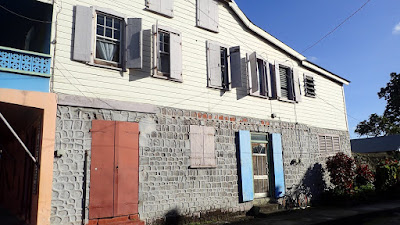 I think I expected more of a town than this messy, colourful, shabby-but-clean, little strip of life alongside a long grey stretch of wave-lapped sand.  There are tiny grocery markets, rustic eateries offering unfamiliar foods,  hardware stores with a smattering of random gadgets, one NAPA auto parts store with essentials on display..., clothing stores and homes with tiny porches in front where their inhabitants lime away the late afternoon hours in cool shade. 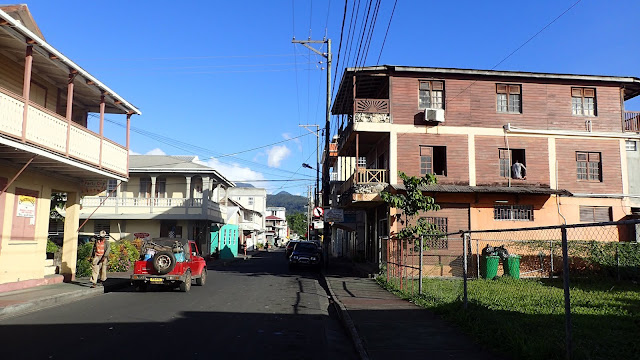 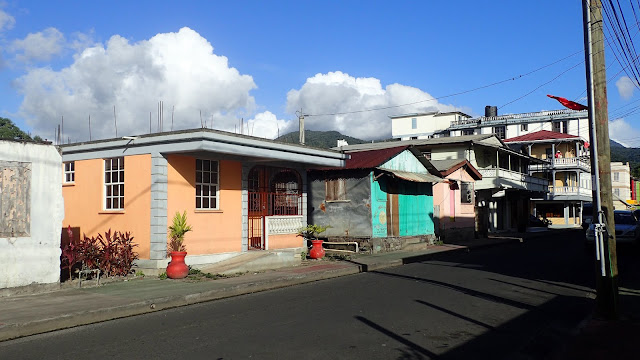 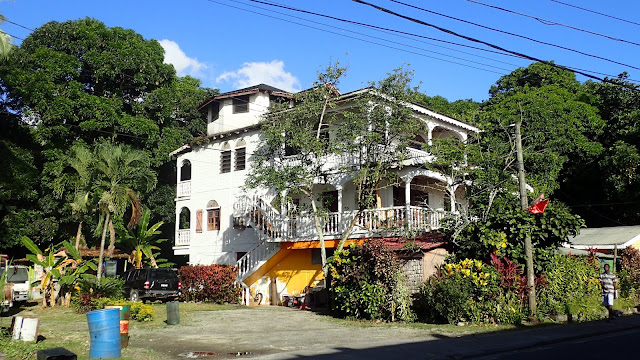 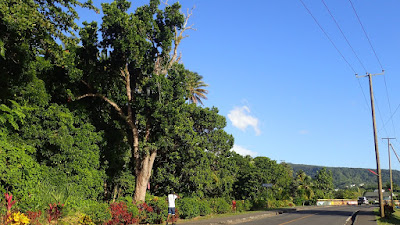 We didn't hear the sound of a single TV and nobody had their face glued to a smart-phone screen...  People were walking and riding bikes and the vehicular traffic was light and sluggish as cars and small trucks wound their way through a maze of obstacles.  Just behind the row of buildings to our right was the sand and the Bay, sparkling in the lowering sun. 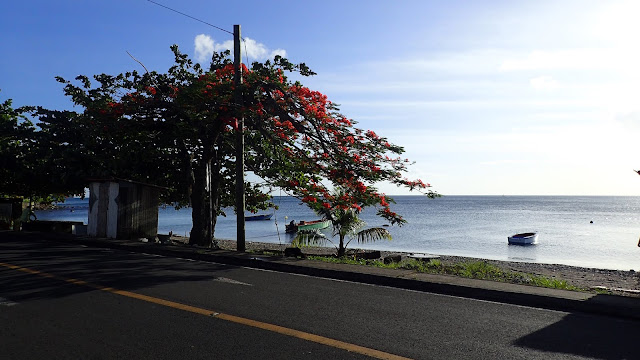 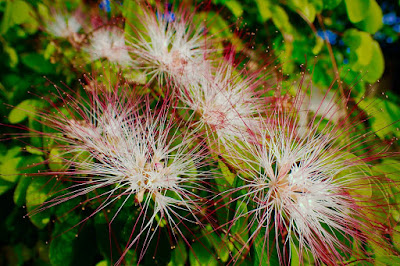 I breathed it in.  The smell of forrest and smoke.  Clean and dirty together.  There's nothing like it and each island has its own, distinct scent... 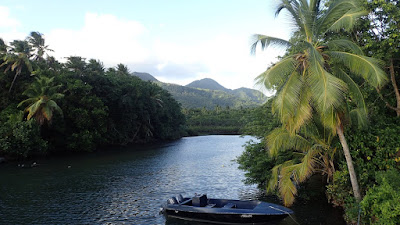 There are some 365 rivers on the island and we crossed the bridge over one of the majors... the Indian River...  The mouth feeds right into the bay and we peered upstream at a scene right out of "The African Queen".  The ribbon of green water disappeared around a bend with banks burgeoning with giant ferns and strange trees... the mountains in the background misted at the top by low, grey clouds... tantalising and mysterious... We can't wait for our Indian River Tour!!! 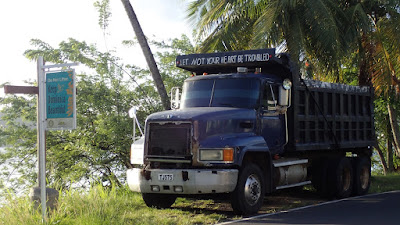 When we walked so far we though surely we had missed it... we asked a painfully thin, dreadlocked guy on a bicycle where was the Customs office... He pointed ahead and took off in that direction on his bike.  Soon we arrived at some small condos where Skinny-Dreadlock pointed the way.  The Customs Officers weren't in their regular office.  After hours and weekends they work out of "the residence".

We were happy to see other late-comers ahead of us just finishing up and our worries that we would have walked all this way to find them closed disappeared!

The fact that I prepared in advance by completing the online clearance form using Sailclear - the guide book assured me that this island used the service and that it would save a ton of work - did nothing for me when I was handed the paper forms...  The Officer said they don't use Sailclear here... Oh well, this is the third time I've tried to do our clearance online... and the third fail... so if you're coming this way... skip it!  Just do the paperwork, in triplicate, using antiquated carbon paper sheets!  OMG so much of what I've read has been inaccurate!!!

We paid $30 US for the privilege of clearing in after hours... I don't know how much of that was extra but it wasn't the $50 US extra the guide book prepared us for...  So the inaccuracies aren't always a bad thing...  But then we had read that you could request a coastwise pass which allows travel to the Capital city of Roseau when clearing in here... but they wouldn't let us have one.  They said we have to come back and get clearance to either Roseau or out of the country when we were ready to go.  But, it wouldn't cost anything but our time... as long as it was during normal working hours... 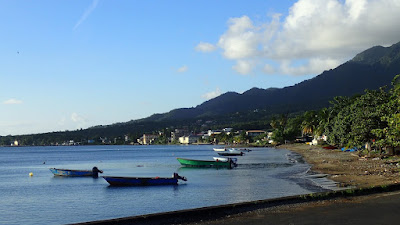 On our way back through town, we were accosted once again by Skinny-Dreadlock-Guy... He asked if we wanted to buy any fruits... no... how about some ganja... NO...  well, then could we just give him some money then????  NO!!!  At least he didn't give us the voodoo glare as he peddled away... He said "No Worries!  Enjoy the island!".  Maybe we should be really worried... 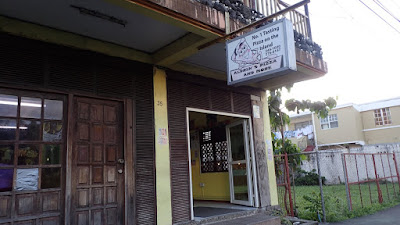 We shook it off as we enjoyed the walk and the flowers and the scents of unidentified foods wafting through doorways... Bruce was set on Pizza for dinner and we found a little place advertising the BEST pizza...

It was a very basic place with several pizzas offered by-the-slice... We picked out one that looked good... until the girl told us that it was hot dog pizza.  Um... better give us two waters and the pepperoni then!  We ate our pizza and I decided that if they were serving hot dog pizza, it must be good... so I picked up one slice of hot dog and another of veggie pizza to go.  We carried these back to the boat and had them with our sundowner...  Yep... it was weenie pizza!  That's all I'll say!

The anchorage is blessedly flat.  I've heard that it can be rolly, but so far we've had wind funnelling down from the mountains making it nice and cool, but no fetch and no swell.  Jezabelle is catching up on lost sleep from our recent anchorages and passages between islands... 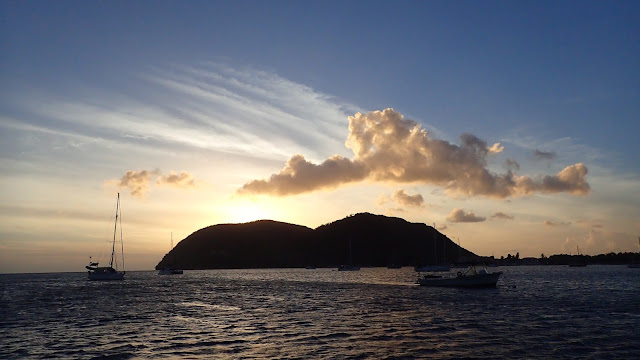 We are growing accustomed to the smell of wood fires from the beach and cooking over open fire from some of the homes ashore... Guess we'll bear the scent of this island with us when we leave...By now we kinda like it.  We're HERE!  We're settling in and we have adventures to look forward to on the beautiful and mysterious island of Dominica!