Love 'em or hate 'em... when I was researching the many different brands of full face snorkeling masks out there I found that the reviews were as polarized as they are about politics and anchors!  Some people love them and others hate them.

I found that the haters all sounded like hard core types who don't consider that there are people in this world who just want to float around on top of the water and gaze at the scenery below without ever diving deeper than a few feet from the surface.  For those people... give the Tribord a pass.  But for the others... people like me... this is what you've been waiting for!

We'd already had an opportunity to handle one of these masks ourselves when a nice woman rose from the waves pulling one off of her face one afternoon while we were walking the beach on Culebrita.

That planted the seed... but after speaking to my Dive-Master-Brother about it... I was not ready to commit.  He said that we wouldn't be able to dive beneath the surface because it would be impossible to clear our ears... and for that reason alone we shouldn't buy them.  So I waited.  And I mulled it over. 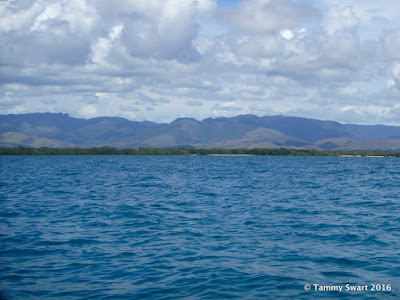 Some weeks later a Facebook friend posted a comment about hers and how much she loved it.  After questioning her extensively and watching the video on the Tribord Easybreath website... I was sold!  I went online to Amazon, read lots of reviews and found several videos that answered that one nagging question about diving below the surface... And then I ordered two... a pink one for me, and a blue one for Bruce!

I will admit... some of the negative reviews got to my subconscious and actually gave me nightmares while I waited for our masks to arrive.  It would be a pain in the butt to have to return these things and I really wanted them to work.

Finally they arrived and we ripped open the boxes and tried the masks on.  They felt really funny but seemed to be made well.


I remembered several of the reviews mentioning that they received "used" masks that had sand on them... I inspected both very thoroughly and found them to be in pristine condition.  Well that's one nightmare shot down by the light of day!

We wore the masks for a little while to see if we felt any restrictions or if they had any sign that the breath we expelled wasn't exiting the mask sufficiently like some of the reviews said... nope.  They seem fine.  I was a little worried that I had ordered mine too large because I could feel air flowing out the mask up around my forehead when I blew out rapidly... I hoped that it wouldn't leak.  Maybe the force of the water will push the mask closer to my face to make a better seal...  Maybe I should tighten the elastic straps...  A full two days passed before we had our chance to go out and give them a try! 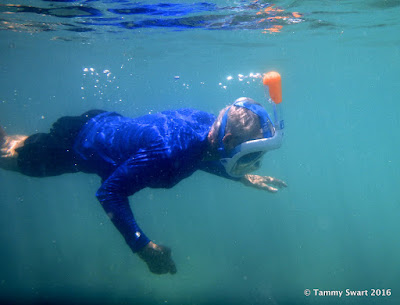 The winds were down today so we got the outboard going and motored slowly out of the protected waters of our little bay.  We were looking for just the right spot, someplace with no big waves and good visibility...  There was a lot of boat traffic with this being Sunday... but we found a spot on the eastern end of Cayo Matias and threw out the anchor.

Within seconds Bruce was in the water and swimming away as I watched anxiously for signs of sputtering or choking... All GOOD! 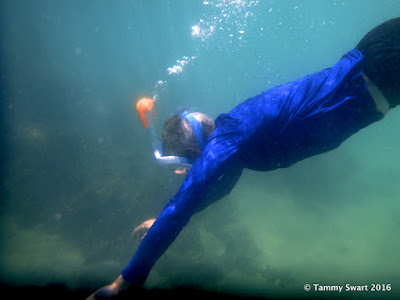 I pulled the elastic a little bit tighter on my mask and put it on.  One tiny irritation:  the elastic runs up the center of the head which is right where my ponytail is... Not a big deal, but if this is a review, it is worth mentioning.  Otherwise, the mask feels very comfortable.

I joined Bruce in the water and asked him if he could swim beneath the surface with the mask on.  He immediately proved to me that not only could he do that... but he could also dive down to the bottom... some six feet or so... with very little noticeable difference between this mask and the traditional kind. 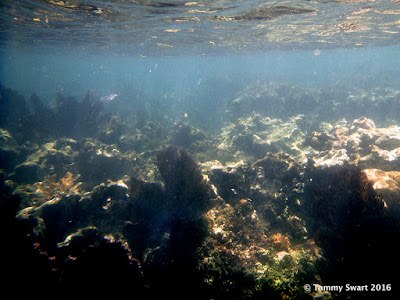 With two thumbs up... off we went to see the sights! 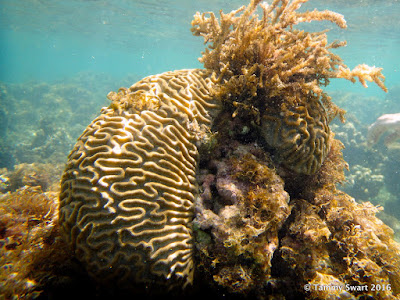 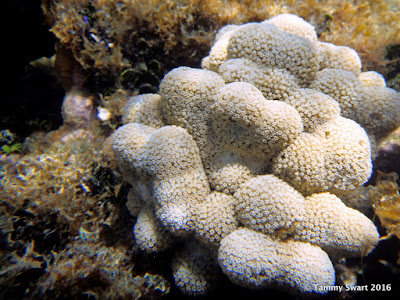 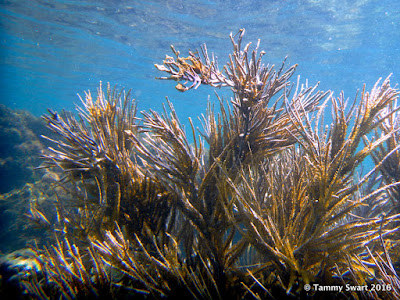 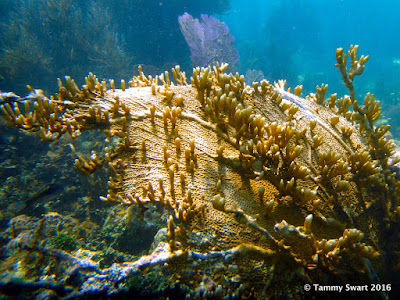 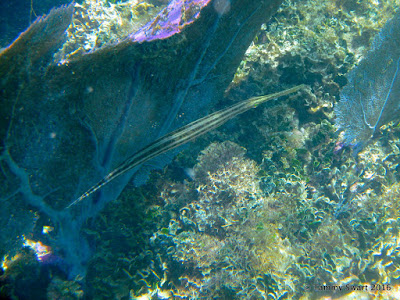 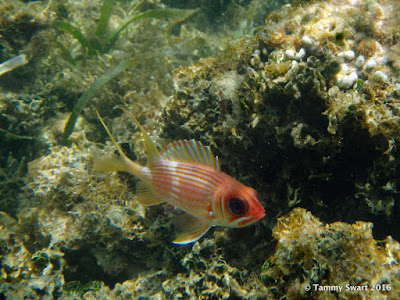 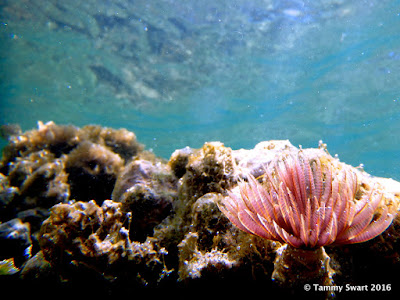 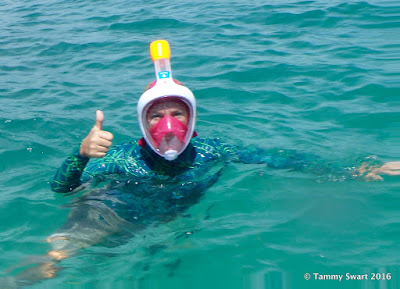 The visibility wasn't the greatest... but that wasn't Tribords fault!  In fact, I think this mask greatly improved our experience.  Snorkeling here would have been dismal with foggy vision further decreasing visibility with a traditional mask.  After a very brief adjustment period we both just swam along marveling at how comfortable the mask is.

I have always had a problem finding a mask that would accommodate my nose.  It's big.  AND since having a deviated septum surgically altered some years ago, my nose can not tolerate any type of pressure.  The discomfort I normally feel where the snorkel mouthpiece pushes up against the mask beneath my nose is usually what ends our snorkeling.  I just can't take it for very long.  Today... I felt ZERO discomfort in my nose OR mouth.  The awful mouthpiece I'm used to wearing while snorkeling is a distant memory...

I happily paddled along in disbelief!  I can breath through my NOSE!  I don't have to breath through my mouth anymore.  No more will I struggle with a throat so dry I can't even swallow!  I can swallow all I want!  I can even burp!

Unfortunately Bruce can NOT understand me when I speak to him wearing the mask under water... But then maybe he's faking that.

There were some strange sounds that were a little disconcerting at first.  They seemed to correspond with my breathing so I assume the sound is caused by the air traveling up through the sides of the mask and maybe the little mechanism inside the snorkel.  I got used to it quickly and it wasn't a big deal.

After snorkeling for some time, I began to feel the pressure of the mask on my face between my cheekbones and nose.  The one remotely negative thing I can say about the Tribord is that it left warpaint-like red marks on my cheeks from the way the mask fit my face... This might be different for other people, but Bruce experienced the same thing.  But I would gladly trade the pressure I'm used to feeling from snorkel and mask for this small amount of discomfort... in a heartbeat!

Bruce was already in the dinghy when I returned and I asked him what he thought.  I can't remember the last time I've heard this much enthusiasm in his voice over anything!  He was ecstatic.  He said he would never use the old type of mask again!

He did say that he had a small amount of water leak in, but he has a beard and the seal on the mask isn't as good as mine... But then he was also a lot more active than me... and it was still less leakage than he gets with a traditional mask.  He said that he accidentally tipped his head too far down and submerged the snorkel and it simply closed up... When he brought his head back up it immediately drained and he was able to breath again.

We both agreed that keeping our faces dry and having absolutely no salt water in our mouths is the best part! 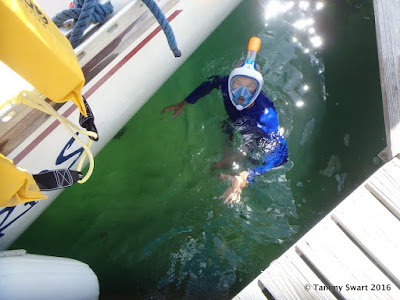 The final test will be to see if Bruce can use this mask to clean the boat bottom...  Reviews mentioned that the increased amount of air inside the mask creates additional buoyancy which can limit your ability to remain underwater for long.  When Bruce does the bottom, he usually wears a light weight belt... but we will see... 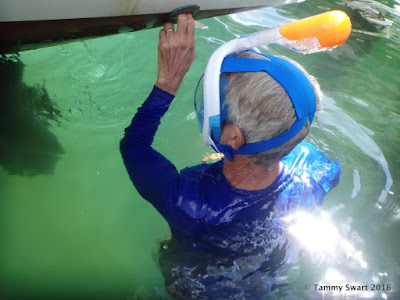 While I washed my gear he gave it a try...  He said that he did have a bit of trouble staying down and that he had hit the snorkel on the bottom of the boat causing water to leak in.. So maybe he will have to use the traditional style mask again after all...  But since he usually uses the hookah-type compressor and regulator, he was going to do that anyway.

We can't be happier with our new toys and we wish we had bought them sooner!  If you aren't an avid skindiver and are happy with remaining relatively near the surface, we think you will love the Tribord Easybreath!

We have no affiliation with the Tribord Easybreath... we are just happy users!