Dos Libras sleeps quietly in rain drenched heat back in Gulfport, FL while we zoom across the entire US of A in our car.  By sea and now by land, we are packing in the sights, sounds and smells of our great (and by that I mean great BIG) country.

The trek from Florida to Texas has now become more commonplace for us, as we've made it several times... One stop in Baton Rouge at the La Quinta (they allow pets at no extra charge) and we were off again, arriving at our Townhouse in Corpus Christi by late afternoon.  And that was even with a side trip to Aransas Pass to pick up some fresh Gulf Shrimp to assuage our craving.

You just can't get shrimp like these anywhere else and we've been pining for them...

Next stop was "home".  I use quotes because it doesn't feel like home anymore.  Home is where our boat is.  It's the strangest feeling and is completely indescribable.  We walk through the halls and rooms of the townhouse that we bought, remodeled and decorated in our own eclectic style... we see familiar things, treasures we once highly valued... but now there are also things not ours there.  My mother is living in our town home and paying the expenses so that we can cruise without the expense of keeping the house.  It's a win-win for everyone. 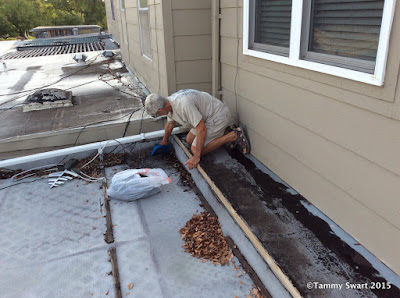 She had a few things listed for us to take care of during our brief visit... like clean the leaves that collect on top of the atrium for starters...

So between visiting our friends at BYC and lunches and dinners with other cherished friends... and dinners with family (Mom fried up those delicious shrimp as only she can do)... we did a few chores.

Well, I guess we are still technically homeowners, guess that qualifies us for "house projects".

Bruce and I both had medical visits while we were in CC.  Yes, there are Doctors everywhere, but if we have the chance, we still like to see our long-time physicians and dentists. 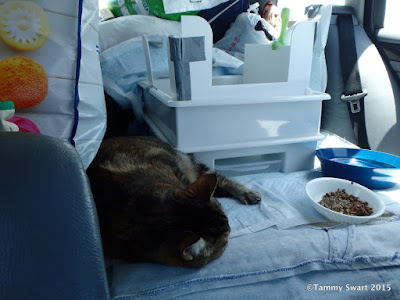 And so, with all of that out of the way, we were ready to continue on our journey across the country... but sadly, with only one fur baby.

It isn't written in stone yet as we are still having wavering moments... but when Mom heard us talking about our Jetsam aging and how it's becoming increasingly difficult for her being on the boat... she volunteered to keep her at home.

Our initial reaction was NO WAY!  We can't leave our baby!  But when we started to think about it, Jetsam really seemed to remember the townhouse and settled right in, we began to reconsider.  Granted, we were now sleeping in the guest room and she was no longer welcome in the master, where Mom and HER cats are now living...  She still seems so comfortable in the house.  We tell ourselves that it will be an easier life for her in her declining years than sailing off into the unknown.

The sad day of our departure leaving our Jetsam there and driving away with only Jezabelle was tough.  If we can't stand it, we can always swing back by Texas on our way back to Florida and snatch her back...  But we keep telling ourselves that it really is what's best for her as her growing physical ailments manifest in so many ways, maybe it is best for her to be in a place she knows and can be more comfortable.  I just hope she adjusts quickly and doesn't miss us as much as we miss her snuggles. 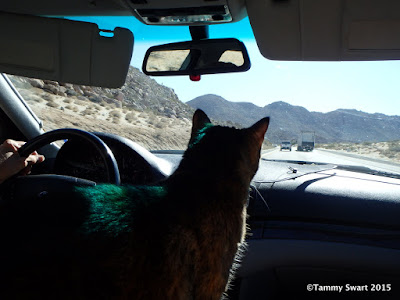 If Jezabelle misses Jetsam at all, it isn't evident to us. She has been such an awesome traveller we really count ourselves lucky.  She has become so comfortable in the car, and equally comfortable in the places we have stopped. She's just taking it all in.  It is only mildly inconvenient that we can't stop spontaneously and check things out because we can't leave her in the car... but that's OK, we love her. 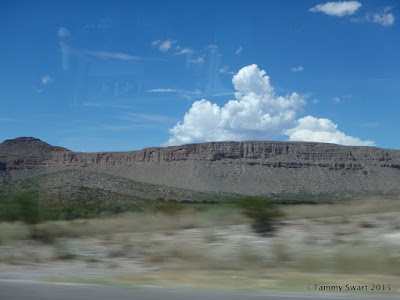 Things began to change drastically as we left the familiar parts of Texas and headed West.  The terrain was vast and dry at first glance.  The land was punctuated by uprising hills and rocky cliffs.

We were surprised that the plant life present was so green. 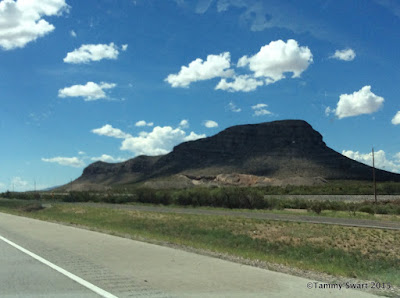 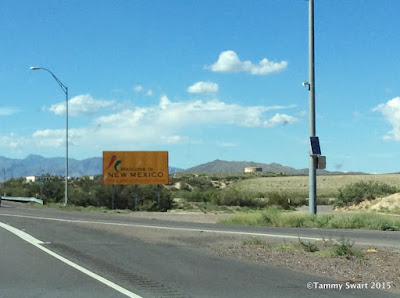 Once out of Texas, things went more quickly as we zoomed along.  Temperatures began to climb as we made our way towards Deming, NM, where Bruce's brother and his wife have graciously extended an invitation for us to stay in their home for the night.

Our day was long, traveling 11 and a half hours so that the next day would be shorter, giving us time to visit with Phil. 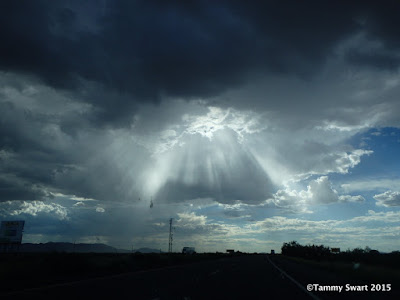 We were relaxed and refreshed as we hit the road again late the next morning.

I enjoyed seeing the dust devils spin out on the plains, very different trade from the possible waterspouts we left behind in Florida.

We approached a huge raincloud and felt the momentary respite from the heat as a few fat raindrops splattered across our windshield, cleaning the dust from our view.  We were treated to quite a dramatic landscape as we drove through the rain.

I was fascinated by the sudden lift of the land to soaring heights and enjoyed playing with the aerial Google view to see what the places we were driving through looked like from above. 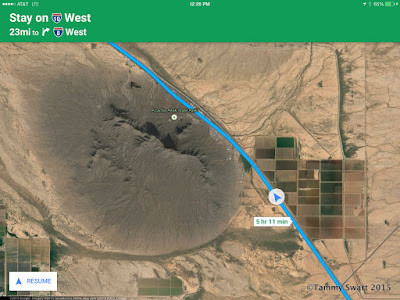 Cities were few and far between as we sped West.  The speed limit was 80-85 and we marveled at the number of traffic cops we saw waiting to catch speeders.  WHO would WANT to drive any faster than 85mph???

We are used to signs out on the water, but you never see a sign that says "High winds next 49 miles" or "Dust storms possible next 49 miles"...  These are things that I've never seen before and were of high interest as I peered out the window in search of said dust storms... 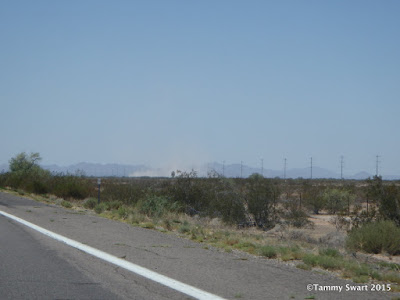 But the winds were not bad and all we saw were the dust devils, which are evidently as camera shy as dolphin.. it's hard to get one in a picture from a moving car.

Driving along I10 West, the traffic was steady but since everyone was going the same way at that breakneck speed, it didn't seem like much.  We saw SO many 18 wheelers carrying goods West... and just off the highway I was delighted to see - TRAINS-! 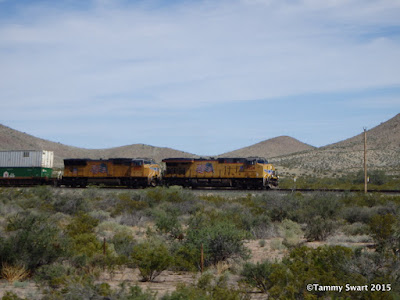 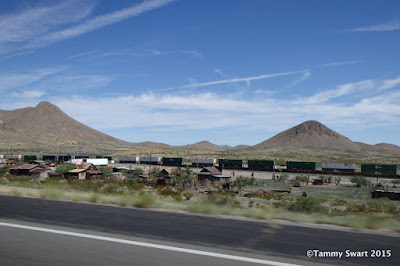 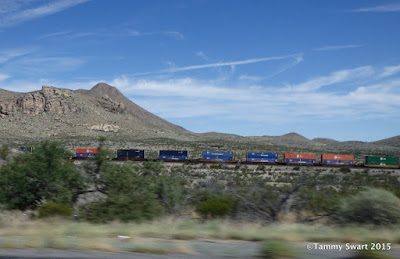 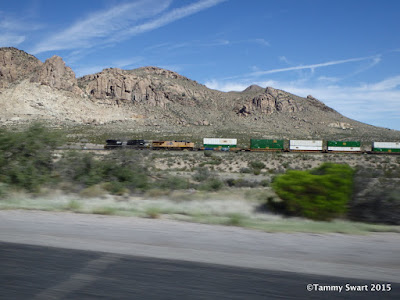 I love trains.  There is a lot of stuff being moved to and fro out here in the desert. 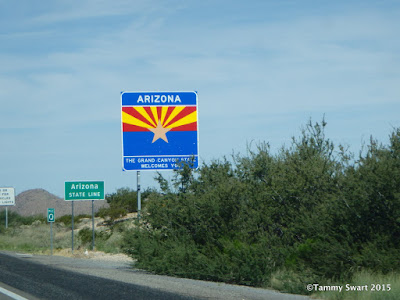 Next milestone was crossing out of New Mexico and into Arizona.  We traveled briefly through parts of New Mexico years ago on a trip to Colorado... but Arizona is officially new territory for us. 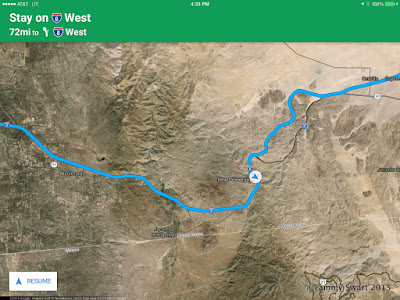 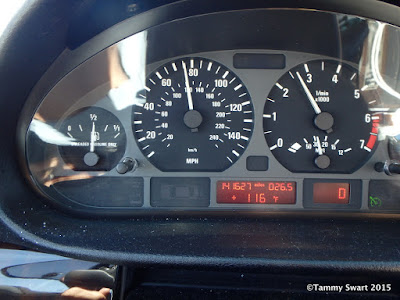 As the miles traveled continued to climb, so did the temperatures.  A friend had warned us that it was unwise to be in the desert in the heat of the afternoon... Not really having a choice, we would find ourselves in the hottest part of our trip during peak heat.

I watched... it rose and rose.  I wondered where it would top off as it got impossibly HOT!  We just crossed our fingers and hoped the car would not fail us now!

The terrain became more rocky and we began to spot saguaro cactus along the way. (sadly no pics!!!)

Somewhere along the way we got a messaging on the iPhone welcoming us to the US and telling us their prices for internet data.  WHAT???  I freaked out a little!  We weren't data rooming!  We are STILL in the US!  But I guess we got close enough to the Mexican border to confuse the iPhone!  Creepy! 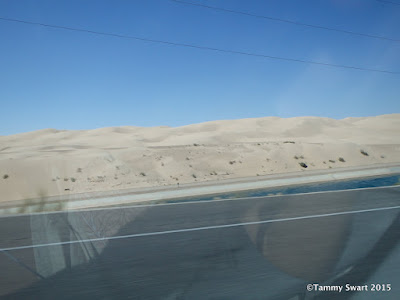 The California border was suddenly in sight.  There was an abrupt change in scenery as we crossed in.  From a distance we could see huge sand dunes.  HUGE. Sand. Dunes.

I know I'm easy to thrill, but this was WAY cool!  There was also a ribbon of water snaking through this arid landscape carrying sparkling blue green water to somewhere... 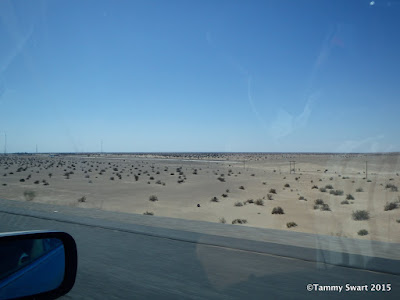 Just as suddenly as the dunes appeared they were gone.  We traveled along for a while with flat nothingness as far as the eye could see.  The Colorado Desert, which is part of the Sonora Desert, where we were surprised to see that we were at sea level.  Shortly after that, we went even lower to almost 300 ft BELOW sea level.  (creepy fun facts) This is where the heat really hit it's peak and I kept thinking it would go impossibly higher than 116°... but it never did. 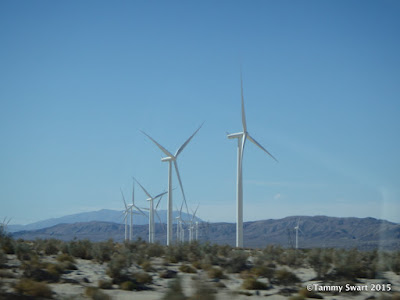 Then began the foothills of the Laguna Mountains where we began to see huge wind turbines slowly spinning.  I love them.  They are so majestic and I think of all that lovely wind power. 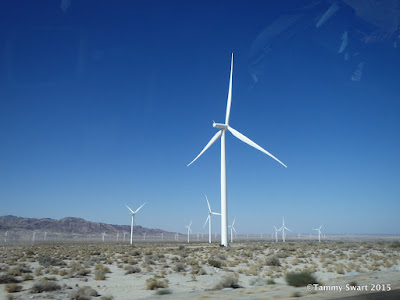 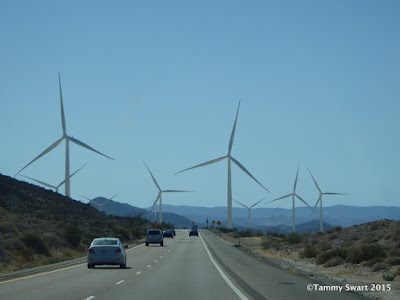 We drove through several fields of these gentle giants.  What fun it was to speed along right beneath them.  We have these in Texas, but it wasn't until after a lengthy battle with birders.  Their fear was that the swiftly moving arms of the turbines would kill birds as they moved through the air at deceptively high speeds.

California doesn't seem to have such problems as they have wind AND also many solar fields to harvest alternative energy resources.  I guess the stranglehold of Texas Oil just won't let progress happen. 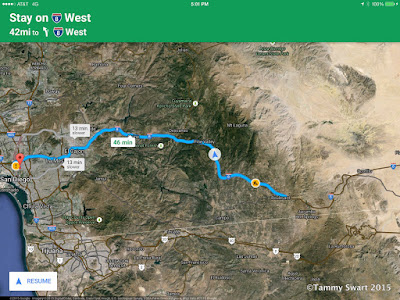 I was excited to see the mountains and thrilled at ever thousand foot mark.  One Thousand, Two Thousand, Three Thousand feet.  And then passed a sign signifying the Continental Divide!  What??? Awesome!

I was nervous about the sounds our car was making as we climbed higher and higher.  Bruce was using the manual function on our car and it sounded like it was working as never before.  We just aren't used to driving in the mountains... Bruce may have made some uncharitable suggestions as to what I could do with my advice... as we made it up and over one summit after another. 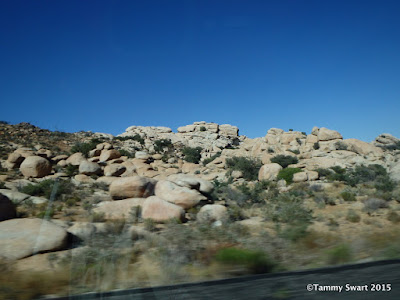 The eastern side of the mountain range was decidedly rocky.  Just pile upon pile of loose boulders and scrabble.  Vegetation was sparse and in many places, nonexistent!

At some point on the way up, Bruce mentioned that maybe we should have stopped for gas before we entered the mountain range... There were some tense moments as I quickly scrambled to find a nearby gas station... in the mountains.  Lucky for us, there was one in the little mountain town called Pine Valley.  Very cute, but very expensive gasoline...  Beggars can't be choosers... 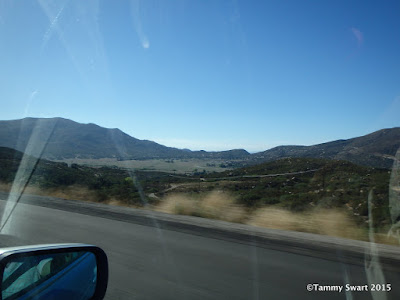 We took on a few gallons and continued on our way down the green side of the mountains.  Temperatures that had dropped into the high 90s as we climbed, were spiraling downward the closer we got to San Diego.  We were astounded to see them fall into the high 80's!!!

We had traveled over 2, 600 miles (over 2,311 nautical miles). That's about as far as we traveled on the boat during most of our first year cruising!!!

We did it all in only four travel days... very fast.  We hope to take a little more time on the return trip after the wedding and see some sights... maybe take advantage of some of those photo ops that went by in a blur.  What an awesome opportunity this is for us. We will soon have our first glimpse of the Pacific Ocean!