The first images that flitted through my mind as I awoke this morning, were of the people we've seen and the fun we had at our Bon Voyage party(s).  This weekend, we put aside boat projects and spent time with our family and friends these last days before the jig is up for us... we have to go. 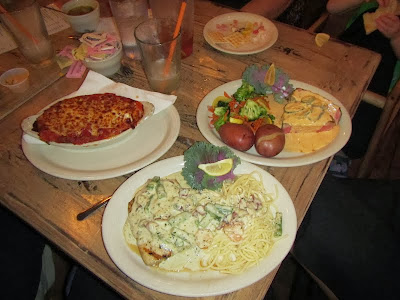 It began on Saturday evening with the MOST delicious dinner at Jay's S&SW.  The place is a bit pricey but it is really my personal favorite in Port Aransas.  The sauces keep this restaurant at the top of my list and the Lasagna is Bruce's fav.  We spent an enjoyable couple of hours with our little family over food, drink and laughs.  I'm sure the waiter thought we would NEVER leave!

We had hugs and good-bye's all around in the parking lot, where my Mother told Bruce... "If you get tired of her, don't put an anchor on her, just call me and I'll come get her".  Thanks MOM! 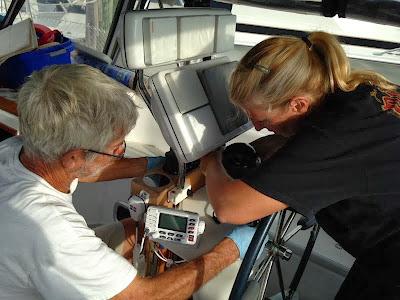 Sunday morning, we got to work removing the dock lines for good.  We were nearly done when Bruce realized that the engine wouldn't rev when the throttle was pushed forward or backwards.  So, as is usual on boats, we tore apart the pedestal and found the culprit... There was a cotter pin missing that held the cable to the throttle.  We found one in our outboard parts bag and in an hour or so, had it working again.  We were GLAD that this happened at the dock instead of out on the water!

The winds were light and we had little trouble disconnecting the boat from her home of nine months to move the short distance to the long transient dock in our marina.  It will be an easier departure point and the long dock is a better place for a party than our old slip. The Marina people were so nice in letting us hang out over here for our last day.  In fact, they've been nothing but nice and accommodating to us for as long as we've been here and we'll miss them. 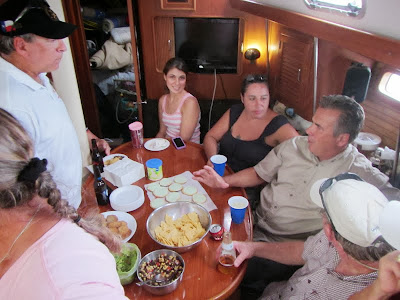 We were still cleaning the deck when the first guests arrived.  Very soon, the salon was filled with friends.  Brittney had chips, dips and cookies set out and one of our friends, Andy... was the man of the hour with his gift of Pain Killers! Bruce was busy making one batch after another of the delicious familiar (to sailors) drink.  Thank you ANDY! (glad you brought that second bottle of rum) 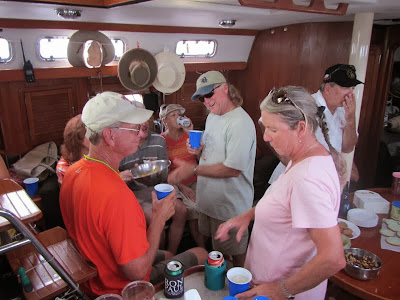 Bruce and I felt a bit amazed at the fact that ALL of these people put aside their Sunday afternoon plans, to spend the time with us and wish us well. 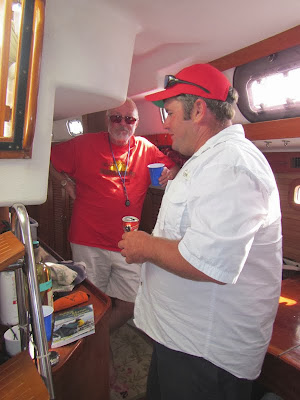 Very soon, there was literally standing room only in the salon... the AC struggled to keep up, but nobody seemed to notice as we told our plans over and over with each new guest's arrival. We spilled out into the cockpit, thankful for a bit of cloud cover. 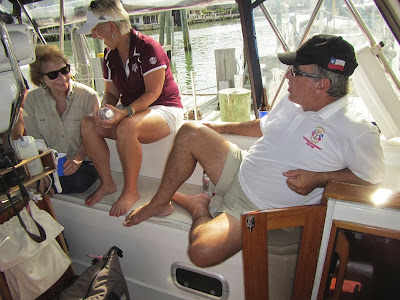 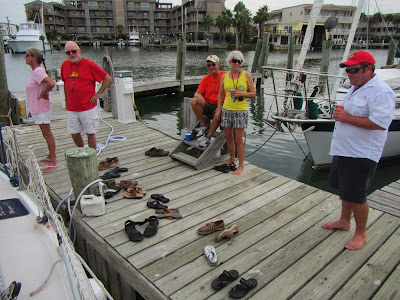 And then... we spilled out onto the DOCK! 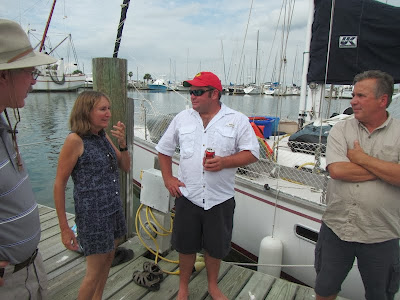 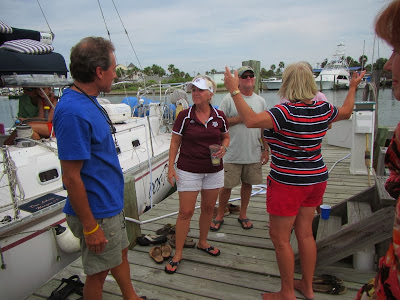 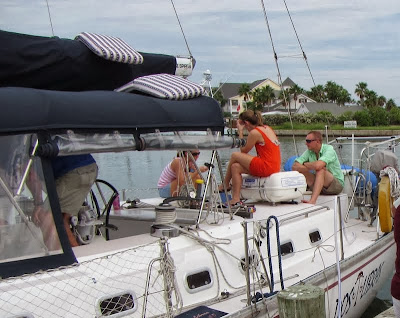 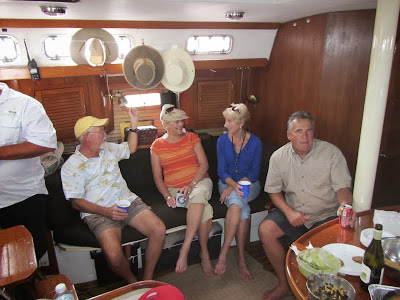 Things leveled out as the afternoon passed... people began to leave as new ones arrived.  We had time to talk to folks a little more.

We had specifically requested no gifts, as we have NO room to spare on board... But several of our friends brought offerings of spirits and things.  We received a pair of Dyneema shackles, A set of Gecko Grips, (created by our friends Mark and Julie) a dedicated copy of Sailing with Rhyme and Reason, written by our friend and guest, Bob & K, and several bottles of wine, which will come in handy when the ice runs out!

When the last guests departed, we were left with huge hearts full of the well wishes of long, and short time friends.  The party could not have gone better and we feel deeply honored by all of it.  We did take a fair amount of ribbing when people found out that our first destination was to be Rockport, TX.  Only a short hop away...  But hey, it's not like we're getting on a plane to be in Las Vegas in three hours... Cruising is a slow process. 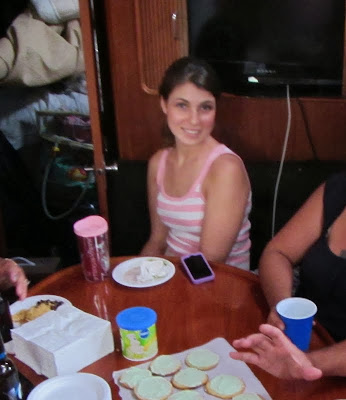 Now comes the time when I find it most difficult to push back the thoughts of leaving our most important guest... our Daughter, Brittney.  She has been spending every free minute squirreling away "Mamma Time" for weeks.  She has sailed with us, she helped with this party, she has paid for numerous dinners (I love having kids with jobs)...  If I let myself get dramatic for a moment (I did), it's difficult to sail away and leave her home.  But, if I don't get dramatic, and just remember that we'll be sailing just like it's one weekend after another, it won't be long until she flies to visit us in some future destination.  We will be together in spirit through the miracle of the Internet and it will seem like we never left.

This is only possible because BOTH of our children are the most awesomely responsible adults a parent could wish for, and we are SURE that they can take care of themselves, much to our immeasurable pride.
Our departing song...