Anchoring out overnight isn't the same as it used to be when we didn't live on the boat.  Bruce used to pack on all the gear and we would rush like mad on Saturday morning to get out of the slip... Now, it's just put some things into a box so they won't crash around and take off!

Our old friends at Bay Yacht Club in Corpus Christi had a weekend cruise planned.  We quit the Club months ago since we wouldn't be in Corpus much and were cutting expenses for cruising.  We figured that we would be welcome if we crashed their cruise and we actually had invites from several members so we didn't feel too much like bums. 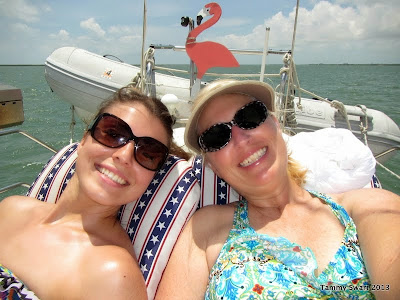 Midmorning on Sunday, we got a call from our youngest daughter which ended in a postponed departure but the addition of two to our crew...  I'm thrilled to spend any time we can get with Brittney since she's been so busy with college for so long... She and I left Bruce to man the helm while we lounged on the back deck and enjoyed the view. 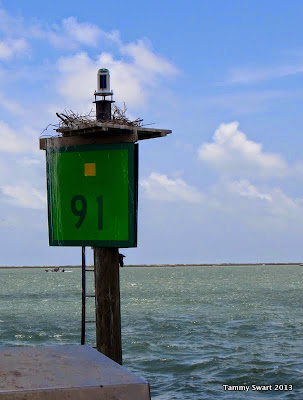 We passed one channel marker with a rather large nest covering the platform.  Judging from the number of Frigate Birds flying overhead, I think it must belong to one of them.  We didn't see Frigates anywhere else along our route.  I love seeing them.  They are so majestic.  Brittney and I watched them soar and swoop until we sailed out of sight. 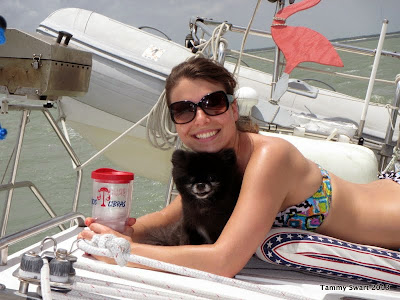 We had an absolutely gorgeous sail.  The boat handles so well... we're still getting used to it after over a year!  Brittney had Leila to contend with the whole way.  The little brat is going to leave some strange suntan lines on her doggie-mamma. 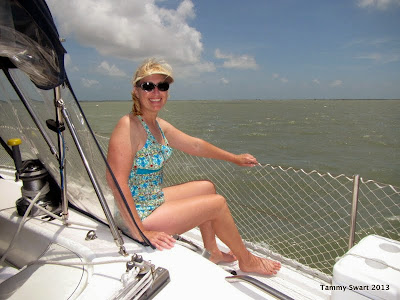 I roused from my drowse to discover that it was time to turn out of the ICW towards our destination.  We could just make out the many boats already tucked into the anchorage behind Mud Island.  The day was so beautiful I could barely contain my enthusiasm.  I LOVE THIS BOAT!

We sailed across the bay with just a little chop which decreased as we neared the Island.  The winds were about 15-20 knots from SSE which made this anchorage perfectly flat even with the forecast increasing winds. 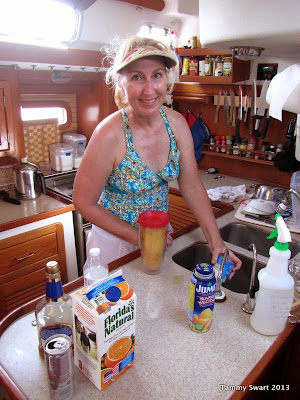 We picked our spot next to Second Star and dropped the hook.  Time for a beverage!  Mark and Julie dinghied over for a chat and to invite us to the Club dinner ashore.  Meanwhile, we got a call from one of the other Club Members inviting us over to the Host Boat for a swim followed by dinner ashore.  We were overwhelmed with the warm welcome.  While we made the right decision in leaving the Club... we still miss our friends there. 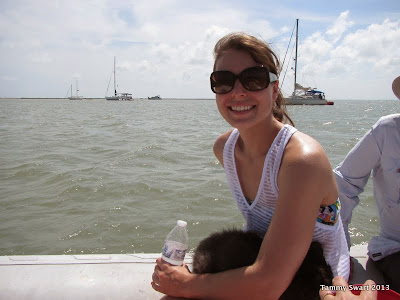 We ended up not quite making it over to Endless Summer for a swim with the group.  We splashed the dinghy and loaded up for a quick trip to shore. 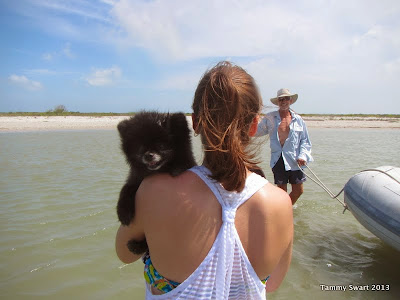 Leila (the dog) has been out with us on the boat before... but it isn't her favorite thing in the world to do.  I think she figured since her momma was here, she would be going home soon.  Imagine her chagrin when the day wore on and no offers of return to home came her way.  She clung to her momma as we waded the last few yards to shore. 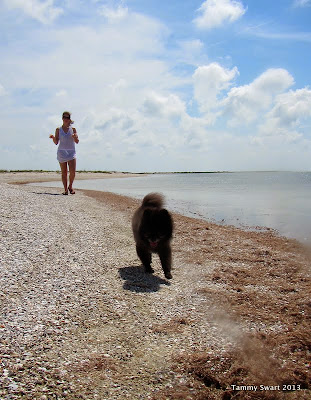 She perked up when she learned that this event was all about HER.  She had a blast running up and down the shore sniffing out all the stinky stuff!  Brittney followed her dog... 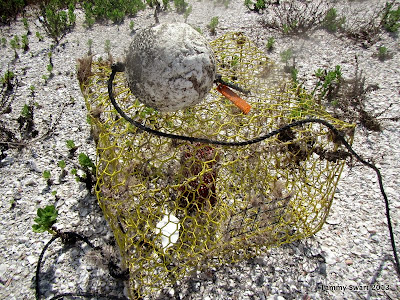 While I took a walk.  I love combing the beaches of these little islands where few people go.  You never know what you're going to find washed up.  I wanted to take this crab trap home with me but Bruce said "NO".  No more crap on the boat!

But it's such a NICE one and you can see that it works!  Look at that dead crab! 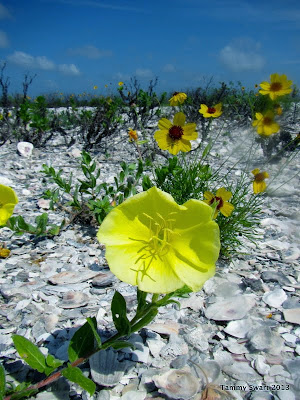 Looking at the island from a distance, it seems quite barren.  Upon closer inspection, it reveals a world of tiny beauties for the more attentive passer by.  I don't think I'll ever tire of beachcombing...

We detoured to visit a couple of boats on our way back to Dos Libras.  More invitations, yes, yes we're coming.  We ended up being a little late because we had to thaw out our steaks and come up with a side to share at the pot luck.  We packed up our potato salad and headed back to shore. 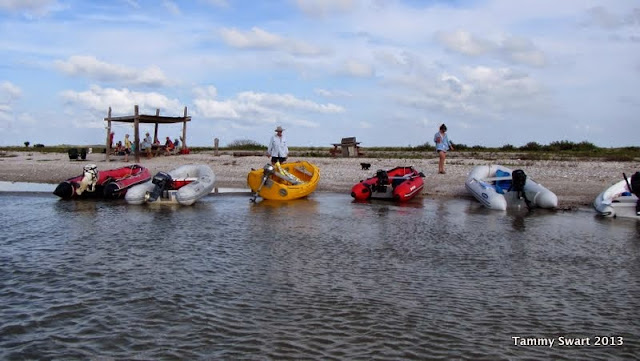 I think we were the last boat to arrive but we hadn't missed a thing. 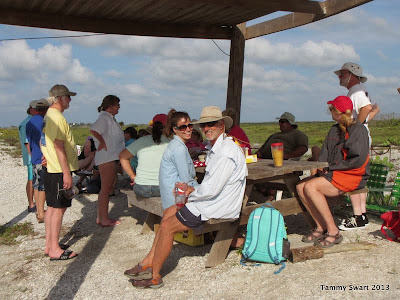 We had a great time catching up with Clubmembers we knew and were happy to see so many new faces out with the Club.  It's good to know that they are thriving in our absence.  All the COOL people were there!  We're looking forward to spending some more time with friends anchoring out in our "old stompin' grounds" before we head East. 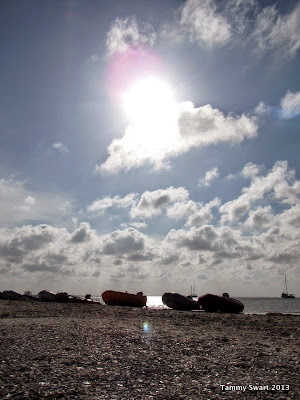 We finished grazing on all the goodies offered and judging from the angle of the sun...it was time to head back to the boat.  We didn't bring a dinghy light with us and needed to get back to our sulking kitties.


We posed for a picture from shore as the crowd broke up and everyone returned to their floating homes. 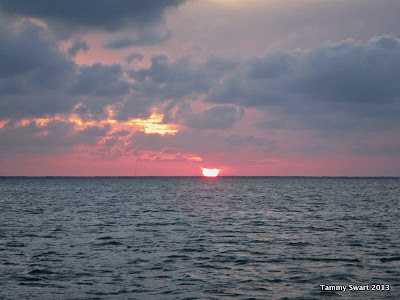 I'm sure we were in bed by "Cruiser's Midnight"(aka 9:30).  But we did enjoy a very colorful sunset for our troubles.

I slept better than I have in a long time, even with the dinghy slapping behind our aft cabin.  The wind never died down leaving us with that sticky melting feeling in the night that can sometimes happen in our cruising grounds.  My plan to sleep "late" was foiled by a restless feline.  Jetsam wanted to do her deck rounds so I got up and let her out. 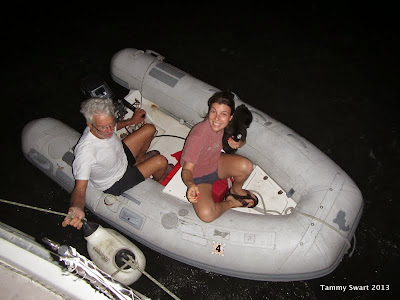 This prompted a voice from the v-berth, where Brittney and Leila were sleeping... "is it too early to take Leila to shore to go potty?"...  It was 4:30 am, but whatever!  The whole household got up and Bruce drove Brittney and dog to shore.  (I'm glad she didn't get eaten by a coyote... I was worried)

I sat and waited while they were gone.  I enjoyed the breeze blowing through my hair and I was queen of the most magnificent of views.  I don't think the rest of the world knows how often we are treated to world-class views for FREE!  If they did, there would be a LOT more people out here enjoying sailing. 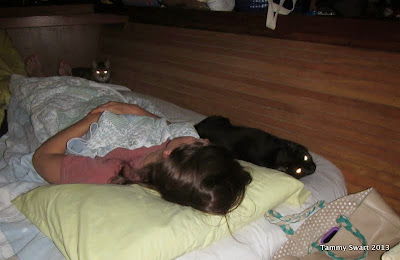 Bruce made coffee upon his return and fed the kitties (who are still sulking).  Nobody drank the coffee, opting to return to bed.  This time, the kitties hid in Brittney's room and weren't budging just because she and her dog came back to bed.  I got a kick out of all they eyes staring back at my when I peered in... 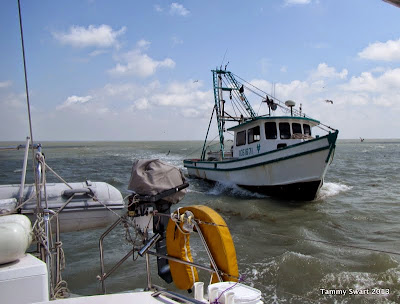 We had a nice nap then tried again after 7am.  This time, getting up took.  We made one more trip to shore for a potty run, then weighed anchor and headed for the slip.  We didn't sail due to the winds being on our nose the whole way, but it was still a pleasure to be on the water.  We had to dodge shrimpboats all the way home.  Don't these guys ever get a holiday???  As we motored along, I kept thinking... soon, many of our days will be spent just like this.  But until then... I'm glad we were (finally) able to get "away".