With the winds being what they were this week, and the long list of things we still needed to get done on the boat before we felt we could relax and enjoy it... we have spent much of this week doing what one would not usually call vacation activities.  This is OK.  I would rather spend a work day on a boat than being at my actual work... any day!


But finally, on Saturday... the winds finally let up and instead of digging in for the final push of getting our AC ducts in and the last of the mildew cleaned off the ceilings... Bruce convinced me to go and play! 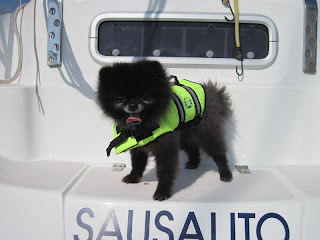 We strapped Leila into her tiny little life vest and splashed the dinghy. 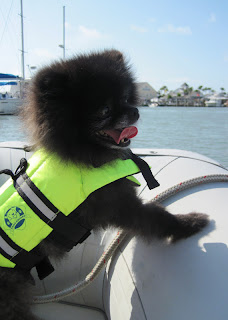 We were headed for Anchor Hole.  Bruce and I have named our favorite swimming hole on the Aransas Channel near the intersection with the Lydia Ann Anchor Hole after finding a very nice new looking anchor just sitting there last year.  It's usually very good swimming with clear clean water and a shallow sandy bottom. 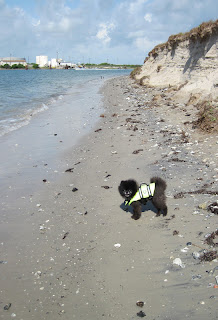 Today it was a bit cloudy after recent winds, and there was an endless parade of motor boats buzzing by making a constant breaking wake on our shore.  This didn't deter me from trying Leila out with her life jacket.  She was happy trotting along the shore with no leash and seemed game when I went into the water and began to call her.

She tentatively stepped in and got lapped in the face with a couple of tiny waves, but she was a trooper and kept on coming until finally she gave a final leap and was swimming the last couple of feet to me.  She climbed up and clung for dear life and I could imagine what was going on in her little head:  What have I DONE?  We rode the waves for a bit then decided to go to the opposite shore on the Lydia Ann Channel to see if conditions were any better. 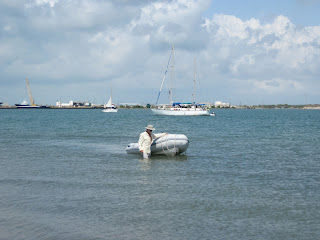 By this time, the sun was up and made the channel waters an incredible blue green.  Birds were diving on the fish and the parasail boat was out with their colorful parachute up.  There was a lot of traffic on the water this Father's Day weekend.  As we neared the shore, Bruce changed course and headed straight for a wrecked sailboat.  He wanted to check it out. 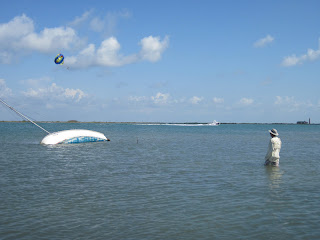 The sailboat has been beached on its side for weeks with no story reaching our ears as to what happened.  There is also a beached catamaran nearby on the Lydia Ann.  Must have been some storm...  We beached the dinghy and let Leila run.  By this time she knew the drill and seemed to be very happy to buzz along the shore with her little life jacket no longer causing her a moment's pause.
While Bruce waded over to the sailboat, I tried again to convince Leila to come into the water.  She really wanted to but just couldn't bring herself to make the leap again once the water got to her chest. 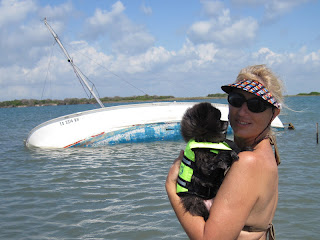 I got her and waded over to the sailboat while she clung to my shoulder.


On our way back to shore, I decided to see if she could swim back herself.  I put her into the water and she took off following Bruce as he waded ahead.  She decided that he wasn't going to get her or was going too fast for her so she aborted her course and circled back around making a speedy B-line for me.  I haven't laughed so hard in some time and luckily, got it all on video.  She is just too cute! 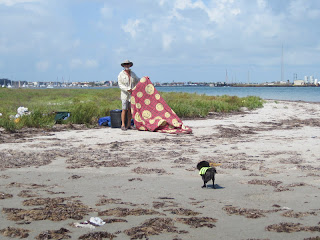 Bruce and Leila explored the shipwreck's belongings washed up on the beach.  Some blankets and a few clothes.  I wasn't going near that stuff.  Bruce got into some sand fleas and I decided it was time to bail on St. Joe's Island.  Besides, we still had work to do. 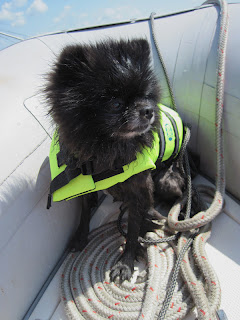 The ride back to the boat was too long for Leila.  She was tired out!  She tucked her tiny face under my life jacket and tried to sleep.  We are starting to think we might need to up her food rations if we are going to fill her days with swimming and boat rides.  She's used to a much more sedentary life. 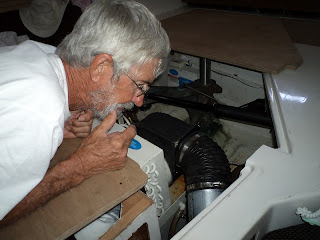 Once back at Dos Libras, we washed everything up, had lunch and got to work on our final AC project.  Some of the ducts had been removed while the previous owners cruised in Europe.  We needed to replace them.  Bruce and I tore into the aft cabin and after several hours, had it all done except for one clamp.


We left to get one at the Ace Hardware.  They were closed so we found one at the Biltmore.  Bruce remarked about the uncommonly heavy traffic.  The guy told us that there was a fishing tournament, which we knew... and that Pat Green was to play a concert at the Robert's Point Park.  We abandoned our plans to find some fresh fish for dinner and raced back to the marina to get a parking place.


We finished our AC project and turned our thoughts to dinner.  We could take the bikes and go out in search of food or I could just forage on the boat and make due with what we had.  With my new Frugal Cruiser mindset, I opted for the latter and set to work digging through cabinets and floor lockers. 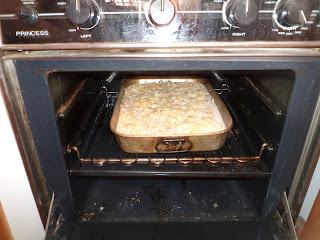 Once I had a concoction thrown together in a bowl, adding more cheese thinking I could eat anything with enough cheese... Bruce came by and took one look...  What is that SWILL? he asks.  That's your DINNER you're calling SWILL...    I popped it into the oven and we retired to the cockpit to await the finished product.


While we enjoyed our sundowners, the Streeps stopped by on their way to go walking out to dinner.  After a couple of beers, I convinced them to share our SWILL with multiple disclaimers about quality but no fear about quantity.  The plan B would be, if it's not fit to eat, we can ALL go out to dinner.  I must tell you that the last time we had dinner with the Streeps, it was a wonderful wedge salad, crab legs and porter house steak.  My SWILL would be found wanting no matter what!

They were good sports and I guess it was better than leaving our nice cozy marina to brave unknown crowds of concert goers and tourists...  We had a delightful dinner and they were at least very polite and had seconds of the SWILL.  We ended our evening as we often do with the Streeps, comparing iPad Apps.  It was altogether a FUN DAY!