For months, our lives have been consumed with the selling and buying of boats. All through these months we've had a vision of how it would be to sail, anchor out, and swim off the boat with our family and friends.  This Memorial Day weekend was the realization of those dreams and visions...


We arrived at the dock on Saturday mid morning and found it alive with activity.  We love hanging out with our dock mates but sometimes it's difficult to focus on getting under way with all the goings-on.  We did our best to get things loaded on and stowed away so that we could cast off and head for Ingleside Cove.  We had plenty of help with the docklines as we were the first of the four boats from our dock to get going.


Ahhh, this is it!  We had a very favorable current in the Channel and once Bruce got the sails set, we did a steady 8.5 knots all the way.  This made for a very short sail to Ingleside on the Bay.  The Channel was a muddy brown from the week of big winds but once we turned into the La Quinta Channel, the water cleared to an inviting clean green. 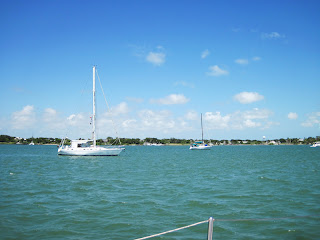 We motored to our remembered turning point and nosed our way in to the anchorage where we found several boats already settled in.  BYC had an official Club Cruise planned for  Spinnaker Hole, but with the kids driving out on Sunday and the winds still piping up, we opted to stay on our side of the Bay.  There were six BYC boats and four others in all spending the weekend in IOB. 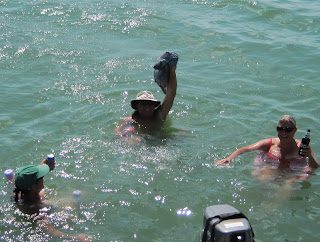 We are a bit slow in getting things settled these days as we're still developing our "system" on Dos Libras.  We got squared away and splashed the dinghy for the first time since DL arrived home.  By this time there was a parade of dinghies headed for Merlin's stern and we grabbed a beverage and a couple of life jackets and joined the fray.  The winds were cool but the water was inviting, warmish with cold pockets drifting mysteriously through.  BRRrrr.  We had the usual blast floating with our fellow sailors.  It's not something that can be described to the casual observer, more of a Ya-had-ta-be-there kind of thing, complete with a spare pair of swim trunks waived overhead...


We floated until our toes were prunes then dinghied back to our respective boats to shower and change for dinner.  Bruce and I took a short nap and relaxed for a while.  We had a dinner reservation back aboard Merlin and we arrived just in time for the salad course.  We joined Bill and Jan (plus  daughter and guest) with fellow guests Mark and Brenda for a Bar-setting dinner of wedge salad, crab legs and Porter House steak (that barely got touched once we finished with the mountain of crab legs...).  Luckily for Bruce and I, the festivities wrapped up fairly early as the rest of the attendees had round one on Friday night before we arrived at the dock.  After dining and watching an episode of the Dick VanDyke show, we dinghied back to DL for a nice cool night's sleep. 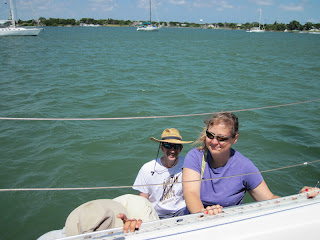 We had our coffee in the cockpit and generally enjoyed the fruits of our efforts these past months as we soaked in the beauty of a quiet morning at anchor in the Cove.  Soon our chore list beckoned and we set about our self imposed duties.  I did some cleaning and prepared the V-berth for the arrival of Melissa and Michael.  They were driving in to spend the night with us and we had piles of stuff in their bed that had to be redistributed.  Just about the time I was at a stopping place, we had some visitors.


Ron and Jo had yet to see our new boat.  They have a Morgan 44 and wanted to see what the similarities were.  There are things we like about their boat and vice versa.  Neal and Teresa arrived and I went another round with the tour before we settled in the cockpit for snacks and drinks.  It's so nice to have the space for entertaining.  Melissa and Michael arrived at about the time this little party was breaking up. 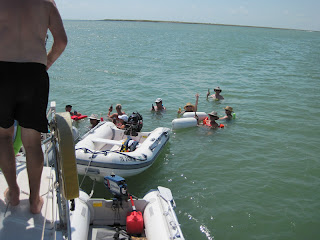 Next thing we knew... the fleet gathered at our transom, dinghies rafted up and the moment I had been waiting for was here!  We were the "Coolaid Boat"! 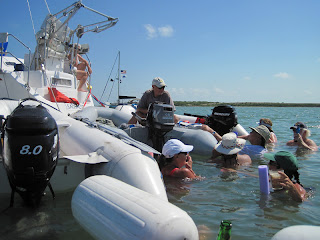 The gang was gathered, they floated, they clambered aboard, they sunned themselves, they went for refills... There were stories flying and laughs all around.  What happens in the Cove, stays in the Cove. 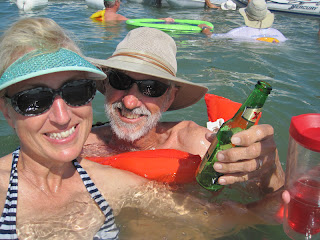 Bruce and I had our "moment in the sun"!  It was great! 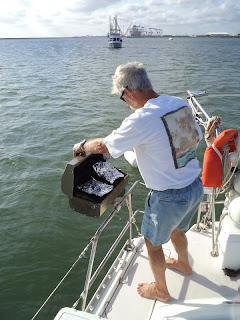 Four o'clock arrived and like fog, everyone disappeared to their own boats to make ready for the pot-luck ashore.  Bruce and I opted out so that we could spend time with the kids.  We had a quiet evening making dinner on the grill and in the galley, and watching the spectacular sunset.  Not long after dark, we were all ready to turn in for the night. 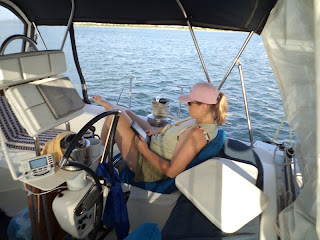 Monday morning we shared our favorite activity with the kids... coffee in the cockpit.  Bruce and Michael had fishing plans and Melissa and I spent the time relaxing and reading.  Ahhhh this is just what my busy daughter needs.  She was forced to relax.  I think she's adjusting well to boat life. 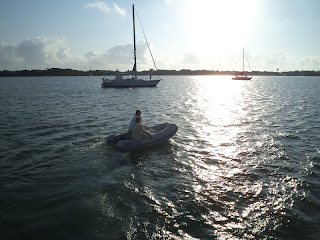 The boys set out in the dinghy and were gone for a couple of hours.  Melissa and I made breakfast and had done eating by the time the guys arrived back at the boat.  They had some small success, in that they caught some small fish.  No keepers but at least they caught something. 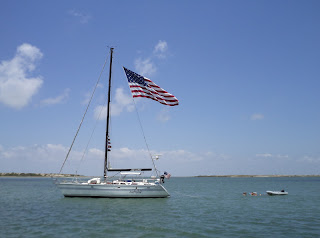 We talked the kids into sailing back to Port A with us.  By the time we left, only Merlin and Griffin were still in the anchorage.  They were having a nice float before Merlin upped anchor and followed us home.

We had a nice dolphin show leaving the cove and a great sail back.  This was Michael's first time sailing without it being a race.  I think he likes cruising better!  We ended our Memorial Day weekend with a nice dinner then the we went our separate ways.  This is the first of many good times in our new "Coolaid Boat".