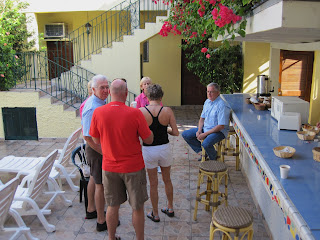 After a peaceful night's sleep, where I heard nothing of the party the others in our group said was going on outside our door, we congregated in the breakfast area by the pool to decide upon a plan. 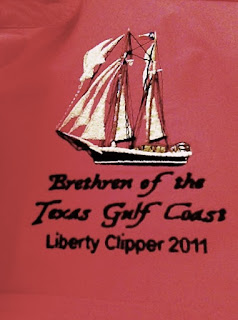 We had brought along group fishin' shirts with the logo the Spences and Bruce and I had dreamed up while out sailing one day before the trip.  The ship is the one we got from the Internet and the embroidery shop did a fantastic job of rendering it in embroidery.  We decided to wear these today so that we could more easily spot one another in town and make a grand group entrance when we arrived at the boat later that afternoon. 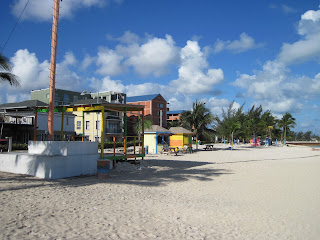 We milled about for a while, had a bit of toast, which was the "breakfast" offered by the El Greco, then Bruce and I set off on a walking tour of the town.  We made arrangements to meet the group back at the hotel later, since we all checked out leaving our bags in the courtesy room, we would take a cab to the Marina.  We weren't allowed to board the Liberty before 5 pm but could bring our bags over starting at 4 pm or so.  Anyway, Bruce and I headed out for a look at our beach in the morning light.  The People Watching there was interesting and that's all I'm going to say... 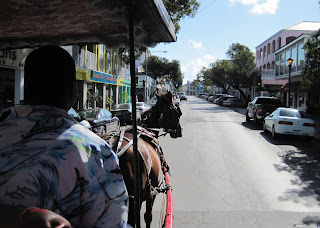 We caught a passing horse drawn carriage about a block from our hotel and hitched a ride.  I've always wanted to do this and was feeling decadent so up we went.  It was great fun.  The perfect way to get our bearings of the town. 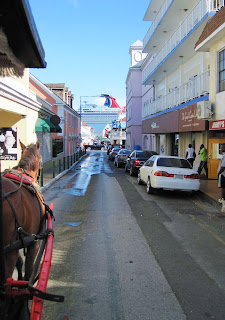 The driver took us along the waterfront tourist area, the shops one block in and then turned up to take us through the historical area. 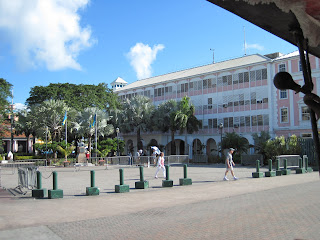 He pointed out some of the old government buildings and gave us a bit of history, which was right up Bruce's alley, but of which I can remember nothing. (of course)... 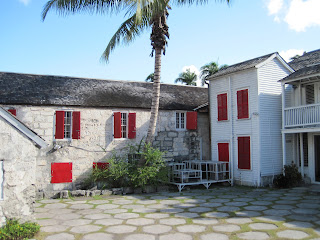 We saw some of the homes, all very tropical/colonial.  We once again marveled that we had been told this place was dirty and crime ridden.  I've seen areas of my own town that fall far below anything we've seen here with the added criminal element that we've seen no sign of here. We marvelled that some of these buildings dated back to the 1700s or earlier and are still not only standing, but in use. The Driver dropped us off at the waterfront near the cruise ship landing.  There were 3 or 4 cruise ships docked while we were here.  They're HUGE.  This is a ferry boat that was hanging out near the landing, my guess is it's an inter-island thing. 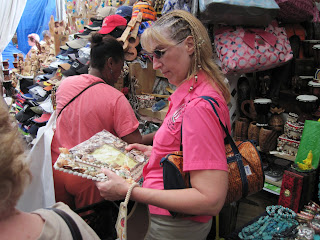 Coincidentally, he dropped us off very close to a sprauling shopping mecca.  We cruised the aisles of this GIANT tent-like structure with hundreds of individual vendors all standing in the way trying to keep you from going by their section too fast.  I was close to buying this frame but figured it wouldn't survive the trip home. 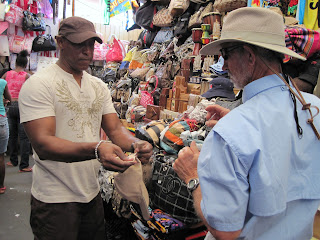 Bruce even got into the shopping spirit (sort of).  He must have tried on a dozen caps but none worked.  He finally found one at the end of the day.  It came with a shirt to match and I bought a set myself.  (I have since lost my hat in that hellish Port A Race and so will be commandeering Bruce's, so technically, he has no Bahamas hat.) 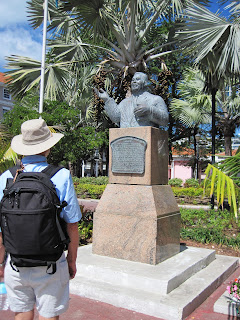 We shopped until we realized that it was all the same stuff, the set off on a walking tour to check out some of the things we had seen from the horse carriage.  Bruce is soaking up some of the Bahamian History as he reads the Memorial to Sir Milo Broughton Butler, the first Bahamian Governor-General in an independent Bahamas. 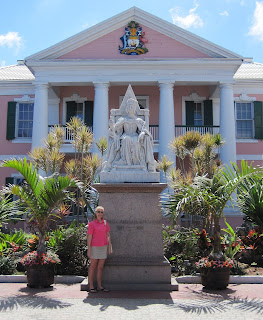 We marvelled at the beauty of the House of Parliament built in 1805.  There was a bit of maintenance going on but I guess that's a given with a 200 year old building. 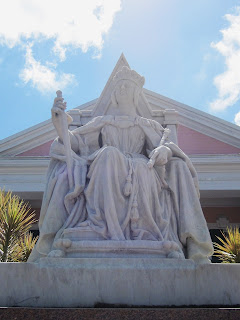 A statue of a young Queen Elizabeth stands in front of the building.  I've developed a fascination for marble statues in my travels.  I could stand and gaze at them for hours. 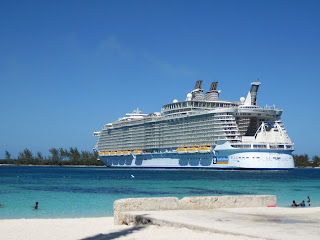 The day became warm.  We rested in a shady quare for a while, then found some of our Group and shopped our way back to the beach in front of the hotel.  We watched as two of the cruise ships backed out of their slips, turned these giant ships around in a very small space and sped away. 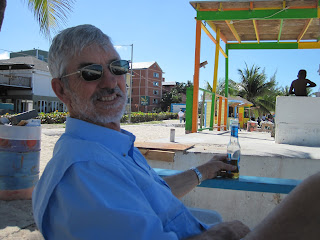 We had a nice frosty beverage sitting in the shade of a palm tree.  I found it hard to imagine that while we were sitting on that beautiful beach in Paradise, our friends back home were carrying on with their lives, the most interesting thing going today being laundry and grocery shopping... 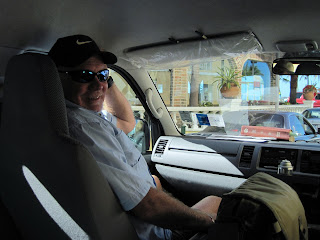 Our group gathered at the appointed time and we all piled our gear into a taxi van.  The cars drive on the other side of the street in the Bahamas.  My addled mind was puzzled by Chip being in the "driver's seat" for about 15 seconds before I woke up and realized that he wasn't.  There, I admit it.  I'm getting old and my mind is slipping... 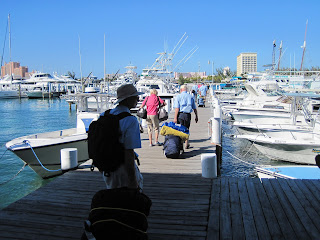 We had considered walking to the Marina because we had been told it wasn't far.  We were very glad we had decided to take a taxi because it WAS very far, considering lugging bags and all.  The Yacht Haven Marina was very nice. 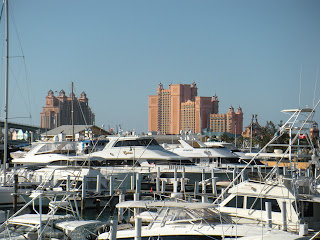 I can totally envision Elan (or our next boat) being in a slip or anchored just outside the Marina waiting for us to come back with provisions. 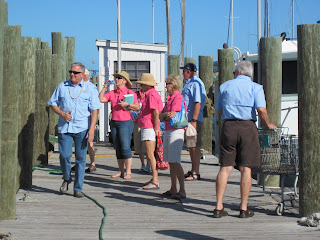 But for now, we had the Liberty Clipper waiting for us at the end of the dock.  We piled our luggage just off the gangplank to await our boarding time and took off to have some drinks at the Poop Deck. 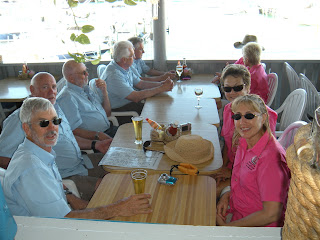 We had to wait a bit for a table to be set up for the 10 of us but it was worth it.  We passed the time talking to a cruising couple at the bar who had 3 months in the Bahamas ahead of them. Some day... We had a grand view of the marina with the bridge to Paradise Island and the Atlantis resort in the distance and the setting sun. 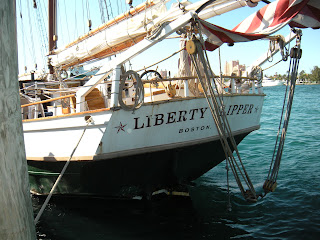 Finally the time came for us to board.  We left the Poop Deck with a reservation for dinner later in the evening. 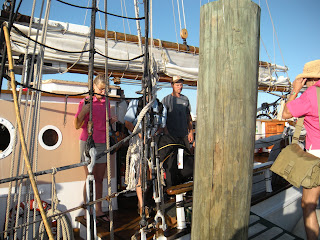 We boarded and took our baggage down below decks to our appointed rooms and checked out the upper deck for a bit. 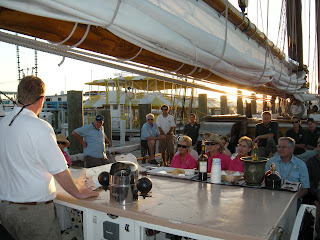 We had a short orientation delivered by our Skipper.  We began to get acquainted with our shipmates from all over the US and Canada at the "meet & greet".  There were snacks, beer and wine for us then back to the Poop Deck for dinner and an early night.  We would leave the dock in the morning.  Our "real" vacation had finally begun.